The current territory extends from the mouth of the Kusquqvak River to the village of Kuiggluk and north to the tundra surrounding the southern parts of the Nunavakpak Lake.

The history of the Kiatagmiut Band dates back many millennia. The Eskimos crossed later than other Indian peoples.

Some time around 1640, the daily life of the Kiatagmiut peoples began to change significantly. This was largely the result of the arrival, around 1637, or luussitars, or what the rest of the world would go on to call horses. This change, while only recorded in the oral historical record, was undoubtedly the cause of a massive shift in the way the Kiatagmiut lived.

The first major shift came when, in 1638, the luussitars were used effectively by young Kiatagmiut warriors to defend, and eventually conquer, the Akulmiut peoples of the villages centered around Kassigluq. By 1639, another war, this time against the Unegkumiut of Naparyarraq, expanded the Kiatagmiut Band, then under Great Chief Kayuqtuq, to enough of an extent so that an intensive societal reform could be instituted.

The Amellrutaq met in the winter of 1639 at Mamterilleq, and decided upon Kayuqtuq's reforms, called the Lavkar Reforms, which involved the rotation of those workers who would collect food and those who would build infrastructural and crafts improvements.

After the Lavkar Reforms were first tested in the 1630s, the Kiatagmiut continued to advance. Trade with other Kusquqvagmiut peoples along the Kusqusvak River, the Band came to be one of the primary groups in southern Kelutmun. Economic growth was extremely surprising to the Kiatagmiut leaders, who then began to fall into an organized shamanistic religion, with some emphasis placed upon the Cult of the Supreme Spirit which enshrined the Great Elder as being possessed by the most holy of shamanistic spirits.

By 1650, the year of Kayuqtuq's death, the villages of Iik and Tuntutuliaq had been conquered along with most of the Caninermiut. A small period of civil strife broke out between 1650 and 1651 as a leader was not appointed to be Kayuqtuq's successor, but Taktuq of Kuiggluk would end up being the next Great Elder. Additionally, the Lavkar Reforms had been reformed further so that even more progress was made and trade began to develop through use of qayaqs.

The domestication of wild crops them became a focus of the Band under the new Great Elder, Taktuq. This process began with berries, such as the bunchberry, snowberry and salmonberry, but trade eventually brought in other types of berries and roots that sustained life well. This farming venture was extremely successful and ended up eliminating the semi-nomadic culture in Kelutmun when coupled with the domestication of elk and reindeer, which began in the latter half of the 1600s.

The domestication of wild game was quite successful, and eventually a similar policy was applied to the domestication of wild walrus, which were extremely valuable for trade. This brought about great economic success for those who domesticated the walrus, and eventually it became a private enterprise. The Amellrutaq decided, in 1678, that domestication of walrus (and all sea creatures) could be done in a private fashion, which has been marked by many historians as the start of the free market system that dominated Kiatagmiut's development by the INSERT DECADE HERE.

As the domestication of flora and fauna was progressing, the qayaq industry only increased further. New technologies enabled the qayaqs to travel further distances and made them even larger. This qayaq improvement made it a mere week-long journey to travel from Mamterilleq to Saguyaq, the major port of the Curyung people at the base of the Nushagak River. Continued improvements would even significantly shorten this time by the 1680s.

By 1670, a small series of trading posts had been established along the Kusqusvak River, extending as far as Gidighuyghatno’ Xidochagg Qay’ to the northwest and Agdaaĝux̂ to the southeast. This projection of economic power led to an attack on traders in 1671 which in turn led into a war of conquest against inland Kusquqvagmiut people centered around the village of Qalqaq but spanning as far upriver as Gidighuyghatno’ Xidochagg Qay’. As a result of this war, trade with the Deg Xinag increased drastically.

After this war, expansion continued into Yup'ik lands, notably of the Nushagamiut and Ogulmiut peoples. Notably, after the death of Taktuq, the Great Elder, in 1678, his son became the new Great Elder, becoming the first hereditary appointment to the position.

Meanwhile, trade brought with it rumors of the "gods with the great qayaqs," who had begun to arrive in the Ale'ut lands. These were widely disregarded, but some traders sought them out. In the end, one of these "gods" would arrive within qayaq distance of the Kiatagmiut, and a period of contact with the East began.

While the official start of contact with the East for the Band was in 1675, the late 1660s began to see mass emergence of rumors and tales, often mythicized as was the artistic style of that epoch, of people who were called "the gods with great qayaqs."

The Eastern expansion into the Ale'uts was largely facilitated by the Mangut Nivkhgu, whose primary navigator and admiral was I'mlos'taga'in. I'mlos'taga'in was eventually lost during one of his expeditions and washed ashore upon a frigid northern isle. After having been supplied for a couple of years, he was brought to the capital of Mamterilleq in 1677. I'mlos'taga'in would play a large role in the court of new Great Elder Aklaq and provided knowledge of written language and boating to his hosts until his departure in 1682.

By 1685, the Nivkh admiral N'ot'am'or'on arrived at Naparyarraq, whereupon negotiations began between the Nivkh state and the Band. As a result of these negotiations, Kiatagmiut Band ports were opened to the Mangut Nivkhgu in exchange for greater knowledge of mining and ironworking. In 1690, the first Kiatagmiut individual, a walrus herder by the name of Saluntinuk, left the Band and travelled to the Nivkh state in Kamchatka.

The Kiatagmiut Band employs the same general legal system that was used during the nomadic days of the tribe. The main ideas behind Kiatagmiut law can be found in Yup'ik understandings of what it means to be human. They view mankind to be very social, and therefore have always accepted the following maxims as tantamount to religious law:

These four maxims are rooted back to the start of the Little Ice Age, in about 1350, when temperatures fell drastically, causing the emphasis on the need of groups in order to survive to permeate all Yup'ik culture. The Kiatagmiut doesn't have courts or a legal system like most of Europe, or the world in general. Instead, all decisions, both on planning and on disputes, are brought up before the Amellrutaq. There is both a national Amellrutaq and various local village Amellrutaqs.

The Amellrutaq, while not having a direct translation, is best defined as "rule of cooperation," and the following features define its use:

Some rules of the Amellrutaq are:

There are currently twenty-one permanent residential regions (be they cities, towns, or villages). The first five largest are listen in order of relative size, while the remaining are simply listed in alphabetical order.

Furthermore, the Kiatagmiut Band manages three trading posts. They are:

While Yugtun has two primary dialects (Kuigpak and Kusquqvak), Kusquqvak is the most spoken variety in the region where the Kiatagmiut Band resides. As such, the Kuigpak dialect is starting to become obsolete as most of the youth don't learn this dialect.

The traditional shamanistic religion of the Kiatagmiut band...

Led by the High Shaman, who oversees all of the angakkuqs.

Meeting weekly at the agayuwig, or spiritual house.

The Yup'ik peoples, from whom the Kiatagmiut culture emerged to be the dominant force, were divided into twelve territorially distinct regional groups tied together by kinship. These tungelquqellriit, or bands, are:

Note: Bolded names mean that the band has been absorbed by the Kiatagmiut Band.

Annual celebration in fall called Qawanerteliita, where for three weeks (right before traditional return to wintering villages) there is feasting and celebration as well as religious ceremonies.

Then, whatever could be hunted or gathered.

Now, a lot of berries (bunchberry, snowberry, huckleberry, salmonberry) and elk, reindeer, walrus, and seal have all been domesticated and made readily available for consumption by the Kiatagmiut people.

Pretty much a command economy based upon sharing.

Some industries are starting to privatize.

While relatively unadvanced when compared to European and Asian military technologies, the Kiatagmiut military technology and culture is very advanced for the northern reaches of Borealia. Among the primary weapons are the pitgar with qerrurs (bow and arrows), the kiipooyak (a throwing weapon comparable to bolas), the kakvikak (a three-pronged spear/harpoon), the tegun (or toggling harpoon, made with two blades) and the ulu knife (which was designed for butchering meat). 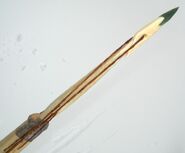 A tegun toggling harpoon
Add a photo to this gallery

In addition to an effective array of weapons, the Kiatagmiut are extremely well protected. Due to a combination of devastatingly frigid weather and dangerous animals, a unique lamellar type of armor was developed.

The armor has plates made out of different animal skins and walrus ivory, which are then bound together by tough leather made from sealskin. While traditionally this armor mostly only protected the chest and abdominal regions of the wearer, it has since been largely modified in order to allow full-body protection. Shields made of animal hides are also becoming more common for use in protection.

This advanced armor makes it very difficult for the Kiatagmiut people to be injured in combat; the armor cannot be pierced by most arrows. Additionally, this armor is quite unique to the Inuit peoples and therefore make the Athabaskan people less advantaged than their Inuit rivals.

Being the only organized state in Kelutmun (Alaska), the foreign relations of Kiatagmiut are mostly directed at various Yup'ik bands and villages.

This can best be seen with the extensive Kiatagmiut influence upon the Togiagmiut band, which was eventually integrated into the Band in 1660.

Retrieved from "https://althistory.fandom.com/wiki/Kiatagmiut_(Principia_Moderni_III_Map_Game)?oldid=1128121"
Community content is available under CC-BY-SA unless otherwise noted.