The Dutch Protectorate and Empire of Lanka (Sinhala: ලංකා ලන්දේසි රැකවරණයට හා අධිරාජ්යය) is a nation off of the coast of mainland India, on the island of Lanka, currently ruled by the Akash Dynasty. Lanka was founded on December 8, 1643 by the King of Raigama, Samir III. The empire is a parliamentary monarchy, with its capital based in Waardige. Lanka is split up into nine administrative divisions called provinces.

Raigama was established around 1415, when the Kingdom of Gampola split into three realms; Kingdom of Jaffna in the North, Kingdom of Kotte in the middle of the island, and Raigama surrounding Kotte. Although hostile to each other, Raigama and its two neighbors existed on island in peace. Through this time period Raigama was very unstable and there were many claims to the throne. Raigama and Jaffna closely rivaled each other, but Kotte became less of a threat due to deprival of technology and trade.

The Kingdom of Raigama finally received stability in 1564 when King Samir I, a 32 year old of the Kshatriya caste declared himself as rightful ruler. Samir I's main focuses were to improve the military, infrastructure, and education system of Raigama, and improve relations with western powers. Samir once visited the Netherlands. Under Samir's reign temples, roads and other structures were built, some influenced by the Western Powers. He also made educational facilities more accessible all citizens and improved the literacy rate.

After multiple visits to the Netherlands, in 1581 King Samir signed the Treaty of Sri Jayawardenepura Kotte. This purpose of this treaty was to "Guarantee Raigama protection from other European powers, help with disease, and semi modernization in exchange, for use of manpower, resources, and the set up of Raigama becoming a protectorate of the Netherlands". Raigama would retain Kingdom status, but be a protectorate under the Dutch realm. This was the beginning of when the Netherlands became a major influence of Raigama. Over time the Dutch currency was adopted, and wealthier citizens and traders started speaking Dutch.

On January 11, 1581, King Samir I declared the First Raigaman Island War to press his claims to the rest of the island, in this war specifically Kotte. Kotte the isolationist nation had no allies, was quickly overwhelmed by the coalition of Urdustan and Raigaman forces supported by the Netherlands. By 1582, the forces led by King Samir had reached Kotte's capital, Kandy. The war ended when the former King of Kotte was forced to sign the Treaty of Kandy. The treaty stated that Kotte would become a vassal of Raigama, and would be renamed the Grand State of Kotte (For more information on the war visit First Raigaman Island War).

After exploring the region around India and Indochina, in 1584 the colony and trade post Nava Kotte was founded. Although administered by Raigama, Nava Kotte was also used by the Dutch for trade. It made it easier to trade with Dai Viet and the Dutch colonies in Indonesia. It was administered at first similar to a grand state. After the Raigaman Recession, the Treaty of Sri Jayawardenepura Kotte was amended and made it so the trade post was administered by a Dutch governor. This amendment also made it so the island would need to follow Dutch laws stricter.

In 1590, Raigama started to suffer from a major recession that lasted over forty years. The common theory for the recession is that it was caused by a combination of the rapid expansion of the navy, First Raigaman Island War, establishment of the new colony, and also the Dutch quota system. As the economy started to implode, many Dutch traders left Raigama as they saw their profits come to an end. The government suffered from a loss of most of their navy and retraction of their colony. As Kottans were effected by the recession as well, many nobles questioned Raigaman rule and tried many times, to petition to be a separate state under the Dutch. Many historians also theorized that the recession was the main cause of Samir I's depression.

King Samir I died on December 28, 1602 at age sixty-eight, due to old age and the questionable medical treatments of the time. A large ceremony took place in Sri Jayawardenepura Kotte where many mourned about the death of the king. His heir and many generals gave him the title, "Samir I the Great". Because of agnatic-cognatic inheritance, the next in line to the throne was his oldest son, Samir Venkata Navin Prabhat Akash (Samir II). Samir II received Dutch education, and had a slightly different approach to government. He wanted Raigama to be self-reliable, and not to further itself into the recession.

Although Samir II tried to improve the situation, most of his reign the country suffered from the recession. The recession ended up getting worse during his rule, and a black market rose, that the economy came to depend on. His reign was mostly eventless, and continued the Era of Recession.

The next to inherit the throne was Samir Venkata Jai Ranj Akash, more commonly known as Samir III. The beginning of his reign was characterized by the recession, but by the end of his life the nation had hit a golden age and was prosperous. He inherited the throne when he was sixteen years old, and was married to a princess of Delhi named Lakshmi. Samir III ended the Era of Recession, started the Late Samirian Era, and formed the Empire of Lanka.

The Lankan Golden Age, was the name given to the period of Samir III's reign after Jaffna was integrated into the realm, and the empire was created. After the young Samir had unified the island he felt that he accomplished his life goal, but still had many more ambitions. With the recession ending, the Empire was in a golden age back by trade and an improved economy. Samir had secured an alliance with Delhi, and made trade agreements with many European colonial powers. This drove the golden age further. With a surplus of money in the country's treasury, he built the Kust Weg, a road along the western coast of the island. After the road was complete, he started the most ambitious building project that had existed on the island. To improve trading and the standing of Lanka in the world, he started building one of the most grand capitals on the coast next to Sri Jaywardenepura Kotte. The city was to be named Waardige (OTL Colombo), Dutch for worthy, and a palace within the city called Prima. He knew the project would not finish in his own lifetime, but he hoped his envisioned capital would exist for his future descendants.

Around this time Lanka was also a major state of the Indian League alongside with its ally, Urdustan. Small private schools started to sprout up throughout the empire teaching western mathematics and astronomy. Dutch culture greatly influenced Lanka during this time period with wealthy Lankans even starting to wear Dutch clothes. An invasion of Nikobara occurred, but was indecisive and basically ended it a white peace.

The empire consists of the island of Lanka, its surrounding islands, and the smaller island of Nava Kotte. A small distance off of the Indian subcontinent, Lanka is separated by the Palkh Strait. The other island, Nava Kotte is located above Sumatra, and is the largest in the Nicobar Island group of India. Lanka consists mostly of flat to rolling coastal plains, with mountains rising only in the south-central part, and one hundred and three rivers. Nava Kotte is made up of several rivers and is largely covered by forest.

The Empire is a constitutional hereditary monarchy with a parliamentary democracy. The head of state is referred to as Emperor of Lanka. Due to the constitution, the monarch's powers are slightly limited.

The executive power of the empire is held by a group of ministers and secretaries, collectively called the Sahakaāraraad. The Sahakaāraraad consists of twelve to sixteen citizens chosen by the emperor. These officials assist the emperor in his decisions, and some have specific departments such as education. There are no terms for this office, and the emperor may choose to remove or install another official at will.

The Empire of Lanka is also divided into twelve administrative areas called provinces. Each province elects four members called Vahans, which will represent them in the Vatau-Paeādau (parliament). These Vahans basically control the legislative power of the empire. These representatives have the ability to draft and pass laws, along with the consent of the emperor. The Emperor can also pass edicts which override any laws passed by the parliament and can modify any law passed by the parliament.

For administrative purposes, Lanka is divided into twelve provinces. These provinces were established and most recently modified in the creation of the parliament in 1885.

The land forces of Lanka, called the Lankan Imperial Army, consists of about ninety-thousand men. In the event of a major defensive war, Lankan laws allow the force to become a conscription army, with all men between twenty-one and thirty-five being automatically drafted. Although the arsenal does not contain an adequate amount for such numbers, this would allow the maximum force of the empire to be an army of eight hundred thousand men.

The basic organizational unit of the army is called the Raejaimaenatauvae ("Raeja" for short), which is lead by a Raej. Raejas are grouped under four Kanadas, which are lead by the four Kanads. The commander-in-chief of the army is only the Emperor.

The arsenal of the army is fairly modern with firearms being supplied from both the Roman Empire and Imperial Japan. Some equipment is also bought from the Indian Empire. The army is one of the most up-to-date in Asia, but also remains one of the smallest.

During the 17th century, Lankan trade greatly increased due to new trade agreements with many nations. New agreements were established with Dacia, Croatia, Hispania, Damascan Sultanate, and the Suri Empire. These trades not only expanded the economy of Lanka, but some led to faster westernization. Agricultural products and specifically spices were the most frequents exports. The exports included, but are not only limited to Tea, Cinnamon, Opium, Rice, Sugarcane, Grain, Coconut, Milk, and Fish. With foreign trade, the Lankan government only imports a few supplies, most of them to do with the military. These imports include, but are not limited to muskets, gunpowder, cannons, and metal (for cannons).

The Empire of Lanka came to develop good relations in most of Asia and some parts of Europe. Lanka functioned as a Dutch protectorate and was also in the Indian League. Its main formal alliance were in Urdustan and Delhi, with a royal marriage to secure a tie to the Akash dynasty with Delhi. As part of the Indian League it developed many ties with other Indian nations as well. Informal allies of the nation and trade partners were Ayutthaya, Dai Viet, and Dacia. Although the empire tried to maintain good relations, it became weary of (pre-collapsed) Tibet, as they were threatening the Indian League. 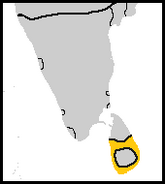 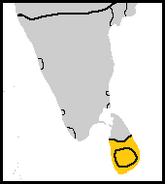 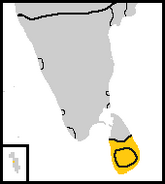 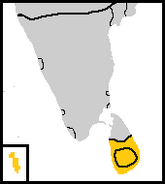 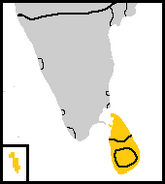 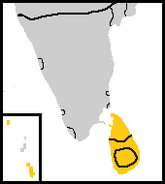