Liberia is a former country on the west coast of Africa. Following the aftermath of Doomsday, Liberia became embroiled in a decades long civil war that has continued to be fought in one form or another even today. Currently the most stable political unit in the former country is the Free Port of Monrovia.

The history of Liberia is unique among African nations, notably because of its relationship with the United States. It is one of the few countries in Africa, and the only country in West Africa, without roots in the European Scramble for Africa. Founded as a colony by the American Colonization Society in 1821-22, it was created as a place for slaves freed in the United States to emigrate to in Africa, on the premise they would have greater freedom and equality there.

Slaves freed from slave ships also were sent there instead of being repatriated to their countries of origin. These freed slaves formed an elite group in Liberian society, and, in 1847, they founded the Republic of Liberia, establishing a government modeled on that of the United States, naming Monrovia, their capital city, after James Monroe, the fifth president of the United States and a prominent supporter of the colonization.

A bloody military-led coup in 1980, led by Samuel Kanyon Doe, overthrew then-president William R. Tolbert, which marked the beginning of a period of instability for the country. Though the coup ended the 133 years of Americo-Liberian political domination over Liberia, his rule quickly became extremely corrupt and repressive.

On September 26, 1983, Doe was in New York City attending a session of the United Nations. Whether he survived the destruction of the city is unknown as he has been missing since that day. Nevertheless, the political and economic ramifications of Doomsday caused the Liberian economy to collapse. With the United States destroyed, Liberia had become completely cut off from foreign aid. The streets of Monrovia became a scene a vicious street fighting as nine different factions attempted to take control of the capital.

Thomas Quiwonkpa, Doe’s former second-in-command, was successful in seizing power and quickly executed his former opponents. Quiwonkpa was unable, however to prevent ethnic fighting from breaking out between the Gio (or Dan) and Mano tribes in the north with Doe's Krahn tribe in 1984. Violence among indigenous populations increased rapidly. The situation was further exasperated as refugees from the Ivory Coast began entering Liberia after their government collapsed in 1985.

By 1985, tribal infighting had escalated into all out civil war. On one side was the Krahn tribe allied with refugees from the Ivory Coast and other neighboring states. On the other was the Quiwonkpa led coalition of the Gio and Mano tribes which controlled Monrovia. Fighting lasted until 1990 until the Krahn, facing genocide, began abandoning Liberia, though pockets of resistance continued to harass the Liberian government.

Despite now controlling much of the country, Quiwonkpa was unable to keep the coalition he had created together. Yormie Johnson convinced the Gio tribe to leave Quiwonkpa's government. A new stage of the civil war began with the Gio tribe fighting the Mano tribe for control of the country. Remnants of the Krahn continued to fight both sides while more refugees entered Liberia, fleeing from the chaos that had engulfed Western Africa. Meanwhile thousands of civilians were being killed each year in Liberia.

In 1991, President Dr. Amos Sawyer, an Americo-Liberian, took control over Monrovia, with the help of a paramilitary police force called the "Black Berets," under Brownie Samukai. Sawyer declared Monrovia an independent city state called the Free Port of Monrovia. Americo-Liberians flock to the new state.

Thomas Quiwonkpa was killed in the coup ending the last remnant of an organized Liberian government. The rest of the country fell under the control of various warlord factions. Fighting continued through much of the 1990s, with the Mandigo tribe asserting its independence from in 1993 and a Krahn revival led by Roosevelt Johnson in 1994. Meanwhile Monrovia slowly pushed its borders outward.

Violence began to slow in the region as contact with the rest of the world grew. A small trickle of trade also benefited the region, especially the city-state of Monrovia. Signing the Safe Harbor Compact in 2003 they received financial aid and arms. Meanwhile, Commonwealth marines provided military training to Monrovian forces. Attempts, however, to negotiate a peace between the warring factions was a failure.

Nevertheless, fighting did begin to become less frequent as trade grew with the rest of the world. Liberian timber and diamonds became much in demand throughout the rest of the world as world trade picked up. Monrovia soon began acting as a neutral party between the remaining factions, allowing them a place not only to bring their trade goods, but also a good location to gather useful intelligence on each other. Though the war was now over for Monrovia, fighting continued across parts of the country.

In 2005, George Weah became President of Monrovia, beginning a new stage in Liberian politics. He petitioned the nations of the world to intervene in the Liberian conflict. The first body to offer aid was the fledgeling West African Union, though stretched thin by other operations in the region, a small joint force from Ghana, Ivory Coast, and Senegal arrived in late 2005. The force had some success as the local people were more welcoming of aid from other African nations. As operations in Guinea and Guinea-Bissau found more success, more troops were dedicated to the Liberian mission. Though many other nations showed signs of willingness to aid Weah, attempts by world nations to act in concert failed. It would not be until the creation of the League of Nations before any major peace-keeping mission to Liberia would be approved.

One of the first missions approved by the new League of Nations in 2008 involved Liberia. A speacial LoN envoy and staff would set up a mission in Monrovia to begin diplomatic talks between the different factions to end the war. The envoy also had authority to remind the different factions that the LoN was more than willing to put trade restrictions on all of Liberia if they showed any hesistancy about coming to the peace table. With Nigeria's operations in the region of former Cameroon finding success, troops were freed up for the West African Union mission to Liberia.

In July 19, 2009, peace talks officially began in Monrovia. As a sign of good will, the LoN authorized aid shipments to be distributed throughout Liberia due to the damages caused by a plague of caterpillars. The aid shipments were to be jointly guarded by LoN and WAU troops.

On November 3rd, 2009, an official peace agreement was signed between the warring factions of Liberia, ending the decades long civil war that had gripped the former country. All factions agree to drop any claims they have against the others and will begin to disarm their forces to an agreed upon level. Celebrations were held in Monrovia and other Liberian cities.

Liberia has a hot equatorial climate with most rainfall arriving in summer with harsh harmattan winds in the dry season. Liberia's populated Pepper Coast is composed of mostly mangrove forests while the sparsely populated inland is forested, later opening to a plateau of drier grasslands.

The following are a list of current Liberian successor states: 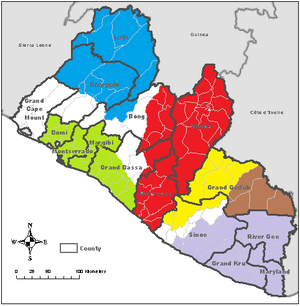 Retrieved from "https://althistory.fandom.com/wiki/Liberia_(1983:_Doomsday)?oldid=920931"
Community content is available under CC-BY-SA unless otherwise noted.