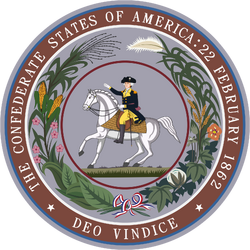 According to the Confederate States Constitution, The President is to be:

There are a few key differences between the Confederate President and the United States President:

Retrieved from "https://althistory.fandom.com/wiki/List_of_Presidents_of_the_Confederate_States_(Puget_Sound-1)?oldid=1637115"
Community content is available under CC-BY-SA unless otherwise noted.