Early in its history the Duchy of Livonia distinguished itself as a cultural and economic center, with many of its cities, such as Riga, becoming important trade cities. Livonia would be home to many important movements in the arts, as well as a successful commercial center, previously owning the Imperial Mint at Riga.

The region currently owned by the Duchy of Livonia was first settled many millennia ago by Aestii (or Balts), as the Roman scholar Tacitus would call them. The Aestii were a Balto-Finnic people who lived primarily in Estonia, Courland, and Livonia, but also spanned as far southwest as Danzig.

The Aestii then split off into two distinct groups - one that adopted the Slavo-Baltic languages and one that maintained the Balto-Finnic languages. The two would coexist in the Baltic region for quite some time in ancient history.

The largest Aestii settlement would form near the delta of the Daugava River, which was a principal connection between the coastal and inland peoples, and was known as the "route from the Vikings to the Greeks."

The Aestii practiced a complicated pagan religion that had some roots in Norse paganism, but had greater focus on spirits in everyday beings and celestial objects. These "heathen" customs, coupled with the desire of Christian expansion, led to eventual crusades that would change Baltic history forever...

Since the Balts were a pagan people living in Europe, in 1193, Pope Celestine III called a crusade for northern Europe. By the early 1200s, feudalism and religious furor spurred many Germans into the region to take up the papal orders to engage in a crusade, and the Northern Crusades began.

From 1198-1212, the Livonians were converted, and therefore Riga was founded in 1201 to serve as a base of crusading activities. Estonia would be subjugated by 1224, and Courland would eventually be fully Christianized by 1290.

The region now under the Duchy of Livonia then experienced subsequent oppression of local culture in favor of Christianization and Germanization.

Under Prussia, the region of Livonia modernized and managed to become on-par with the rest of Germany.

After Prussia sold their primary.

In 1602, the eldest son of Jaagup, the Count of Wenden (as the presumptive heir to the throne is called in Livonia) Maunas, married Kristina Szczuka of Poland-Lithuania, the second-in-line to the throne of Poland-Lithuania. Maunas' connection with Poland made Livonia much more profitable and set up for a dynastic union which came about with the death of King Casimir III in 16__. Count Maunas and Princess Kristina had a son in early 1610, named Nikolajs, who is positioned to inherit both realms at the death of his parents.

In 1610, Pskov declared war upon Livonia over colonial and economic disputes. The subsequent Livonian War, saw the emergence of Livonia as a regional power. First, Pskov failed to capture Narva after the siege was routed by Count Maunas Vaalgamaast. Peace banners were raised and an uneasy armistice was declared between Pskov and Livonia. Then, Prussia invaded Kuramo, but was defeated at the Battle of Skuodas (1611), and the Livonians saw this as "Pskovian treachery" and a breaking of  their truce, and prompted Count Maunas to recommence the assault on Pskov. However, this ended in an abject failure as the Pskovian armies had gotten into defensive positions during the armistice. The Livonian armies under Count Maunas were routed and the city of Narva promptly captured in the Second siege of Narva (1612). The subsequent retreat of Livonian forces provided the Pskovians and Prussians the chance they so desperately desired.

In 1613, both the Polish and the Spaniards had joined the war, and invaded from the sea, and aided in the blockade of Riga, which saw the stolen Pskovian technology of the Arsenal of Riga burned to the ground. by the end of the year, the Pskovians had besieged and captured Reval, Dorpat and Wended, while the Prussians, Poles and Spaniards had captured the south of the nation and were advancing on Riga, the last real stronghold of Duke Jaagup of Livonia. The Republics of Reval and Narva were declared by the Pskovian generals in charge of them. After a short siege by all allied forces, Duke Jaagup surrendered unconditionally.

The Treaty of Königsberg ended the war and established the Republic of Narva as an independent state (and a de facto vassal of Pskov), and as the General in charge of the occupation of Reval died form his old age, the territory was given to Prussia as the forces retreated. Poland was given the territories it occupied, and the territory Prussia held was reconstituted into a reduced Duchy of Livonia, under personal union with Prussia. However, disputes between the extent of the Republic of Narva's control extended until much later on.

The government of the Duchy of Livonia a feudal hereditary duchy that operates under the frameworks established by the Holy Roman Empire. The government is led by the Duke of Livonia, currently Jaagup I Vaalgamaast, who maintains fealty and vassalization contracts with his vassals.

The Duke is a de jure vassal of the Holy Roman Emperor, Wolfgang I von Habsburg.

Note: Italics represent an autonomous vassal that is not a de jure part of the Duchy of Livonia but ruled by a Count who swears vassalage to the Hercog.

The Duchy of Livonia is comprised of one archbishopric, one bishopric, four free cities, ten counties, and five margraviates.

All vassals are listed by type, and then clockwise from 12 o'clock.

There are two primary colonial regions of Livonia. The first is in the OTL Bahamas (ATL Seichtes Wasser or Vȯiti Vež [Shallow Water] Archipelago). The second is the OTL Leeward Islands (ATL Kōlaisa Jõugõisa [Sandy Islands]).

Here is a list of islands under the control of Livonian colonies, with OTL and ATL names, as well as the largest city (if applicable):

Livonia is home to four Free and Imperial Cities. These cities each claim a population of over 15,000 inhabitants.

The economy of Livonia is a combination of agricultural and trade-based economic functions. Although relying almost entirely on various primary sector fields for production, Livonia manages to be one of the fastest growing economies in both the Holy Roman Empire and Eastern Europe.

Production in Livonia is based mostly on utilization of natural resources...

Largely ocean based, with over 12,000 sq km of coastline in Livonia, Courland and Osel-Wiek.

The military of Livonia is the Livonian Maavägi,

The Livonian Navy, or NAME, is a moderate-sized and relatively advanced European-style navy. Drawing heavily from the latest of German, Scandinavian, and Pskovian naval techniques, the Livonian navy is one of the most adaptable fleets in the Baltic Sea.

The history of the Livonian Navy hails to pre-independence period. After the Kingdom of Prussia sold Danzig to Poland-Lithuania, the Prussian navy began to be centralized more and more in Riga, Reval, and Narva. These three ports became the first, second, and fourth largest ports in Prussia, respectively.

This led to a disproportionate amount of the Prussian navy being located in what would become Livonia. When Livonia broke free from the Kingdom of Prussia in 1584, it seized all of the Prussian navy that was stationed at Rigal, Reval and Narva. The shrewd negotiations of Duke Jaagup allowed half of the remaining Prussian navy to fall into Livonian hands. All told, the Livonian navy had NUMBER ships in 1600.

The culture of Livonia is predominantly based upon the Balto-Finnic tradition, but also comprises a unique blend of Finnic, Baltic, Slavic, and Germanic cultures.

There are three predominant, distinct cultural groups in Livonia. They are, in order of approximate population: Livonia (46%), Courlander (32%), and Estonian (22%).

Art in Livonia is largely religious, but also has some Renaissance elements (as a result of the proximity to Pskov)

While are in Livonia had been relatively silenced by Prussian authorities, there were a few notable Livonian artists who worked in Danzig (now Gdańsk) and Königsberg. After independence was attained in 1594, a number of ethnic Livonians studying around the world came to Riga to create their art. A few notable artists of the early 1600s include: 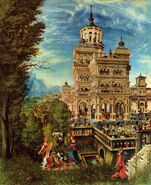 The architectural style of Livonia is primarily defined by early German building styles dating back to the 1200s and 1300s. This style, brought in by the Teutonic and Livonian Orders as well as the Danish crusaders, was used to construct the major cities of Riga, Wenden (Cēsis) and Reval.

This style, which started further south near Königsberg, was mixed with native architecture, which was relatively basic and was based on the ideas of function over form.

Cēsis Castle, one of many late Medieval Castles common to Livonia

Ibbi Kȯrand, "the Horse Palace" designed outside of Reval, by Aīvars Baltgālis
Add a photo to this gallery

The official language of Livonia, and the language in which almost all trade and all government actions take place in, is Livonian. Livonian, although technically a Finno-Urgic language, is very similar to Balto-Slavic languages, due to centuries of mingling of culture.

Livonian was always a relatively major language along the Livonian Coast, which encompasses the most populous region of Livonia. As the failed Prussian policy of Germanization began, Curonian and Livonian tended to grow closer in both vocabulary and grammar.

By the time of the fall of the Prussian rule of the northern Baltic, An ancient language...

Most similar to OTL Estonian

Religion plays a major role in the daily lives of most Livonians, the majority of whom call themselves Christian.

The predominant branch of Christianity in the Duchy of Livonia is the Western Church, led by the Archbishop of Riga.

The foreign relations of Livonia, while still being developed by the Duke and other officials, tend to be positive with a majority of nearby nations.

The first major nation to reach out to Livonia was, ironically, the Kingdom of Prussia from whom Livonia had split. This odd coincidence was because

Other nearby nations and there foreign relations are listed below.

An OOC list of things I want to accomplish.

Retrieved from "https://althistory.fandom.com/wiki/Livonia_(Principia_Moderni_III_Map_Game)?oldid=1704967"
Community content is available under CC-BY-SA unless otherwise noted.