"A revolution is a struggle to the death between the future and the past". 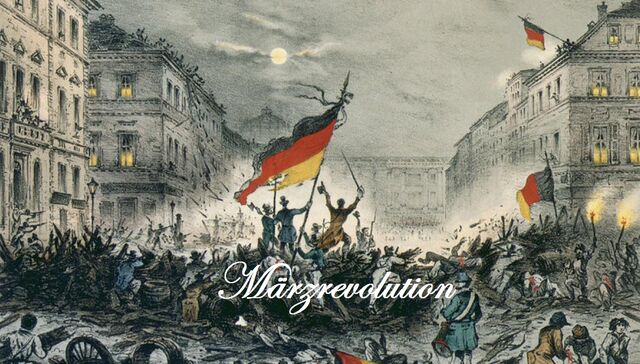 Märzrevolution (German for March Revolution) is based on the 1848 revolution in the German states. The pan-German revolutions expressed popular discontent with the autocratic political structure of the thirty-nine independent German speaking nations that formed the German Confederation.

In our timeline, the revolutionaries united to form a united German state, but they were divided. Some wanted a constitutional monarchy, with the King of Prussia as the Emperor of this German state, others wanted a French-style republic. The middle-class elements were committed to liberal ideals, while the working class sought radical improvements to their working and living conditions. The division within the revolutionary movement allowed the conservative aristocracy to suppress the rebellion.

What if the revolution had actually succeeded? In 1848, the middle and working classes all unite under one ambition; to establish a united socialist German republic. The city of Hannover is overrun by widespread protests that turn violent. King Ernest Augustus sends the army to suppress the rebellion, but the soldiers mutiny and join the revolution. Slowly, the revolution spreads across the German Confederation. The Prussian Army, however, remained loyal to their King, and suppressed the unrest within Prussia, but the Kingdom lost control over the Rhineland territories.

The Habsburg Empire begins to collapse, with Austria and Bohemia were annexed by the German revolutionary republic. The Habsburg family and the military flee to Hungary. Unrest in Hungary is suppressed by what remained of the military and Habsburg Hungarian loyalists. The successful revolution in Germany inspires revolutions in the Balkans and Russia.
Retrieved from "https://althistory.fandom.com/wiki/M%C3%A4rzrevolution?oldid=1638813"
Community content is available under CC-BY-SA unless otherwise noted.