The Manowans are a unique ethnic group of unknown origins native to the southwestern Amazon region. They consisted of a developed, independent kingdom between 700 BC and 1630 (spanning 2,330 years), formed after the unification of various tribes in the area.

Manowans were more advanced than most other pre-Columbian peoples: they developed naval knowledge, mastered a phonetic alphabet and crafted iron and bronze much before their first contact with Europeans. Their mathematics, base 10 like ours, knew the zero. Their language, Mannuwa, is mysteriously not related to any Native American language family, is a language isolate. While the origins of their civilization and their divergent technological development are now known, the origins of the people and the ethnic Manowans themselves are still one of the greatest mysteries of mankind, since their genetic connection is to Africans and not to Native Americans or Polynesians like the other peoples of the region.

Manowans call themselves man'uuwa'in, which in Mannuwa means "People of the Exile Land", a clear reference to the belief that they are "gods expelled from Heaven", as said by the Portuguese priest Fernando de Almeida. The Spaniards, the first European people with whom they made contact, named them manoas or manoanos.

Although the region they lived in was known by them as Al'tera (Mannuwa: Refuge of the Ancients), in opposition to the regions of the Andes, the Manowan Kingdom itself, as their state or country, was natively called Man'uuwa (Mannuwa: The Exile Land).

When used to describe the Manowan ethnic group, the term "Manowan" refers to a people of Southeastern Amazon which are different from the other pre-Columbian groups. The Incas and other Andean people used to call them "Ghosts of East", while the Mayas called them "The Jewel Eyed Ones". The term "Manowan" came from a Brazilian spelling of the Spanish term "manoano", which came from Mannuwa language (also called Manowan) "man'uuwa'in", the endonym term for the natives themselves.

Manowans are not related to any other ethnic groups of the Americas. Their genetic origins are traced to old Africa, when the human race had not left the continent yet. Some researchers led to the conclusion that they are probably the oldest surviving known ethnic group, the first to separate from the earliest branches of Homo sapiens sapiens. They probably have lived relatively isolated for thousands of years before reaching the Amazon, hence their unique phenotype.

The Brazilian singer born in Niss, Lara Nissi, is the most famous example of pure Manowan phenotype. Other famous examples of people with Manowan phenotypical traits are the surfer Rafael Valois (a White with purple eyes); the rapper Carol Souza (a Black with white hair); the governor of Paraná province, Murilo Arantes de Paula (a White with purple eyes and silver hair); and the noble members of the House Miranor.

The Manowans are one of, if not the most, phenotypically unique peoples in the world. Colonial records and folklore from other Amerindian peoples confirm it; they were known for their unique ethnic traits: olive to light brown skin, purple eyes and natural white, silver gray or platinum blonde straight hair (most of Manowans have darker, even brown, eyebrows and beards, though). As to their eyes and hair color, these are phenotypes unique to them. The genes which allow those features are mostly dominant and remained in much people of Manowan descent even after the centuries of miscegenation. Due to that, it is not uncommon to find in Brazil, mainly in the province of Manowan, people with, for example, white skin, but natural silver or white hair, or with purple eyes. Hence, many Manowan-descent people have one or more of the Manowan phenotype hidden by miscigenation.

With miscegenation and the so-called "Manowan Diaspora", after the War of Supremacy, the Manowan people expanded throughout Brazil. At 2015, approximately 11% of the Brazilian population (18,810,000) had some Manowan ancestry and 8.7% (14,877,000) had one or both of the dominant Manowan phenotypical traits (purple eyes and white/silver hair) or pure Manowan phenotype. Also, it is expected that approximately 1,020,000 people worldwide (outside Brazil) have some Manowan ancestry (due to the Brazilian colonial expansion and travels), such as the French actress Clarisse Dumont and the Malagasy ex-Prime Minister Manoel Vila.

The "Manowans", as a sole ethnic group, were largely destroyed by colonization and the War of Supremacy. The survivors that lived in the colony such generally intermingled with the settler so much that they ceased to exist as a distinct group. A few Manowan aristocratic families are famous for maintaining pure Manowan lineages - those with "the blood of Old Manowan" retain strong Manowan features of pale hair and purple irises. However, there are regions in which the Manowan heritage are still strong enough so large segments of the population can still exhibit classic Manowan features, like the towns of Saint Claire, Carlota and Vila Rosa in Manowan, and Ribeira Alta in São Paulo.

Genetic experiences prove that Manowans have no relation with Polynesian, European or Asian ethnicities, except for a few of Phoenician ancestry. They share a large bunch of genes with Africans and probably came from there. However, some studies indicate that the Manowans may be older as a ethnicity than even the oldest African ones, which reinforce the Theory of the Manowan Eve. These theory postulates that the Manowans may be the oldest known human ethnic group and that they may have arrived in Africa and migrated to America somehow.

That lack of information about the Manowans origins, plus their beliefs about being descendants from powerful gods who had their land destroyed and sunk at sea, allowed many people to speculate that they might be the legendary Atlantis or, at least, the empire which inspired the legend.

The most notable remnant of the ancient Manowan nobility, the House Miranor, noble house of the Duke of Niss, is descendant of the ancient Manowan kings. During the War of Supremacy, the youngest of the Manowan king's sons, Mir'anor, shifted side to the Portuguese, bringing with him many Manowans, and received, in exchange, the title of Duke of Niss. Mir'anor have always been fascinated with the Europeans and took a Brazilian woman of European-descent, Cecília Maria de Melo, as his wife. Their life and love for each other is more in the field of folklore than history, but it is known that their firstborn son was named Emílio Miranor, giving birth to that noble house. For centuries, the Miranors have exhibited their Manowan status with pride, even if they were underseen by most of the other Brazilian noble houses. By the end of the 19th century, their investments in the rubber boom and, after, in other activities made them one of the richest Brazilian noble houses. During the reign of Queen Helena, her second-born child, Princess Mariana of Bragança, married Tobias Miranor, heir of the Duke of Niss, founding the Miranor-Bragança branch of the House of Bragança. Of their children, Princess Amara and Prince Lir, the latter is the only one who inherited his father's true purple eyes.

Examples of people of Manowan descent: 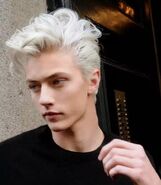 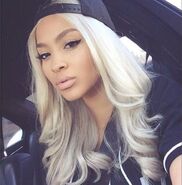 Prince Lir of Miranor-Bragança, tenth in the line of succession to the Brazilian throne.

As already said, the origins of the Manowan people are unknown. Their language, Mannuwa, is considered a language isolate among Native American languages and genetic studies have also shown that ethnic relationship between Manowans and other pre-Columbian peoples are almost nonexistent. The only sources as their origin is their own myths.

According to their mythology, the Manowans descended from ancient gods, called Lian'ti or Lian'di (Mannuwa, The Ancient Gods, or The Ancestor Gods) who used to live in a idilic place called Alta'lian'te or Alta'lian'ti (Mannuwa, Fortress of the Ancients or Fortress of the Gods). Those gods were powerful and ruled over the Earth and the great waters (the sea), but the envy of other gods, called Kori'an'di (Mannuwa, Dark Gods of the Void), led to a war that ousted the Lianti of their power and sank their kingdom into the oceans. The majority of the Lianti survivors, stripped of their godhood and transformed into mortals, were guided by the Lianti who remained gods (only the royal family of Altaliante) to a rainy and warm land and divided into 14 tribes. The remaining Lianti gods, now based on the heavenly fortress of Avan'si or Avansi (Mannuwa, Eternal Watch), achieved continuously to protect their mortal people from the Koriandi. Since then, the Lianti and the Manowans live in a symbiotic relationship: the Manowans' worship and veneration feed the Lianti powers and allow them to fight against the Koriandi for their own lives and the Manowan's.

The historical origins of this myth are still unknown, but it is known that the Manowans were actually divided into 14 tribes to the period between 900 and 850 BC (some historians even put that period as far as 8000 BC), when the Manowan people unified under a confederation, in order to protect themselves from other Native Brazilian peoples, by whom they were despised for their different ethnicity, despite of their technological advantages.

The Manowans in Colonial Brazil

The Manowan People in Independent Brazil

The Manowan language, Mannuwa or Man'nuwa (the Exile Tongue) is a language isolate, the only member of the Manowan family, and co-official language of the Manowan province. Alongside Quíchua, Mannuwa is one of the most widely spoken indigenous languages in Brazil. Since 1871, it has been regulated by the Mal'adranit'Man'nuwa'Vira'dian (the Institute of the Mannuwa Language). It has its own alphabet, the Manowan Alphabet, a phonetic alphabet that was created based on early Manowan ideograms (the knowledge of this older writing system had been already lost almost completely by 900 BC), but can be written using Latin alphabet as well.

Mannuwa is an extremely versatile language, the usage of prefixes and suffixes to give new meaning to base-line small words as well as merging two or more words, is widespread as, i.e., in words like Eliandor (E'lian'dor: E, prefix to child/children, Lian, from Lianti or the gods, and Dor, city or fortress; City of the Gods' Children), Miranor (Mir'anor: Mir, gift, and Anor, mid-day sun; gift given by the mid-day sun), Manuuwa (Man'uuwa: Man, exile, and Uuwa, land; land of exile) and Mannuwa (Man'nuwa: Man, exile, and Nuwa, tongue; The exile tongue).

In Mannuwa, there are no spaces between different words, but an apostrophe like sign (') which is also put in the words to separate their one or many base-words and the prefixes and suffixes. One is able to know when the apostrophe (as it is used when writing Mannuwa with Latin alphabet) is separating words or only defining their subdivisions because all entire words in Mannuwa are written with the first letter capitalized (when using the Latin alphabet, when using the Manowan alphabet, a macron-like sign,¯, is added to the first letter). See below an example of Manowan language in Latin alphabet:

As can be seen, the Mannuwa word order is usually Object-Subject-Verb. Next table shows the Manowan words following the English word order.

The Manowan culture is considered a part integrate of the wider Brazilian culture. Since the War of Supremacy the Manowans have influenced the colonial society in Brazil with their culture, language and customs.

Retrieved from "https://althistory.fandom.com/wiki/Manowan_Kingdom_(Parallel_Brazil)?oldid=1637118"
Community content is available under CC-BY-SA unless otherwise noted.