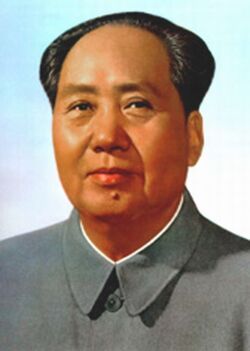 Mao Zedong (Chinese: 毛泽东), also known as Mao Tse-tung and commonly referred to as Chairman Mao, was a Chinese Communist Revolutionary and the founder of the People's Republic of China, in which he governed from the Chairman of the Communist Party of China in 1949 until his death. His Marxist-Leninist theories, military strategies and political policies are collectively known as Maoism.

Alternate versions of Mao can be seen in:

This is a disambiguation page, a list of pages that otherwise might share the same title. If an article link referred you to this title, you might want to go back and fix it to point directly to the intended page.

Very probably it refers to an entity that appears on several timelines.

If you have such an entity in your TL, add it to the list.

Retrieved from "https://althistory.fandom.com/wiki/Mao_Zedong?oldid=902308"
Community content is available under CC-BY-SA unless otherwise noted.