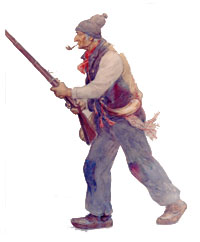 In 1837, politicians in Upper & Lower Canada voiced their complaints against a colonial government they saw as undemocratic contrary to their interests as free British subjects. When the list of reforms they drew was rejected by the British government, they and their followers rose in an event that came to be known as the Canadian Revolution.

The rebels faced many setbacks but eventualy prevailed leading to a reordering of power in North-America and the British Empire as a whole.