Alliances in 1915. Alliance-Orange, Entente-Green
Add a photo to this gallery

The World in 1938, at the outbreak of World War II.
Add a photo to this gallery

The World in 1988, right after the Kashmir Invasion War, and following the collapse of the People's Republic of Spain and Chiangist China.

The World in 2001, after the collapse of the Soviet Confederation. 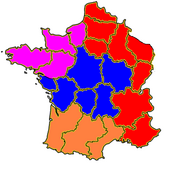 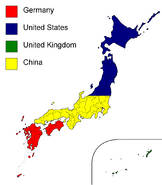 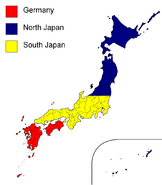 Japan in 1954, just before the Japanese War. Republic of (North) Japan-blue, backed by USA and allies, (South) Japanese State-yellow, backed by China. 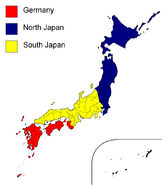 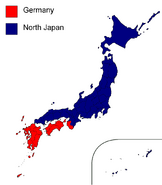 Japanese Reunification (1988), after the fall of Chiangist China. 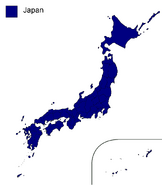 Japan in 1997, after the return of Shikoku, Kyushu, and German Honshu by Germany.
Add a photo to this gallery
Retrieved from "https://althistory.fandom.com/wiki/Maps_(Anglo-German_Alliance)?oldid=751942"
Community content is available under CC-BY-SA unless otherwise noted.