Since all sites on the map of the Antarctica region are "north" of points closer to the South Pole, and conversely all of the rest of the world is "north" no matter where one happens to be on the continent, a new convention has been devised for the map of the "bottom of the world." The map has been oriented in such a way that the point at 0.00° latitude (φ) and 0.00° longitude (λ) (on the equator and the meridian) will be due north. Subsequently, the point of 0.00° φ and 180.00° λ will be due south. The point on the equator at 90.00° W is due "west" and the corresponding point at 90.00° E is due "east."

Another way of looking at it is to look to the oceans. The south Atlantic is to the North (South America being in the northwest and Africa in the northeast), the Indian Ocean is in the East, and the Pacific fills the western (Galapagos Islands) and southern (most of Oceania, including New Zealand). In the Northern hemisphere, England is North and America is West, while India is East. In short, though, it is best to have a map of Antarctica oriented as above available when referring to points on the continent. 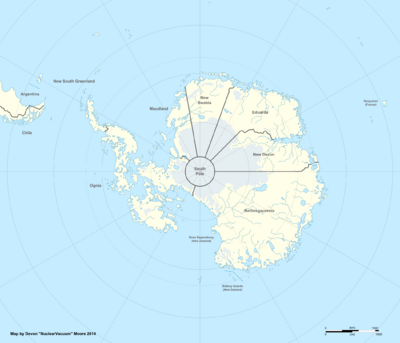 Atlas of Antarctica
Add a photo to this gallery

South Pole
Add a photo to this gallery

Official Languages
Add a photo to this gallery
Retrieved from "https://althistory.fandom.com/wiki/Maps_(Great_White_South)?oldid=1019026"
Community content is available under CC-BY-SA unless otherwise noted.