The Mediterranean War began on October 16th, 1943 with the joint declaration of war by both the Turks and Italians.

The first shots of the war were fired within hours of the Turk-Italo declaration of war by Turkish 4th Marines unit with their landing on several Greek Islands in the Aegean Sea. Most of the islands fell quickly to the Turkish onslaught except for Crete, which had been fortified in the past few years in case the Axis attacked.

A few hours after the Turks began taking the Aegean by storm, the Italians invaded - landing by Corinth and invading from Albania, opening up two new fronts for the Greeks to defend alone.

The main battles of the war are most commonly agreed to be the Battles of Patras and Crete, both of which resulted in heavy casualties for both sides and were vital to the Greek state.

The Battle of Patras occurred on November 3rd, 1943 with the launching of an attack by the Italian forces near 2 in the morning. The battle lasted for nine hours, costing thousands of lives and forcing the Greeks out of western Greece.

The Battle of Crete occurred from March 22nd to April 30th, 1944, resulting in the bloodiest battle in Mediterranean history up to the time. It resulted in over 124,000 dead or wounded and many more forced from their homes. The taking of Crete granted the Axis full control of the eastern Mediterranean and forced the Greek Navy from the sea.

The Final Stand of Greece

By June 7th, 1944, the Greeks had been defeated on every front and been forced to there ancient capitol of Athens, which by that point in the war had been bombed to rumble, with the sacred temples of ancient Greece spared by Italian bombers only at their commanders orders.

The Battle began near 9 in the morning when the Italian and Turkish forces launched one final offensive, hoping to knock the Greek Army out of the war for good, but as the battle raged it seemed as if every Athenian and Greek citizen had joined the Greek Armies ranks, flushing it with more than a hundred thousand extra troops, which allowed the Greeks to inflict massive casualties against the enemy, and by the days end, it seemed as if the aggressors had been defeated.

Sadly however for the Greeks, Germany's Expeditionary Force arrived at the seen of the battle just after darkness had come, and the Greeks, not knowing of this, attempted to launch an offensive the next day, only to have it stopped abruptly by German machine guns. This forced a retreat back into the city, which was then attacked viciously by the new German commanders, until finally the next day, on June 10th, 1944, the city fell, forcing the Greek surrender to the Axis.

Following the Battle of Athens, the entire Greek nation was left to the Axis Powers. Germany quickly made it known it wanted no land, although it would have a military base on Crete.

This left the rest of Greece to Italy and Turkey, which agreed to divide the country along east and west lines, giving Turkey all the Aegean Islands and most of its coast as well as parts of the Greek Peninsula. The rest was ceded to Italy including Crete, with the new lands in mainland Greece being turned into a puppet state while Crete is directly annexed. 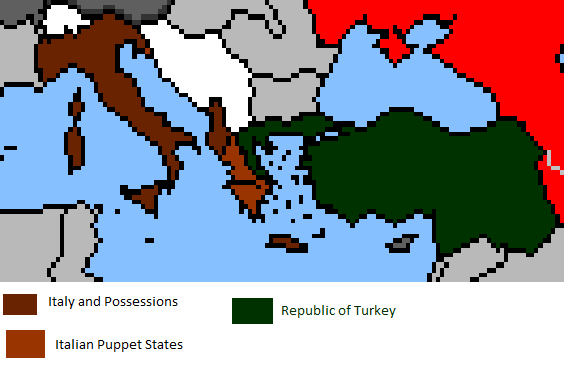