Misuri was originally part of the Japanese Luijian-dô. Most of the modern territory of Misuri was known as the Province of Misuri, while Arukansa and the cities of Kansagawa and Misurigawa were part of the Province of Arukansa (the rest of it is part of modern-day Arkansas. Luijian-dô was divided between France and Britain after the First Global War, with modern-day Misuri going to France.

In 1771, the Misurians rebelled against French rule. They were granted independence in 1774, and subsequently joined the Federation of Japanese States.

Misuri is divided into ten provinces and six autonomous regions. The autonomous regions possess almost total independence from the central government in all but external matters. The only constraints on their internal administration is the Guarantee of Rights which forms part of the Misuri constitution.

The provinces, on the other hand, enjoy far less autonomy. Outside of the autonomous regions, Misuri is a unitary state, with the provinces possessing only minor powers, subject to the central government. 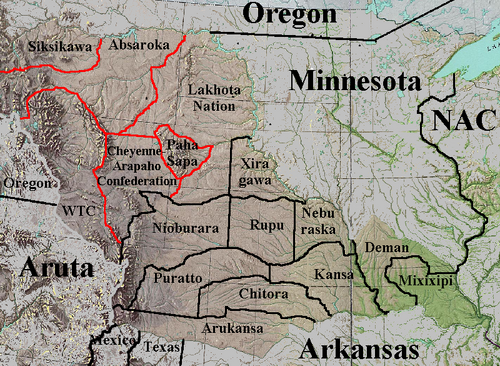 After the Third Global War, Misuri gained territory from the North American Confederation and Texas. In the new territory, several new provinces were established

From the North American Confederation