This alternate history related article is a stub. Please add suggestions on the talk page.

Modern Renaissance, in its broadest definition, is modern thought, character, or practice. More specifically, the term describes both a set of cultural tendencies and an array of associated cultural movements, originally arising from wide-scale and far-reaching changes to Western and Eastern societies in the 1950's/1960's, and again in the 2000's and until today. The term encompasses the activities and output of those who felt the "traditional" forms of art, architecture, literature, religious faith, social organization and daily life were becoming outdated in the new economic, social and political conditions of an emerging fully industrialized world. The today form appeared in Europe in the 1970's after the brutal fascist governments start to end.

During this period, many things changed. Cities came to be more organized. More work went into designing things. Artwork, architecture, and landscaping regained their high status of the mid-20th century. Car culture returned in most wealthy and western countries, and public transit also returned. Nature came to be protected more strictly. Crime rates started to fall across the board. Plastic fascination returned. Co-operation between countries grew. And Japan's after Hirohito's death start to turn more neutral and abandoning the Cold War...

The modern fashion has appear in the start of the 2000's and strangely it's very similar to the one used in the 1960's.

The mini-skirt dresses, and the French manicure with false eyelashes, and the pillbox hat, are extremely popular in the Renaissance. Blues, greens, and shimmery eye shadows are popular; false eyelashes are used, and hairstyles have a variety of lengths and styles. While focusing on colours and tones, accessories are less of an importance during the Renaissance. People are dressing in psychedelic prints, highlighter colours, and mismatched patterns.

Women's hair styles range from beehive hairdos to the very short styles similar to the ones popularized by Twiggy in the 1960's. Between these extremes, OTL men's haircut remains similar. The pillbox hat is extremely fashionable.

The '60s also gave birth to the skinny jean, (slim-fit pants), worn by Audrey Hepburn, which is again popular with young women today..... in OTL and in TTL....

Young Woman in Bikini in Florida

Women at the Singapore zoo. Note her Pucci-style priny dress

A woman in a "space suit", a one piece clothe. Note her fuchsia colored lips.

Note the beautiful jewels, jewels are one of the fews accessories used in the Renaissance.
Add a photo to this gallery

Futurist architecture (or Futurism) began as an early-20th century form of architecture characterized by anti-historicism and long horizontal lines suggesting speed, motion and urgency. Technology and even violence were among the themes of the Futurists. The movement was founded by the poet Filippo Tommaso Marinetti, who produced its first manifesto, the Manifesto of Futurism in 1909. The movement attracted not only poets, musicians, and artists (such as Umberto Boccioni, Giacomo Balla, Fortunato Depero, and Enrico Prampolini) but also a number of architects. The latter group included Antonio Sant'Elia, who, though he built little, translated the Futurist vision into bold urban form. In the post-World War II era, futurism, toned down considerably, redefined itself in the context of Space Age trends, the car culture and a fascination with plastic. An example of this type of futurism is Googie architecture of 1950s California. Futurism is not a style but an open approach to architecture, so it has been reinterpreted by different generations of architects across several decades, but is usually marked by striking shapes, dynamic lines, strong contrasts and use of advanced materials. All this has revive with the Renaissance, specially the fascination with plastic and the Space Age trends.

Googie architecture (also known as populuxe or Doo-Wop) is a form of modern architecture and a subdivision of futurist architecture, influenced by car culture and the Space and Atomic Ages. Originating in Sou

thern California during the late 1940s and continuing approximately into the mid-1960s, the types of buildings that were most frequently designed in a Googie style were motels, coffee houses and bowling alleys. The school later became widely-known as part of the Mid-Century modern style, and some of those more notable variations represent elements of the populuxe aesthetic, as in Eero Saarinen's TWA Flight Center. This type of architecture has returned with the Renaissance. 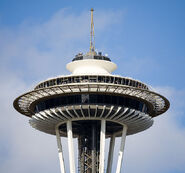 The Space Needle at Seattle 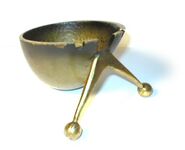 Mid-Century modern is an architectural, interior and product design form that generally describes mid-20th century developments in modern design, architecture, and urban development from roughly 1933 to 1965 and again between 1989-today. The term was coined in 1983 by Cara Greenberg for the title of her ground-breaking book, Mid-Century Modern: Furniture of the 1950s (Random House), celebrating the style which is now recognized by scholars and museums worldwide as a significant design movement.

Tamanaco Hotel in Caracas
Add a photo to this gallery

Modern architecture is characterized by simplification of form and creation of ornament from the structure and theme of the building. The first variants were conceived early in the 20th century. Modern architecture was adopted by many influential architects and architectural educators, however very few "Modern buildings" were built in the first half of the century. It gained popularity after the Second World War and became the dominant architectural style for institutional and corporate buildings for three decades, covering practically most of the Cold War  era.

The exact characteristics and origins of Modern architecture are still open to interpretation and debate. 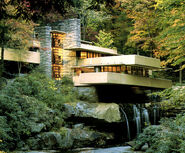 Villa Savoye by Le Corbusier
Add a photo to this gallery

Usonia (pronounced /juːˈsoʊniə/) is a word used by American architect Frank Lloyd Wright to refer to his vision for the landscape of the United States,

including the planning of cities and the architecture of buildings. Wright proposed the use of the adjective Usonian in place of American to describe the particular New World character of the American landscape as distinct and free of previous architectural conventions.

Usonian has occasionally been used in the sense of "U.S. citizen".

Art Deco is an eclectic artistic and design style which had its origins in Paris in the first decades of the 20th century. Nowadays the style is said to have been active from around 1910 until the outbreak of World War II. The style was named in the 1960s after the 1925 Exposition Internationale des Arts Décoratifs et Industriels Modernes that was the culmination of high-end style moderne in Paris. Led by the best designers in thedecorative arts such as fashion, and interior design, Art Deco affected all areas of design throughout the 1920s and 30s, including architecture and industrial design, as well as the visual arts such as painting, the graphic arts and film. At the time, this style was seen as elegant, glamorous, functional and modern. This movement has returned again with the Renaissance.

Most tourism ads photos are in a vintage style, and many are fanciful painted.

Add a photo to this gallery
Retrieved from "https://althistory.fandom.com/wiki/Modern_Renaissance_(Central_World)?oldid=889700"
Community content is available under CC-BY-SA unless otherwise noted.