The head of state is Bishop Karl von Fürstenberg.

The currency is the Westphalian Crown (WFC).

A 'glorious and awful anachronism' the Bishopric of Münster-Westphalia was formed during the 15th and 16th centuries by various bishops who slowly brought more cities and territories under their rule through bullying, bribery and fears of a Lutheran take-over. This was countered by a long struggle by the city of Münster itself to assert its independence.

The bishops came under considerable pressure as the reformation claimed more and more of the North German population. By the 1530s the majority of the city councils were Lutheran while the bishop and the nobility clung to Catholicism. Careful to keep the bishopric out of the religious peasant wars of the previous decade Bishop Julius von Dhaun simultaneously represented much of what the reformers wished to rid the church of; elevated to power through wealth rather than devotion, pluralist, secretly married and selling indulgences rather than promoting faith were amongst the not-untrue accusations levelled at him. Once he had paid back his creditors for buying the bishopric however he kept taxes low, keeping the Lutheran merchants on side. 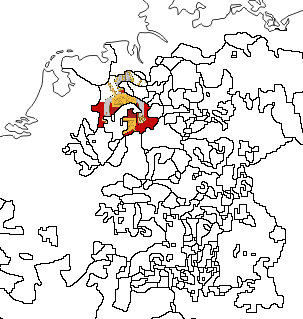 The conversion of many Münster citizens to Anabaptism threatened to upset the careful balance and a convergence of Anabaptist preachers in 1534 incited the populace to throw out both the council and the bishop, proclaiming a Baptist kingdom in the city. The right to recapture the city was closely fought over by the Schmalkaldic League and Philip of Hesse, also Lutheran but aligned to the Emperor. The city was eventually recaptured and the heretical leadership executed by the Schmalkaldic Counts of Lingen and Oldenburg after 18 months of chaotic rule and a brutal siege.

The Schmalkaldic League then denied Dhaun his throne, instituting a Lutheran bishop, Christoph Crispinus, in his stead which sped the reformation through Westphalia. This led to the decade long Münster war, ironically between two Lutheran camps for the future of the city. This then bled into the 1st Schmalkaldic War which would result in the division of Germany. Münster was then largely secularised, Crispinus divided a large portion between his sons then sold much of the rest to various lords and allowed the cities to effective buy their independence. However, the Schmalkaldic War(s) had emptied many lords' coffers and the new land owners, including other episcopal sees, became indebted to the bishop, especially during the Fifty Years War which ravaged the bishopric. This served to keep the disparate lands in 'a union of debt'.

Shortsightedness and profiteering in the early 1800s led the Münster weavers to drive the inventor John Lewe and his 'Spinning Jenny' out of the city. The revolution in textile production would take place in Denmark rather than Germany as a result. However the size and odd shape of the Bishopric has allowed it to become a leader in canal and railway building as the merchants demanded more and more control over the booming trade crossing its territory.

Resisting repeated attempts at reform the bishopric and all its dependent territories were eventually transferred over to a civilian government in 1832 which ensured unity. That it has not abandoned its ecclesiastical title completely is due more to rivalry between branches of the Crispinus family than any loyalty to faith. The Episcopal diocese has no issues with turning the territory into a fully secular state and is broadly in agreement with various attempts to secularise the remaining Imperial ecclesiastical states. However it, and the Imperial Diet, has no wish to see the state disintegrate. The three Crispinus family branches are locked into a legal battle over seniority (i.e. who would 'inherit' should it go over to a monarchy). Meanwhile the city councils are willing to cede away if they cannot get a republican system in place. In view of this, the status quo has long been grudgingly accepted as the best option by the population.

The Bishopric is governed by a single chamber Diet with elections occurring every five years. The head of state is still the Prince-Bishop of Münster, currently Karl von Fürstenberg, though he has little temporal power and in practice neither the Bishop or the episcopal council interfere in the workings of government.

In fact the civilian government is generally quite liberal, perhaps best represented by Emma Waldeck, currently the only female chancellor in Germany.

Retrieved from "https://althistory.fandom.com/wiki/Munster-Westphalia_(The_Kalmar_Union)?oldid=951075"
Community content is available under CC-BY-SA unless otherwise noted.