First European settlement of the territory of New Albion began with the establishment of the Ericson Bay Company. From 1670 until the partition of the Ericson Bay Territory in 1824 European settlement consisted mostly of fur traders and trading post staff, with the exception of York Factory, which saw the settlement of a terraforming team to ensure the surrounding land was able to be cultivated to support the population. This mostly consisted of the establishment of heating grids in order to keep air and ground temperature at a level allowing farming.

The Colossal Maple became the staple product for the Ostermann territory. The enormous trees provided both a hard, buoyant wood that was invaluable in shipmaking, boiling the sap produced a syrup sweetener similar to that produced from the sugar maples of Vinland, though a single tree could produce the same sap quantity of 10 sugar maples. With the Colossal Maples and vast supplies of fir and cedar, the Northwest Company rather than shipping all its lumber to Britain for processing, decided to develop the area for shipbuilding. By 1688, Jamestown's population had reached nearly 8,000 inhabitants and was the second largest settlement on the west coast of Vinlandia behind the Hanseatic settlement of Neu Hamburg.

Growth and the United Empire Loyalists

In 1697 Duncan O'Rourke, an Irish captain under the employ of the Northwest Company began a more in depth exploration of the northwest coast, exploring further down the Ostermann Strait and establishing a trading post at Fort Hibernia on the southern tip of a large island he named New Eire. He charted what would become known as the O'Rourke Channel. He sailed further north coming across an island chain he named the St Patrick Islands in honor of the feast of St. Patrick, the day the islands were discovered. There he met with the locals who identified themselves as the Haida. During his second voyage along the pacific coast he intended to return to the islands, but his ship was never heard from again.

In 1748 newly crowned King Alwyn I began consolidating control of the colonies, taking crown control of several colonial companies in the east. The Northwest Company's Ostermann territory was transfered to crown control in 1749, though colonial governors tended to be chosen from Northwest Company officials, keeping the colonies in company control. In 1752, New Eire was transfered to crown control as well, and its first colonial governor Edward Cornwallis took office in 1753. Cornwallis brought with him some 1300 families to settle what he considered a "Gentlemen's settlement" to replace Fort O'Rourke as the capital of New Eire, establishing Halifax on the east coast of the island.

Following the victory of the Vinlandian Commonwealth in 1779 a mass migration of loyalist colonists fled the former British colonies to other territories of the empire such as the Bahamas. The territory claimed by the British that held the most promise for these settlers though were the northwest colonies in Ostermann and New Eire. Over the course of several years around 45,000 of these settlers arrived in the colonies swelling the populations of Fort O'Rourke, Johnstown, and Fort Henry as well as founding new settlements such as Llywellyn near the O'Rourke River as well as several new settlements throughout London Sound and the east coast of New Eire.

Conflict with the Haida

In 1783 it was discovered what had happened to Duncan O'Rourke 80 years before. His arrival in the St Patrick Islands had brought disease on such a scale that the medicine men of the tribes had difficulty using their magic to deal with it leading to thousands of dead. They vowed to bring vengeance upon the white men but knew their technology was too great. On O'Rourke's return in 1702 the Haida had captured him and his crew and enslaved them, forcing them to teach them as much about their technology and shipbuilding as they could. The Haida had used this knowlege and united the surrounding tribes on the mainland through conquest and the stories of the great death the white people had brought. They began mining the mainland for metals to attempt to recreate the cannons they had captured from the whites and began raiding down the pacific coast.

At the height of the conflict the Haida made a raid on Halifax, setting fire to the settlement and killing Governor Mark Milbanke. The British then launched a fleet to eliminate the Haida threat, resulting in the Battle of the St Patrick Coast, in which the Haida fleet was wiped out, but the British lost all but 2 of the 14 ships sent. These events caused the British leadership to take the Haida seriously as a nation, and instead of simply wiping them out, entered into talks with the Haida leadership. This lead to the Treaty of St. Catherine, named for the ship on which the treaty was signed, in which Haida sovereignty over the St. Patrick Islands, as well as their territory on the mainland coast was recognized. Settlement of Haida territory was prohibited without permission of Haida leadership.

Kingdom of New Albion and the Three Point Railway

In 1839 due to mounting pressure from colonial administrators it was decided to grant the colonies of British North America self government, and the colonies of New Eire, Ostermann, New Caledonia, and Superior were to enter into a Confederation. With Superior and New Caledonia separated from the other colonies by so much distance, these provinces initially declined the offer, wishing to stay crown colonies of the British Empire. Only when the others offered to connect Port Arthur and Two Rivers with a railroad did the others reluctantly agree to confederation.

During construction of the railroad west from Port Arthur, construction crews came into contact with several settlers from Charlesiane heading north. Once word of French settlers on British lands reached government officials in Port Arthur, as well as word of railroad construction across lands Charlesiane considered its own reached ears there this sparked the Blackfoot Crisis. Both Charlesiane and the newly formed government of New Albion claimed the territory known as Blackfoot Territory in Britain and Gros Ventre Territory in France. The Charlesiane government threatened war with New Albion if they didn't agree to a border on the 48th parallel while New Albion claimed as far south as the 43rd. While each government had the backing of their parent nations, France rather than risk political conflict with Britain, with which they had recently entered into a lucrative trade agreement in India, instead issued the 1841 Charlesiane Proclamation which granted control of its foreign affairs to the Grand Duke and Parliament of Charlesiane. This left Charlesiane with little foreign backing for its claims while New Albion still had Britain. Rather than backing down entirely Charlesiane offered the 45th parallel as the border for the remainder of unclaimed land between the two. Britain pressured New Albion to agree and the border remains to this day.

The government of New Albion is a constitutional monarchy with the monarch shared with that of the United Kingdoms. 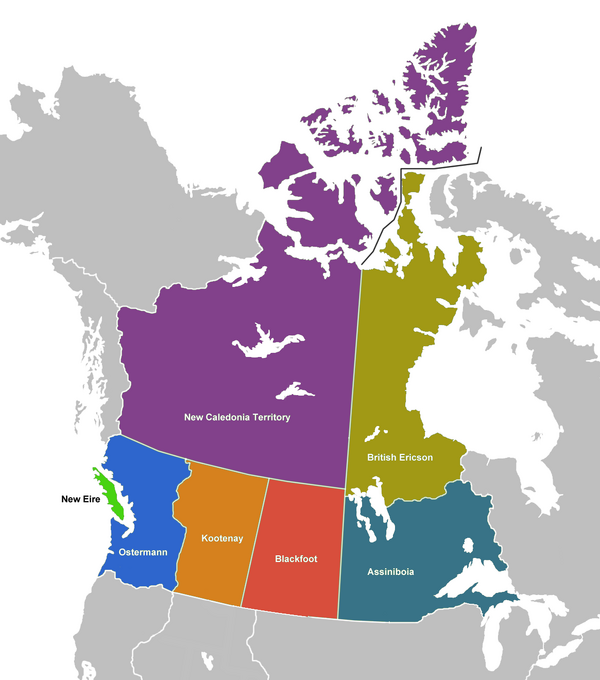 Retrieved from "https://althistory.fandom.com/wiki/New_Albion_(Sundered_Veil)?oldid=433117"
Community content is available under CC-BY-SA unless otherwise noted.