Niger (pronounced Nee-Jair) was a former nation in western Africa.

In May 2011 a leading group of Hausa tribal leaders began the formation of the nation of Maradikasa based in the south of the former nation of Niger.

After the establishment of the Fifth French Republic on December 4, 1958, Niger became an autonomous state within the French Community. It gained full independence on August 3, 1960.

For its first 14 years as an independent state, Niger was run by a single-party civilian regime under the presidency of Hamani Diori. In 1974, a combination of devastating drought and accusations of rampant corruption resulted in a coup d'état that overthrew the Diori regime. Col. Seyni Kountché and a small military group ruled the country until Doomsday.

It took several hours for news of Doomsday to reach the government of Niger, although no nuclear detonations occurred the effects were still felt across the country. Within months all remaining food aid in the country had been used and the population began to starve.

The military government quickly and brutally clamped down on any demonstrations against the government, thousands were killed, however this made the population more angry and rumors began circulating of massive food stores for the use of the military, government and their families while letting the rest of the people starve.

By the summer of 1984 the nuclear summer had begun to take effect and approximately 80% of the crops in the country failed due to drought. Due to the massive food shortages, and the continued drought, the population of Niger crashed between 1984 and 1989 from just over six million to under one million

By late 1984 the population were dying due to starvation, however the staff of the government and military still appeared well-fed, fueling more rumors of secret food stores. In the capital city of Niamey, riots broke out in October 1984, many government buildings were ransacked and burned, the military cracked down hard, shooting thousands and many hundreds simply vanishing.

By December 1984 the military government could no longer control the populace, Col. Seyni Kountche and several of his advisers escaped south in Nigeria and disappeared, the military and police disbanded. A temporary government was sworn in however without the support of the military, it fell by January 1985 and the general population were left on their own.

As a country Niger ceased to exist during 1985.

Chaos reigned over the next two years as former police and military units became warlords, however due to the ongoing drought and food shortages even these began to fall by the late 1980's.

When the nation of Niger collapsed, many areas reverted to small Hausa tribal kingdoms based around small farming townships, in the north many towns and cities (particularly the city of Agadez where the population dropped from 250,000 in 1983 to zero in 1999) were totally abandoned to the Sahara sands.

The population of the area now is around 1.5 million, the majority of the remaining population live in the relatively rich farmland in the south of the former nation near the former border with Nigeria.

There have been reports since 2008 that Nigeria was planning to expand into the rich farmland in the south of former Niger.

Due to these reports a meeting of Hausa and Fula tribal chieftains was called in 2009 to discuss the possibility of Nigeria taking over the area, 32 chieftains attend the meeting and every chieftain called for this take over not to happen.

In early 2010 another meeting of chieftains was called. They decided to try unifying all the Tribes in the south of former Niger, starting with the Hausa tribes in the former Niger districts of the South of Tahoua, Maradi west of Zinder.

In total 12 Hausa tribal chieftains united and began to form a higher chieftain group (named as the Governing Council) with each of the united tribes sending two men to sit on the group.

The first meeting of the Governing Council occurred on the 22nd May 2010 in the city of Maradi.

They decided that the provisional name of the new nation would be Maradikasa after the former Niger department around the city of Maradi, the new capital city. and the Hausa word for nation.

During the period directly after DD the rains in northern Niger failed totally for several years leading to the population to abandon huge areas to the encroaching desert.

However from the turn of the millennium the climate in the area became stabilized, with increased rainfall in the mountains in January to May or the wet season, this has led to the development of several small seasonal rivers that flow for two to three months per year.

scientist have started theorising that north Africa may be beginning to return to a climate similar to the Neolithic [1] period.

The future of southern Niger or Maradikasa looks bright, with increased rainfall across the south of the former nation have increased yields on farmland to a point where the export of food has become viable. Non food stuffs such as cotton and tobacco have begun to be grown for internal and cross border trade, particularly with Nigeria to the south. With the increasing farmland any future nation in the area will easily be able to expand northward.

The Governing Council is expected to form a new nation by December 2011. 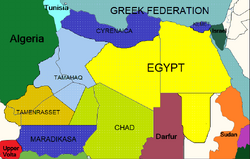 In the north, two nations have spread across the border from southern Algeria. These being:

In late January 2012 a contingent of 500 Northern Chadian troops crossed the former border into the west of the former nation of Niger heading for the oasis town of Bilma.

Retrieved from "https://althistory.fandom.com/wiki/Niger_(1983:_Doomsday)?oldid=1595610"
Community content is available under CC-BY-SA unless otherwise noted.