Origin of the Confederation

The Confederation originated during the Second Global War. Japan, allied with Napoleonic France, declared war upon Britain. Japanese forces conquered much of New France and the British colonies, occupying all of Oregon, Louisianne, large parts of Canada, and pushed the British back over the Appalachians. The leaders of the colonies gathered in the Continental Congress to form an emergency government. Each colony raised militia to defend their homelands, and united their efforts. By the end of the war, Japan had been forced out of most of the eastern British territories, though they continued to hold some land around the Great Lakes, along with large parts of Oregon and the far north.

After the war, the British government met with the new American government. Some in Britain wanted to return the situation to the way it was before the war, but most understood that the Americans could never be returned to colonial status, not without setting off a rebellion. And so, negotiations began to define exactly the relationship between America and Britain proper. These negotiations were complicated by simultaneous negotiations over the relationship of the parts of Britain herself, particularly the insular and mainland sections, as well as a growing sense that the emergency government that had served during the War was inadequate for peace.

The result in America of the negotiations was the Design for a Government of Eastern British North America, and the Act Establishing a Government for Oregon. The Design was ratified by the British Parliament and the legislatures of the original 15 provinces and colonies (now all provinces), and granted royal assent by King George I

In 1837, slavery was abolished in the British Empire, and the British attempted to enforce this ban on the North American Confederation. This led to the Slavery War (1838-1840), a rebellion in the southern part of the Confederation. The provinces of Henricia, Virginia, Maryland, Georgia, Cherokee Nation, North Carolina, Chickasaw Nation, Choctaw Nation, Creek Nation, Williamsland, South Carolina and Pensacola declared their independence from the NAC and the British Empire as the United States of North America. With British help, the rebellion was put down, and slavery abolished.

Throughout the latter 19th century, the Confederation sought greater influence on the North American Continent, playing a significant role in the independence of Texas, and in the same's expansion in the First and Second Texan Wars. The Confederation frequently came into conflict with the Empire of Mexico who also wished to become a great regional power.

These tensions came to a head during the Third Global War, which the Confederation lost. The province of Acadia was ceded to Canada, Godaiko was divided between Minnesota and Misuri, Michigan went to Misuri, and the Bahamas, Bermuda, and British Honduras, as well as the protectorates of the Republic of Yucatán and the Mosquito Kingdom, were annexed by Mexico.

Shortly after that war, Britain fell apart, and a new republic proclaimed. The king arrived in Philadelphia in 1893.

As England gradually succumbed to totalitarianism under Prime Minister, and later Regent, John Cartwright, there were those in the Confederation who sympathized with Cartwright's goal of reunification of the British Empire and vengeance for losses. Others sought to live in peace with their neighbors, seeking to regain lost territories through negotiations.

The Cartwright sympathizers formed themselves into a political party called the Phoenix Party. Branches of the party sprung up former Confederation territories. The Parté de la Liberté in Acadia, the Reunificationists in former Godaiko and Michigan, and, the Continentalists in the Bahamas and Jamaica, and the American Party in former British Honduras (now Belize). A party with the same name developed in Oregon as well.

Meanwhile, in the Confederation itself, the Phoenicians quickly rose to become the dominant political party. Unlike their counterparts in England, however, they respected the monarchy.

These external branches were not simply political movements, though politics was a part of it. They quickly swept control of the provincial governments established by their conquerors. However, their representatives in the new national governments consistently sought to disrupt governmental proceedings, and in the provinces themselves, they covertly supported terrorist actions against the occupying governments.

Mexico imposed martial law in those provinces, revoking all democratic processes, and brutally crushed the movements.

Misuri, Minnesota, and Canada were more civilized in that respect. They attempted to put down the rebellions without violating their new citizens' civil rights.

In 1921, the governments of Misuri, Canada, Aruta, Oregon, the Confederation, Arkansas and Texas met in Misurigawa, Mixixipi province, Misuri. They signed an agreement known as the Misurigawa Pact. Under this agreement, all territories formerly belonging to Oregon, the Confederation and Texas, under occupation by Misuri, Canada, Minnesota (Minnesota's foreign relations at the time were handled by Canada), Aruta, and Arkansas would hold referenda on whether or not to return to their original nations. Any provinces switching hands would be required to be demilitarized for 25 years.

Later that year, the referenda were held in all territories except for the Minnesota-held parts of Godaiko Province. Minnesota refused to permit the referendum, angered over Canada's callous disregard for their interests.

Those territories in which referenda were held returned to their original owners, and peace was seemingly assured.

Tensions remained high in Northern Godaiko, however, especially after Minnesota declared independence from Canada, and formed a military alliance with Mexico aimed at protection from the Confederation.

Shortly after the First Eurasian War, with the world balance of power suddenly drastically shifted, the Confederation declared war on Minnesota. The Minnesota War had begun. Troops were sent through the "demilitarized" provinces of Michigan and Southern Godaiko on their way to Minnesota. Fearing a Fourth Global War, the rest of the North American Powers, with the exception of Mexico, remained silent on the treaty violation.

Mexico reputed the treaty with Minnesota, instead concentrating on swallowing up the Caribbean.

Confederation forces did not stop at the border of Northern Godaiko (now reunited with Southern Godaiko as the Province of Godaiko) but continued on into Minnesota, emboldened by the rest of the continent's apparent refusal to go to war.

This, however, was the last straw, and the North American War (1925-1930) began. Canada, Aruta, Misuri and Arkansas declared war on the Confederation. Oregon declared war upon those powers in alliance with the Confederation, and Japan joined the fray declaring war upon Oregon. Florida and Mexico remained neutral.

The Phoenicians were banned, and a more democratic government established. In Misurigawa, the major North American powers, with the notable exception of Mexico, met once again to draw up a peace treaty. This treaty acknowledged the borders of the Confederation at their pre-GW3 state. It also created the League of North American States, with the intention of creating a body which would be able to solve international disputes on the Continent peacefully. The Confederation's military was reduced, and the victorious powers aided in the reconstruction of its infrastructure.

So successful was this reconstruction and concommitant gaining of the Confederation's friendship, that when the Second Eurasian War broke out, the Confederation fought alongside her former enemies.

The Confederation's Head of State is the King of the Commonwealth of British Nations, currently Joseph I. He is represented by a Viceroy when outside of the nation.

Each province is headed by a Royal Governor, initially appointed by the Crown, later delegated to the Viceroy. Each province also possesses an elected legislature, headed by a provincial Premier.

Under the Design, each colony, now established as a Province, was headed by a Governor appointed by the Crown (later delegated to the Viceroy) who served as the chief executive authority. The governors initially retained considerable authority, but have since become mere figureheads. Each province possessed an elected assembly. Over time, practical authority was devolved to leaders of these assemblies, the premiers. Each province possessed considerable autonomy in internal affairs. The Confederation as a whole would be lead by a Viceroy appointed by the Crown as the chief executive authority. The Viceroy's power, initially quite considerable, has diminished to a figurehead status. Legislative authority would be held by the Parliament for Eastern British North America (commonly referred to as the American Parliament, or just the American Parliament), modelled on the Parliament in Britain. The King, through his Viceroy, would retain the right of Royal Assent. In addition, the British Parliament would possess veto power over the acts of the American Parliament (subject to the consent of the Viceroy). In addition, the American Parliament could veto acts of the British Parliament pertaining to America by two-third vote of both houses. Amendments to the Design required consent of two-thirds of the both houses and ratifications by two-thirds of the provinces plus acceptance of the King and Parliament. Amendment was later altered to remove the requirement for the King and Parliament for most amendments.

The Nations are governed slightly differently from the Provinces. Having originated as sovereign nations rather than being creations of the Crown, each Nation has its own hereditary ruler, with an elected National Assembly, modelled on the British Parliament, and effectively identical to the provincial assemblies. In place of the Royal Governors of the provinces, the Nations have a Royal Representative. In practical terms, however, there is little difference between the Nations and the Provinces.

Gradually, the relationship between America and Britain has evolved, and the British Parliament has not used its veto power in well over a century, and has not attempted to legislate for America since the 1880's.

The North American Confederation borders Canada to the north, the Atlantic Ocean to the east, Florida to the south, and Arkansas, Misuri and Minnesota to the west. It also includes the Bahama Islands and the island of Jamaica.

The Confederation is commonly subdivided into 6 regions 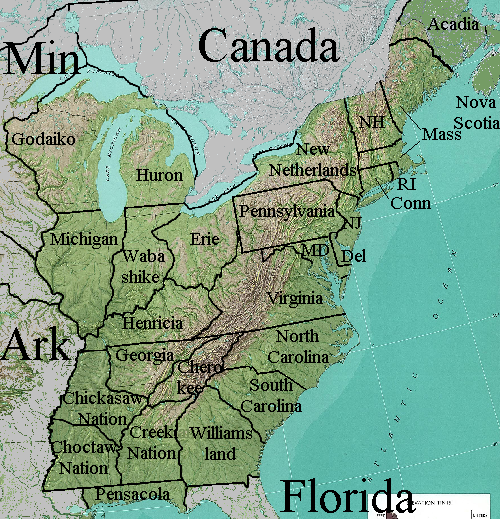 Listed roughly from north to south

From north to south

All of these are presently under Mexican rule