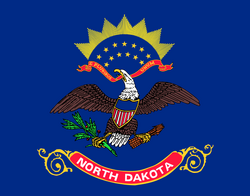 North Dakota was the 39th state of the United States of America. It was formed by the dividing of the Dakota Territory (formerly Native American homeland) into two states in 1889. Its capital was Bismarck and its largest town was Fargo (a twin city with Moorhead, MN). With a population of around 648,600 in 1980, it was ranked near the bottom in population among the states. It was losing its population after rebound in the 1970's.

North Dakota received multiple strikes on Doomsday. Due to the presence of Minutemen missile silos located at the Grand Forks AFB complex and Minot AFB complex, the Soviets targeted the region with a large number of nuclear weapons. Dozens of cities and towns in proximity of the silos were either destroyed or else so damaged that the populace had to abandon them, leading to a major refugee problems. The towns of Grand Forks and Minot were completely destroyed due to strikes on the nearby air force bases. Lakota nationalists used the chaos to assert their independence from the United States and subjugate the non-Lakotas who resided in western North Dakota.

After the Lakota War, the government of Wyoming (representing the allied survivor states that would form the Provisional United States) established the Missouri River as the eastern boundary of the Lakota nation. With ample land, in both Dakotas, the Lakota agreed to this boundary. According to the peace treaty and subsequent agreement to join the NAU, any expansion past the Missouri River was forbidden. However, the Lakota were granted a small corner of North Dakota north of the river reaching to the border with Canada.

Provisional Government of The Dakotas

Due to the extensive damage in the northern part of the state, the state government abandoned everything north of North 47° 50'. The government of the new state of Assiniboia (an extension of the former Manitoba, Canada) salvaged what they could of the mostly destroyed cities there according to their treaty of incorporation.

The South-Central and South-eastern North Dakota, which includes the cites of Fargo and Bismarck. Joined with survivors in South Dakota to form the Provisional Government of The Dakotas headquartered in Aberdeen in South Dakota's northeastern corner. In 2012 it joined the restored United States as the State of Dakota.