The Earldom of Orkney, Orkney, the Northern Isles, is a small constitutional monarchy formed of the far north of the island of Britain and several island groups surrounding the mainland. Its sole land border is with Man to the South. Its capital is Kirkwall and the population around 168,000.

The Head of State is Earl Haakon X.

The official language is Norn. Small pockets where Gaelic is spoken are mostly in the South and West.

It uses the Orkney Krone (OKK).

Raided by Vikings from the 7th century onwards, the Sodor (Mann) and Nordr (Orkney) islands were definitely held by Norse chiefs by the mid-9th century, ousting the Pictish kingdoms in the process. Often used a refuge for nobility fleeing the chaos in Hordaland the kings there saw it as a threat that needed to be extinguished. Magnus III Barefoot would campaign in the isles uniting under his rule. From there, he and his successors projected Hordaland's power to the West until halted by Vinland in the Battle for Iceland in 1510. Hordland's nominal rule of Orkney would last until 1783. During that time the real power of the Earls waxed and waned hitting their high point under the unified rule of Haakon Haraldson who was heir to and eventual ruler of both Hordaland and Orkney.

Orkney became sidelined during the later medieval period and it did little of note except provide a pool of manpower for Hordaland's occasional wars. In fact the earldom became horribly poor and neglected, however the constant flow of armies from Hordaland to Man and beyond maintained the border with the occasionally hostile Scotland. As Hordaland became mired in debt and exhausted by constant revolt in its Manx lands both Man and Orkney were given independence in 'The Accommodation' of 1783.

The wealth of the Earldom has improved from an extremely low base as agricultural methods developed and other sources of incomes found and fostered.

An exact demarcation of the maritime border with Man would not be reached until 1958 after several disputed islands had held plebiscites to decide which state they wished to belong to. The huge harbour of Skalpaflo is the Kalmar Union's main naval base in the British Isles.

Similar to most Kalmar nations, Orkney is a constitutional monarchy and is governed by a single Ting which is elected every four years.

The head of state is Earl Haakon X and he still retains various executive powers. The Prime Minister is Edmund Magnusson. 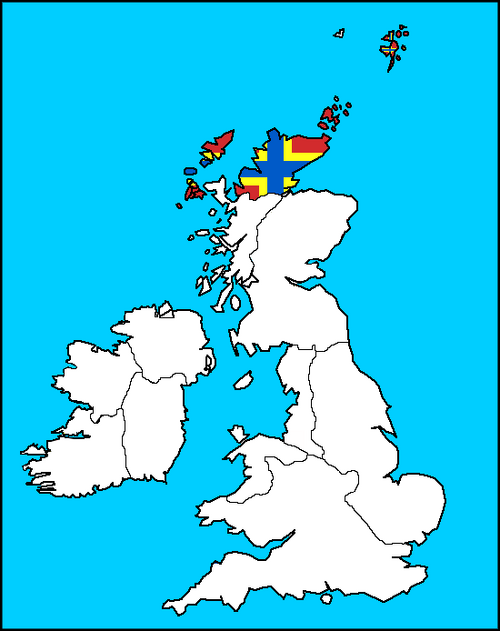 Retrieved from "https://althistory.fandom.com/wiki/Orkney_(The_Kalmar_Union)?oldid=1100255"
Community content is available under CC-BY-SA unless otherwise noted.