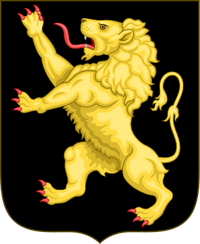 The territories that roughly correspond to the Netherlands, Luxembourg and former Belgium (known as the Low Countries) first emerged at the end of the Middle Ages as a series of independent and quasi-independent fiefdoms, linked to the Kingdom of France and Holy Roman Empire. The southern part of this region (Southern Netherlands, Prince-Bishopric of Liége, Imperial Abbey of Stavelot-Malmedy and the Duchy of Bouillon) was divided both politically and linguistically.  The feudal borders did not match the linguistic borders, and many fiefdoms were divided into both French and German regions. After the creation of the independent Dutch Republic in 1581 in the Northern Low Countries, French emerged in the Southern Netherlands under Habsburg nobility and French Invasions.

In 2007 there was difficulty forming a government, coupled with a problem of the Brussels-Halle-Vivloorde electoral district and the rise of extremist political parties. Until 2014, however, support for a unified state remained high, claiming the monarchy, national institutions and the linguistically and ethnically mixed Brussels served as unifying factors, and that a partition would be a blow the European Union's model of diverse cultures working together.

However, in 2014, support for independence rose again in Flanders. The recent independence of Scotland, and the success of Spanish Independence Movements, led to increased tensions. The Flemish Movement continued to gather support as nationalism soared in the region.

On April 10th, the day before the referendum, Belgian PM Charles Michel urged the unity of the Belgian people. Despite this, the following night, the referendum proved successful.

On the 3rd May, Belgian, Flemish, and Walloon representatives began discussions on the future of the state. However, as it became apparent Belgium may not survive, on the 18th July the German-Speaking Community demanded their future to be discussed, to prevent being swallowed by a monolingustic French state, and on the 16th September, German, French, and EU arrived for discussions.

After further discussions, it was agreed that Wallonia would join France, the German-Speaking Community would gain independence as Eupen-Malmedy, and Brussels would become independent. However, after the announcement, many Luxembourgish within Wallonia began to protest, and the Government of the Principality of Luxembourg started to put pressure on the French and Walloon governments for the return of the Luxembourg Province. There were some minor movements inside the German Speaking Community but these had little effect.

Massive anti-dissolution protests both in Belgium and around the world took place; many people held up signs promoting unity, while others waved Belgian flags. Despite this resistance, on the 24th October the final agreement was ratified. On the 7th April, 2015, the Kingdom of Belgium was officially dissolved.

With the integration of Belgium into France, Luxembourg and Germany, and the independent Flanders, it seems unlikely that a Belgian state will rise again. However, border changes and smoothing always remains a possibility.

Questions have also risen as to the future of Brussels, with some proposing direct administration by the EU, becoming a "European capital district", similar to Washington D.C. or the Australian Capital Territory, run by the EU. However, the EU's structure has no experience or allowances for governing on this level. Despite this, the fact that Brussels is already a city-state makes this easier. However, this has prompted Euroskeptic movements within the UK as a move to further integration and federalism.

Some have proposed that Brussels join either Flanders or Wallonia (and by extension France). Many believe that Brussels is geographically and economically embedded with Flanders, though some argue that Brussels should join Wallonia (sometimes called Wallobrux). However, as Brussels is an enclave in Flanders, it would be likely France would demand a corridor.

It has also been proposed that Brussels loses some powers and autonomy and becomes a Flemish-Walloon condominium.

Since Flemish independence, many Flemish people residing in the French arrondissements of Lille, Douai and Dunkirk, part of Nord-Pas de Calais, on the Flemish border, have petitioned to join Flanders.

Retrieved from "https://althistory.fandom.com/wiki/Partition_of_Belgium_(Scotland_says_%22Yes%22)?oldid=1418184"
Community content is available under CC-BY-SA unless otherwise noted.