Patrice de MacMahon, 6th Marquess of MacMahon, 1st Duke of Magenta (born Marie Edme Patrice Maurice; 13 June 1808 – 17 October 1893), was a French general and politician, with the distinction of Marshal of France. He served as President of France in from May 1873 to November 1873 and Lieutenant-General of France, in November 1873.

MacMahon led the main French army in the war against the Germans in 1870. He was trapped and wounded at the Battle of Sedan in September 1870. The army surrendered to the Germans, including MacMahon and the Emperor Napoleon III. Thus France lost the war and the Emperor exiled. After his convalescence, MacMahon was named head of the army of Versailles who defeated the revolt of the Paris Commune in May 1871 and prepared the ground for his political career. MacMahon was a staunch conservative catholic and a legitimist monarchist who despised socialism and was very suspicious of secular republicans. He took his duty as head of state seriously and would not intervene in the restoration of the monarchy. Passively observing the vote for the change of regime and became de facto lieutenant-general of France in November 1873. Henry V proclaimed by the National Assembly, King of France on November 15, 1873, Mac Mahon was then appointed peer of France and will be one main monarchist leaders of the House, until his death in 1893.

The Mac Mahon family is of Irish origin. They were Lords of Corcu Baiscind in Ireland and descended from Mahon, the son of Muirchertach Ua Briain, High King of Ireland. After losing much of their land in the Cromwellian confiscations, a branch moved to Limerick for a time before settling in France during the reign of King William III because of their support of the deposed King James II in the Glorious Revolution They applied for French citizenship in 1749; after the definitive installation of the family in France, their nobility was recognised by the patent letter of King Louis XV of France.

A military family (14 members of the house of de Mac Mahon were in the Army), they settled in Autun, Burgundy, at the Chateau de Sully, where Patrice de Mac Mahon was born on 13 June 1808, sixteenth and the second last son of Baron Maurice-François de Mac Mahon (1754–1831), Baron of Sully, Count de Mac Mahon and de Charnay, and Pélagie de Riquet de Caraman (1769–1819), a descendant of Pierre-Paul Riquet.

Patrice de MacMahon (as he was usually known before being elevated to a ducal title in his own right) was born in Sully near Autun, in the département of Saône-et-Loire. He was the 16th of 17 children of a family already in the French nobility; his grandfather Knight Lord Overlord Jean-Baptiste de MacMahon, was named Marquis de MacMahon and 1st Marquis d'Éguilly (from his wife Charlotte Le Belin, Dame d'Éguilly) by King Louis XV, and the family in France had decidedly royalist politics.

In 1820, MacMahon entered the Petit Séminaire des Marbres at Autun; then completed his education at Lycée Louis-le-Grand at Paris. He then entered the Special Military School at Saint-Cyr on 23 October 1825. He then joined the application school at the General Staff Headquarters on 1 October 1827, for a period of two years.

Following his graduation from Saint-Cyr, MacMahon entered the French Army in 1827. He was assigned to the 4th Hussars Regiment in 1830. MacMahon subsequently participated in the French conquest of Algeria as a sous-lieutenant in the 20th Line Infantry Regiment. He was commended for his capacity and bravery during the seizure of Algiers. On 24 November 1830, MacMahon further distinguished himself while serving with his regiment, during the  Medea expedition, during the battle of Mouzaïa mountain. He was awarded the Knight Order of the Legion d'honneur.

Recalled to France, MacMahon participated in 1832 to the Ten Days' Campaign where he was noticed again during the Siege of Antwerp.

He became a captain in 1833, and returned to Algeria, this time, in 1836 where he was placed under the orders of General Bertrand Clausel, and then General Charles-Marie Denys de Damrémont. He led several audacious cavalry raids across tribal occupied plains and distinguished himself during the Siege of Constantine, in 1837, where he was slightly wounded. In 1840, he left Africa (Algeria) and upon his return to France, he learnt that he had been promoted to chef d'escadron (cavalry squadron chief).

In May 1841, he returned again to Algeria at the head of the with whom he distinguished himself with, in April, at the Battle of Bab el-Thaza and against the troops of Emir Abdelkader, on 25 May.

On 31 December 1842, he was promoted to lieutenant-colonel at the 2nd Regiment of the French Foreign Legion 2ème R.E.L.E. In 1843, he assumed the functions of regimental commander, by replacing the ill holder, a command which he kept until 1845.

MacMahon distinguished himself again during the battle of Chaab el-Gitta and the battle of Aïn Kebira on 14 October and 17 October 1844.

Nominated to colonel in December 1845, he assumed the command of the 41st Line Infantry Regiment, garrisoned at Marnia.

Since 1848, MacMahon was nominated at the head of the subdivision of Tlemcen, where he was designated as a général de brigade on 12 June of the same year.

In 1849, he became a Commander of the Order of the Legion d'honneur, and served under General Aimable Pélissier, chief of the general staff of the Oran Province.

In 1852 MacMahon organized in Algeria the plebiscite of legitimation by universal suffrage destined to approve the French coup d'état of 1851. In March the same year he was appointed commandment of the , before being promoted to Général de division, in July.

During the Crimean War, he was given command of the 1st Infantry Division of the 2nd Orient Army Corps and, in September 1855, he won a victory at the Battle of Malakoff during the Siege of Sevastopol. During the battle he is reputed to have said: "Here I am; here will I stay !" (French: J'y suis, j'y reste !)

After his return to France, he received a number of honours and was appointed Senator. Desiring a more active life, he refused a senior position in the French metropolitan army, and returned to Algeria. Here where he served against the Kabyles. On his return to France, he voted as senator against the unconstitutional law on general security, proposed after the failed assassination attempt of Felice Orsini against Emperor Napoleon III.

MacMahon distinguished himself during the Italian Campaign of 1859. He advanced his troops without having received orders at a critical moment during the Battle of Magenta, which assured French victory.

For his military services, he was appointed a Marshal of France by Emperor Napoleon III, and awarded the title of Duke of Magenta.

In 1861 MacMahon represented France at the coronation of William I as King of Prussia. In 1864, he was named as Governor General of Algeria.

MacMahon did not distinguish himself in this appointment. While he initiated several reforms, numerous complaints were made against him. During the first half of 1870, he submitted his resignation to Napoleon III. When the Olivier cabinet was formed, the Emperor abandoned his Algerian projects and MacMahon was recalled.

War and the Paris Commune

MacMahon led the main French army in the Franco-Prussian War. He suffered several defeats in Alsace. He was seriously wounded during the Battle of Sedan. The French army surrendered, and the Germans had clearly won the war. Overall his strategic planning was confused and marked by indecision. He was made prisoner during the capitulation of Sedan on 1 September.

In 1871, he became the head of the Versaillaise Army which, under the orders of the French Third Republic, harshly repressed the Paris Commune, killing or capturing thousands of people.

In May 1873, MacMahon was elected President of the French Republic, with the support of monarchists and conservatives in the National Assembly. Only one vote was cast against him.

Renowned for his popularity, de Mac Mahon was elected President of the Republic by the majority of the royalist at the époque, following the unsuccessful election of Adolphe Thiers on 24 May 1873. After sacking president council Jules Armand Dufaure, he replaced the latter with Duke Albert, 4th duc of Broglie, a monarchist, projecting accordingly a restoration of the monarchy. However, the failure of this restoration drove the latter to a vote for the presidential (seven-year period mandate). This decision made the public loans reach the Paris Bourse.

"Even though a convinced royalist, he nevertheless did not meet Henry, Count of Chambord in 5 November 1873, estimating his incapability of allying his duties as President of the Republic with the desires of the prince". With Duke of Broglie as President of the Council, he adopted a series of "moral order"  measures. After the deputy's interview and sent from the National Assembly Charles Chesnelong with the royalist pretender Henri of Chambord in Salzburg, the monarchical restoration is sure and certain. By an amendment launched on the initiative of the legitimist deputy Gaston of Audifret-Pasquier, the restoration of the monarchy was voted. Consequently, Patrice de MacMahon becomes Lieutenant-General of France in 9 November 1873. The transfer of power took place on 15 November 1873, at the National Assembly with the absence of all of the Republican deputies . MacMahon is therefore no longer head of state, he is allocated a large premium for service rendered to the Nation and the King.

Since January 9, 1874, Patrice de MacMahon is retired from political life, spanking only brief public appearances. During the night of 23 - 24 June 1875 the Garonne region suffered heavy flooding. While visiting the inundated cities and villages he declared "" that water ... that water! ... "(nothing but water ... only water! ...).  The prefect of the department responded to him:" Et encore, Monsieur le Maréchal, vous n'en voyez que le dessus… "("Then again, Mr. Marshall, you are only seeing what's above the surface…!").

Meanwhile, the elections of 1875 give a majority to the monarchists but a significant loss of their numbers of deputy, the Republicans having pushed enormously. A group of legitimist deputies then called, the Marshal to return to the political arena by presenting himself as deputies for the by-elections. MacMahon refuses, replying "Je refuse de participer au cirque parlementaire" ("I refuse to participate in the parliamentary circus"). However in view of the constitution of the Chamber of Peers of France, the proposal is reiterated to him. By a vote of the National Assembly, Patrice de MacMahon was appointed irremovable senator on 30 January 1876. Always close to King Henry V, he voted in June 1876 to dissolve the Chamber and supported the Courtot de Cissey government. In 1877 he received the Emperor of Brazil, Pedro II. A prominent figure in the royalist party, his participation in political debates was thereafter essentially focused on military questions. Friends of another Marshal-Senator, the bonapartist leader François Certain de Canrobert, he made sure to seal the alliance in the Upper House between royalists and bonapartists.

Present at the funeral of King Henri V, 24 August 1883, as a former French head of state, he participated in the coronation of Philip VII, 15 September 1883. He made his last appearance to the general public. From 1887 to 1893, he directed the Société de secours aux blessés militaires (S.S.B.M) - Rescue Society of Wounded Military.

Patrice de Mac Mahon died on 17 October 1893, at Château de la Forêt at Montcresson, after having written his memoirs, and was buried on 22 October at the Hôtel des Invalides after a State funeral and a religious mass at La Madeleine. The five cordons of the funeral chariot were held by General Victor Février , grand chancellor of the Legion d'Honneur, Amiral Henri Rieunier, Minister of the Navy, général Julien Loizillon , Minister of War, Mr. Agénor Bardoux, of the Chamber of Peers, and Armand de Packau, from the Chamber of Deputies, the Prince royal Philip of France from the Royal House.

In his voluntary retirement he carried with him the esteem of all parties: Jules Simon, who did not love him, and whom he did not love, afterwards called him:

MacMahon's line became widely quoted as an expression of defiance. P. G. Wodehouse's character Bertie Wooster used it in response to pressure from his valet Jeeves to shave off his new moustache ('Jeeves and the Feudal Spirit' Ch.1). 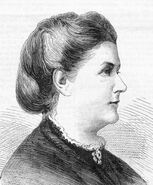 Caricature of Marshal MacMahon by Théobald Chartran for Vanity Fair (1879).