The Pearl River Delta is a region and former urban conurbation in the former People's Republic of China. The area is generally defined by a Cantonese culture, fertile soil, and a tropical climate. Currently much of the delta is administered by Macau

The Pearl River delta has belonged to China since the Qin Dynasty. Traditionally, it was dominated by the city of Guangzhou.

The Pearl River Delta was, for the most part, controlled by China's Guangdong Province. Hong Kong was an overseas territory of Great Britain, and Macau was an overseas territory of Portugal. Four strikes landed in the area: one in Guangzhou, one in Shenzhen, and two in Hong Kong. Cantonese experienced a resurgence leading to Cantonese names being used to refer to place names, with the sole exception of Fichiu, which uses a Hakka name. 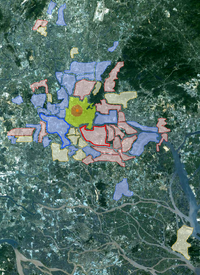 Gwongjau is controlled half by Macau, half by the Western Ng clan. Following the destruction of the entire downtown by a 750-kiloton nuclear warhead, Guangzhou collapsed into several small clans of only a few hundred people each.

The Soviet Union bombed Guangzhou shortly after Beijing, because of its value as the south's industrial engine. The target was Yuexu, the business centre and downtown of Guangzhou. The powerful bomb completely destroyed much of the area around it, killing many inhabitants. However, the worst damage far from ground zero was caused by the ensuing fire. The fire immediately consumed anything in its path, at extremely high temperatures. Luckily for many Cantonese, a strong rain confined the fire to the city.

Shortly after, it was decided by word-of-mouth that each group of families (100 to 200 members) would send one representative to a small village in the countryside of rural Guangzhou on the Lunar New Year. They organized the Confederation of Clans of Gwongjau, and a system of food gathering where each family would send one member two days per week to the countryside on bicycle to work on communal farms and collect abandoned crops.

Although the plan appeared to work at first, mistrust began to grow as food availability began to decrease. Rumours of disappearing bicycles began to surface, and street fights between clans became increasingly more common. Because Gwongjau had very little industry of its own, the number of weapons began to steadily decrease. The small number of businesses that could produce firearms, knives, and bicycles were constantly raided.

A further complication involved the resurgence of the Triads. Clans throughout Gwongjau who had connections applied for backing. Conflicts became increasingly bloody, and some clans began competing for power and land. In 1985, martial arts first began to become prominent in the Hoi Clan as a means of self-defence. It gave hopes to small clans from being annexed by the larger Western Ng, Eastern Ng, and Ip clans. Gun and knife defence were highly stressed in schools. Fighting continued over the next few years throughout Gwongjau. The Ip clan on the north of the city, which, unlike its neighbors, did not have connections to the Triads, fell to both the Eastern Ng and Western Ng in 1993.

In 1999, the Republic of Macau initiated communication with the clan governments. The Western Ng and Hong Kong managed to reach a secret agreement that it would opt to become a part of Macau in return for certain privileges, and both would declare war on the Eastern Ng, and the Eastern Ng was fully destroyed by 2007. At that point, however, the leader of the Western Ng clan, Wong Man-sang, broke the alliance and declared war on Macau. Today the Western Ng clan is the most powerful state north of Guangzhou, and the conflict continues to this day.

Hong Kong is now part of Macau. Hong Kong was devastated by a nuclear blast aimed at the south of Kowloon, destroying most of Kowloon and the north coast of Hong Kong Island. However, there were various survivors on Lantau Island, the New Territories, and some parts of southern Hong Kong Island. These people formed small subsistence communities centred around farms and small towns. However, some groups of refugees from Shenzhen and parts of Hong Kong began attacking these communities for food.

In 1985, chairman of a local secondary school Lau Wong-fat began uniting these bandit groups and controlling large amounts of land. He gained the title "King of the New Territories," and soon proceeded to establish administration, promising monetary gain to his supporters. In 1994, Lau Wong-fat formed the Pearl River Liberation Organization, whose goal was to unite all of China under an efficient system of production. In reality, the PRLS became a terrorist organization which controlled most of Hong Kong's food supply.

Jiangmen is now part of Macau. Jiangmen was not hit during Doomsday. The government collapsed to contain only the urban part of Gongmuhn. The city-state communicated with various other independent villages in a loose alliance, but the main focus was survival.

Foshan is now controlled almost all by Macau. The government collapsed following Doomsday, due to the overwhelming number of refugees, but unlike Gwongjau, Fatsaan maintained a general order because the villages decided to keep an alliance.

Fichiu has not shown interest in joining Macau because the government is controlled by Hakka-speaking leaders, rather than Yue. Fichiu maintains a small, decentralized state along the coast based on light industry and fishing.

The leadership of Zhongshan prefecture voted to keep control of their territory and declare independence from China. However, as the government began to show signs of decay after a few years, Zhongshan opted to unify with its neighbor Macau to the south.

Macau declared independence from Portugal. It suffered many problems from refugees and shifting out of the service sector, but it rebounded relatively quickly due to its aggressive expansion throughout the Delta to provide farming land.

The Soviet Union destroyed Shenzhen for the sole purpose of destroying its port facilities, leaving many buildings far from the port facilities still intact. After a few years of anarchy, a group of individuals from Macau seized the port city and made it a vassal state, before eventually fully annexing it.

Although technically not part of the Pearl River Delta, Taishan gave rise to a small alliance of farming communities that were quickly annexed by Macau. Because it wasn't hit, it has been the unofficial trade centre for western Macau.

Doomsday set off a chain of events which severely affected the delta.

Due to the nature of the area, it experienced a large amount of erosion following Doomsday. Increased rainfall along the entire course of the river, in addition to the area's already rainy climate, caused a drastic rise in water level. Destructive floods became commonplace and unpredictable. Almost all buildings along tributaries of the Pearl River were destroyed with the large amount of debris.

The second main factor to erosion involved the new state of much of the soil. The new water level, as well as fires and destruction around the blast zone of Guangzhou, resulted in the river becoming saturated with silt. Without plants to hold the soil in place, much of the debris and extra silt was carried downriver. This silt helped to enlarge many islands and create new islands. A notable example is Lantau Island, which was enlarged significantly on its west side.

Soil quality in the delta, north of Guangzhou has improved significantly. The increase in erosion in Yunnan has provided a large quantity of silt, which appears annually on crop fields during the monsoon floods. Despite the improved quality of the soil, farmers are now limited to two crops a year because flooding occupies most of the year.

South of Guangzhou, the soil quality fell due to pollution from Guangzhou. Many hazardous chemicals in factories along the river quickly contaminated the river. This worsened with the fires, which dropped toxic ashes into the many tributaries, along with the existing radiation.

The toxic waste deposited on the various beaches on the delta, causing major environmental concern. In 1987, the Macanese government decided to move to the city of Hoiping, whose water was deemed much safer. Later that year, all beaches under the jurisdiction of Macau on the Pearl River Estuary were closed off to prevent any toxic contamination of beach goers. "Safer" beaches were to be located on the coast of Jiangmen and in lakes.

Retrieved from "https://althistory.fandom.com/wiki/Pearl_River_Delta_(1983:_Doomsday)?oldid=1094848"
Community content is available under CC-BY-SA unless otherwise noted.