Pelee is an island in Lake Erie situated between Ontario and Ohio, between the territories of the London and Toledo city-states. The rest of the Lake Erie Islands, along with some shore land on the Ontario side, are part of Pelee's area of control.

Pelee and the other islands formed an important trade route across the lake during pre-colonial and colonial times. In 1788 the British government leased the island to one Thomas McKee, initiating English settlement. Farming and logging fueled a strong local economy from the 1830s. In the late nineteenth century, Pelee was a wine-making center. By the late twentieth century, tourism was the most important economic activity.

On Doomsday, there were several strikes across Lake Erie. The Greater Detroit-Windsor Area was destroyed, along with Erie, Pennsylvania and Cleveland, Ohio. Minor fallout came from Cleveland, grazing the south-east corner of the island. Most of this fallout luckily blew west, saving the lives of the islanders.

Days after Doomsday, the islanders were in a panic with no way to know exactly what had just happened. Many locals with family in mainland Ontario made the risky decision to brave a journey by boat, but most did not come back. The citizens' next concern was food supplies. The island was a food exporter and could in theory support the population, but contaminated lake water badly compromised the food supply, spreading disease and unrest.

Surrounded by destruction, Pelee entered a long period of almost total isolation. The only regular contact was with Americans to the south living on the Bass Islands. The entire Lake Erie archipelago had formed an informal confederation by 1985, trading for what they needed and consulting each other for important decisions.

This relative stability came to an end in 1989 when the islanders gathered at the harbor to watch two battered ferryboats approach. A few warning shots from the boats dispersed the crowds. When the boats docked, a large gang of armed men, a mix of Americans and Canadians, rushed out. They overpowered the brave but feeble defense mounted by those islanders who had guns. A last stand at the island's north point surrendered a few days later, giving the armed group control of the island.

The military rulers took over the island in a time when contact and trade between the different shore communities was increasing. They became some of the most powerful of the many pirate groups that emerged during this time. 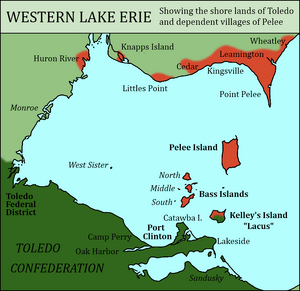 Over the years, Pelee's military has mellowed somewhat and mixed with the population. The consolidation of larger powers in the region, notably Toledo, made wholesale piracy too risky. Now, Pelee is not a direct threat to its neighbors, though vessels sailing without the flag of an important power still expose themselves to danger (as true at Pelee as anywhere else in the Great Lakes). The island has a tough, broad-based military culture: essentially, the old pirate gang has become the military of the island, and all citizens are required to contribute some service.

Pelee is the center of an economic web of tributary village-states along the lakeshore. The area is mostly wild, and the island's rulers are a part of that wild world, one of the main local powers in a chaotic region. They have been able to play the larger Ontario players against one another to maintain their position, and mostly try to avoid the larger Canadian government to the east. They are a regional ally of Superior.

The leader of Pelee has borne the title of Captain since the day the pirates got off the boat. The Captain has lots of power but is elected in a fairly democratic way by all current and former members of the military - essentially, all citizens. The current Captain, Jonah Waters (certainly not his original name), was a member of a rival gang who was captured in the late 90s and later defected, becoming a Pelee citizen. Pelee does not have a mature legislature, just a council of prominent local leaders chosen essentially by the Captain's appointment and general consensus.

Pelee's flag was originally a war banner for the military. The original was made from the hoist of a Canadian flag with four red strips attached.

Retrieved from "https://althistory.fandom.com/wiki/Pelee_(1983:_Doomsday)?oldid=1503629"
Community content is available under CC-BY-SA unless otherwise noted.