History of the USSR

The Union of Soviet Socialist Republics - USSR, Russian: Союз Советских Социалистических Республик - СССР, informally known as the Soviet Union or Soviet Russia, was a constitutionally socialist state that existed on the territory of most of the former Russian Empire in Eurasia between 1922 and 1983.

The Soviet Union had a single-party political system dominated by the Communist Party. Although the USSR was nominally a union of Soviet republics (of which there were 15 after 1956) with the capital in Moscow, it was in actuality a highly centralized state with a planned economy. Much of Soviet society was overseen by national security agencies such as the KGB (which was active from 1954).

The Soviet Union was founded in December 1922 when the Russian SFSR, which formed during the Russian Revolution of 1917 and emerged victorious in the ensuing Russian Civil War, unified with the Transcaucasian, Ukrainian and Belorussian SSRs. After the death of Vladimir Lenin, the first Soviet leader, power was eventually consolidated by Joseph Stalin, who led the country through a large-scale industrialization with command economy and political repression. During World War II, in June 1941, the Soviet Union was attacked by Germany, a country with whom it had signed a non-aggression pact. After four years of warfare, the Soviet Union emerged as one of the world's two superpowers, extending its influence into much of Eastern Europe and beyond.

The Soviet Union and its satellites from the Eastern Bloc were one of two participating factions in the Cold War, a global ideological and political struggle against the United States and its allies; which culminated with the accidental deployment of nuclear weapons on the 26th September 1983, otherwise known as Doomsday.

As reports of incoming American ICBM flooded Soviet airwaves senior officials, political leaders, and high ranking military commanders were rushed to command bunkers throughout the Soviet Union. Though the people in Eastern Europe and Central Asia usually did not have time to escape the missiles launched from Western Europe, the officials in Siberia had extra time to reach these fortified areas. Better yet was that many of these bunkers were well hidden from western intelligence, and virtually unknown to the Chinese. All aircraft and warships stationed in Siberia were ordered to leave over the Pacific and Arctic Oceans partially on missions to destroy American targets but mostly to avoid getting destroyed at home.

The civilians living in Siberian cities, however, had less warning, having received evacuation orders only moments before the nukes hit. Most military bases and all major cities were hit. Most notably hit was the port city of Vladivostok, and the biggest of the Siberian cities - Novosibirsk - where as many as 4 million people alone died. Compared to the rest of the Soviet Union however, Siberia had handled this disaster much better. All in all it had been hit by less than 14 nuclear devices. Given that almost all of these went off in the south or along the southern Pacific coast and that most of the small towns in the north were unaffected, Siberia, north-east Kazakhstan and the Russian Far East had a legitimate chance of survival. In the meantime, however, the surviving Soviet government had to deal with the thousands of military men and women coming back to destroyed ports and bases, and hundreds of thousands of people trying to escape the demolished cities.

It is estimated that of the USSR's population in 1983 of approximately 270 million, less than forty million survived to the end of the year.

WCRB Report of the former USSR

With renewed contact with several nations within former USSR, a picture can be painted of what the former Soviet political landscape looks like today. This map will be updated as new states are discovered. 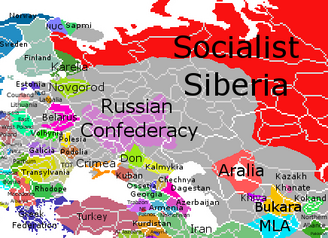 The map shows us the location of known states within the former Soviet Union; many more small and very localized ones are expected to be discovered as WCRB and Siberian teams move into unexplored parts of the region. While there are many tiny city-states, nomadic bands, and unorganized villages, these states reportedly are powerful enough to influence the allegiance of the smaller villages and cities, or are able to assert a measure of control over an area further from their center of power. These states are:

After Doomsday most of the USSR collapsed, except in East Kazakhstan and Asiatic Russia. Many new states arose from the chaos. These are all of the known states that have arisen, including the surviving remnants of the Union, known most often as Socialist Siberia.

Also, the former regions of Moldovia and Budjak are today under the control of the Romanian successor state of Transylvania, though are currently uninhabited due to radiated soils preventing the growth of crops. Crimea frequently patrols areas of the southern coastline of the Ukraine as well.
Retrieved from "https://althistory.fandom.com/wiki/Post-Soviet_Union_States_(1983:_Doomsday)?oldid=1527934"
Community content is available under CC-BY-SA unless otherwise noted.