Russia is the only European nation which suffered more casualties in ALT than in OTL. Because of the Soviets aggression in the East against Japan and China and because of the effective defensive strategies Rommel used in Europe, an additional 2 million people died and 3 million were wounded than in OTL. Despite this extra loss, the soviet Union finished the war in a position of great strength. It incorporated Manchuria into the S.S.R. and held Finland, Norway, Mongolia, and Korea as satellite nations.

After the war, Russia was not eager to expand further in Europe or Asia. It was able to hold the territory it gained during the war, and was able to exert significant political influence throughout the world. Russia remained fearful of another invasion from Germany and all its post-war policies should be viewed in this anti-German light. 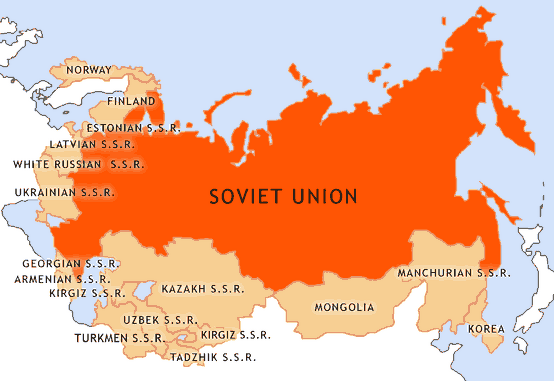 Germany gained a large amount of territory during the war but faced serious issues after the war. The new territories were sometimes in revolt, especially in former Poland and Czechoslovakia. There were also large war debts to be paid. And the pool of able-bodied men had been depleted.

Hardliners within Germany considered Rommel to be a traitor, who gave away at the conference table what Germany had gained on the battle field. Rommel faced continual challenges to his power. He stepped down in late 1946 after he was seriously injured by an assassination attempt staged by a Check separatist. The next Reich Chancellor was Albert Speer.

Speer was well regarded by the Nazis, by the industrialists, and by the moderates. His organizational abilities were well suited to rebuilding and consolidating a greater Germany. During his reign Germany gave up Croatia, Serbia, and Bulgaria. Speer personally oversaw the rebuilding of the Reichstag and set Germany on a more democratic footing.

It should be noted that in this timeline there was no “Final Solution” but the Jewish population was still treated very poorly. After the war there was massive Jewish emigration from greater Germany. Most moving to the UK and USA but there was also a large number who moved to the holy lands. There was some talk of forming a Jewish state but no such state was actually created. 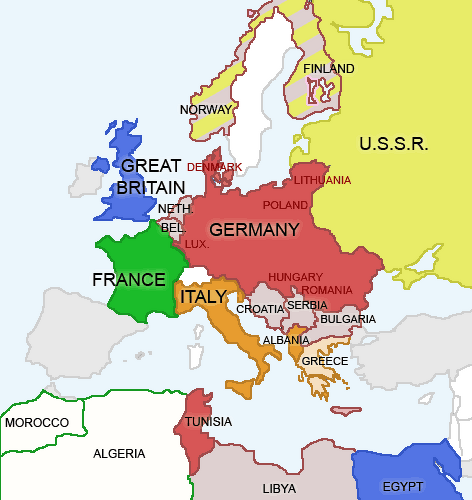 The UK suffered less than half the casualties in this ATL world than it did in OTL. It had endured the retreat at Dunkirk, The Battle of Britain, and the Battle of the Atlantic. Preparations were well underway for an Operation Torch style invasion of North Africa when the war ended in the Treaty of Paris. Post-war UK was very strong. It was the undisputed ruler of the seas, it retained a large industrial base and workforce, and it had considerable political clout.

It was through UK influence that Belgium and the Netherlands regained a large degree of freedom. The Treaty of Paris made both Belgium and the Netherlands into a demilitarized zone, it also strictly limited the size of France’s military. It did not, however, place any limits on foreign armies stationed in France. France took advantage of this loop hole by allowing the UK to station a large number of troops in France near the Belgium border. The postwar relationship between the UK and France was very good.

The US post-war sphere of influence was considered to be the Americas and the Pacific, but not Europe, Africa, or the Middle East. To discourage further soviet expansion, the US kept a strong presence in Japan. It also encouraged Germany to act as a check against Soviet expansion in the West. US - German relations were relatively good. The USA in this timeline was much less extroverted than in OTL and was also not as well regarded in the West.

After the war America continued efforts to develop the atomic bomb, successfully testing such a device in 1950. Germany finished its development of an A-bomb in 1953. And Russia entered the nuclear club in 1954. These weapons had not yet been used in warfare so their more terrible properties were unknown. They were considered by military planners to be a super-bomb to be used in a nearly conventional manner.(!!!)

France did not suffer as much from the war as OTL in terms physical damage or loss of life. However the damage to France’s reputation was more severe. The perception was that they had not “earned” their place in the world by defeating the Germans but rather they had victory given to them through the negotiation efforts of the UK. France attempted to “prove” itself by adopting an aggressive foreign policy in sub Saharan Africa and other parts of the world. Despite their distrust of the Nazis, Germany proved to be a valuable trade partner.

Return to See Paris and Die