What if we reversed the directions of Ronald Reagan and Jimmy Stewart's lives and careers?

In 1985, in recognition of twenty-five years of staunch support for the Republican Party, the Conservative Actor Ronald Reagan was invited to the White House by the fortieth President of the United States, James M. Stewart.

Closely associated with organized labour for much of his entertainment career, Reagan switched his political affiliation after being fired for criticizing the Tennessee Valley Authority for "big government". His employers considered the comments were inappropriate from a company spokesman given that General Electric had contracts worth millions of dollars with the Authority.

And so a promising career in politics that had begun as president of the Screen Actors Guild, and later developed as G.E. spokesman was finished, and at age fifty, a return to the screen appeared wildly improbable. Yet, cast as the villain of the 1964 movie "The Killers", he delivered a memorable performance[1], and Reagan was able to launch the second, and infinitely more rewarding phase of his acting career. 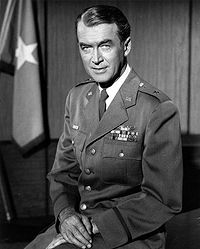 If the evergreen Ronald Reagan was successfully adjusting to late middle age during the mid sixties, then surely Jimmy Stewart knew his best days in acting were well and truly over by then (at age fifty he insisted on playing the part of twenty-five year old Charles Lindbergh). Yet his hesitant screen persona contrasted sharply with his radical right wing views. In fact in 1947, a heated political argument with his friend Henry Fonda escalated into a fist fight, briefly revealing the concealed inner steel that enabled him to gain high rank in the Second World War. Running for Governor of California in 1966, his friend John Wayne declared his support in a political advert "I could speak of many in my profession who have helped to mold the destiny of this nation. Time limits me to a few. In World War II, Colonel James Stewart (pictured, right) led 900 heavy bombers over Berlin. Does anyone think that was because he's a fine actor? I'd say it was because Jimmy was acting for real[2]".

With Reagan back in Hollywood and still laying into big government, Jimmy Stewart was reverting to the character of the Air Force Colonel. A "hawk" on the Vietnam War he shocked an interviewer by saying that he "absolutely hated" students who dodged the draft, condemning them as "cowards". Finding a soul mate in President Nixon, Stewart was sent on a number of overseas diplomatic missions in the late sixties and early seventies. Declining to run for a third term as Governor in 1975, Stewart dedicated his time to winning the real Academy Award, the ultimate acting role of President. Ironically he achieved this goal in a close fought election in 1980 against another Jimmy, and surely President Carter was a man almost as hesitant and awkward as one of his own acting parts.

NOTES. 1) In our OTL his performance was weak. 2) John Wayne did provide his endorsement but in support of a Reagan Candidacy.

Retrieved from "https://althistory.fandom.com/wiki/President_Jimmy_Stewart?oldid=1073038"
Community content is available under CC-BY-SA unless otherwise noted.