Robert D. "Bob" McEwen (born January 12, 1950) was the 44th President of the United States of America serving from January 20th, 2001-2009. Before being elected to the Presidency, McEwen served as a state legislator, U.S. Representative, and U.S. Senator. McEwen has been described as a "textbook Republican" who is "Pro-Life, Pro-Gun, Pro-Lower Taxes and Less Government". 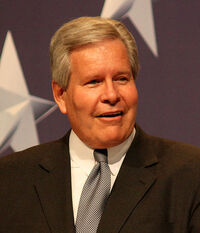 McEwen was born and raised in Ohio. He graduated from the University of Miami in 1972 with a Bachelor's in Business Administration.

McEwen is married to Elizabeth "Liz" Boebinger and has four children: Meredith, Jonathan, Robert, and Elizabeth. The McEwen's are members of the Church of Christ.

After working in the real estate business for a time, McEwen was elected to the Ohio State House at the age of 24. McEwen would be re-elected twice.

In 1980, McEwen was elected to the U.S. House of Representatives from the Ohio Sixth District. McEwen established himself as a champion of conservative principals and was easily re-elected in 1982, 1984, and 1986.

In 1987, at the advice of Phil Gramm, McEwen announced his candidacy for the U.S. Senate. Although most expected McEwen to lose the Republican primary to popular Ohio Lieutenant Governor George Voiniovich, McEwen would not quit and crisscrossed the state in one of the most aggressive campaigns in Ohio political history. McEwen shocked Ohio when on May 3, 1988, he defeated Voinovich by the razor-thin margin of 6000 votes out of 1.3 million cast. Although considered a huge under dog against popular Democrat incumbent Howard Metzenbaum, McEwen campaign as a young and vigorous conservative who was offering true change for Ohio. McEwen's age (38) was in stark contrast to Metzenbaum's age of 71 during the seven debates in which they engaged across the state. In the end, McEwen (in spite of being outspent three to one) pulled the upset of 88' and defeated Metzenbaum by a margin of 2,300,078 (53.8%) to 2,057,862 (46.0%).

In 1994, McEwen was re-elected by more than 20 points over his Democrat opponent Joel Hyatt. That December, McEwen was elected to be the Republican Whip of the U.S. Senate, defeating Thad Cochran 22-15. During the 104th. Congress, McEwen became know as the "Republican Bulldog" because of his ability to push legislation through the Senate. Thanks to McEwen's leadership, the Balanced Budget Amendment passed the the Senate and the House and was ratified by the all fifty states within six months. Since Bob Dole was campaigning for president for most of 1995-96, McEwen became the de facto Majority Leader. In June, 1996, Senator Dole resigned from the senate and McEwen was elected unanimously as the new Majority Leader. Thanks to McEwen's hard campaigning in the 96' Senate elections, Republicans gained seven seats for a total of 60, this gave them a filibuster proof majority.

Shortly after the election, McEwen and Democrat President Bill Clinton had their first major confrontation. Clinton wanted to cut defense spending and raise taxes as a way to balance the budget. McEwen on the other hand, wanted to end pork-barrel spending, get government programs and agencies under control, and cut taxes. This leaded to a 100 minute shutdown of the government in December, 1996, in which McEwen was able to convince congressional Democrats to joint him in passing the McCain-Lieberman Act, which stated that if a Senator or Congressman refrains from asking for any pork for a full year, he or she (or it, in Barney Frank's case) shall receive a bonus to their normal salary of 1,000,000 to 15,000,000 dollars depending on the members seniority. This measure not only virtually eliminates pork, but it also balances the budget and turns McEwen into a national hero.

Shortly after the budget battle, The Drudge Report brook the story that Clinton had carried on a two-year affair with White House intern Monica Lewinsky. As soon as the story was confirmed, McEwen called for Clinton to resign from office. Clinton responded by calling the allegation a vast right-wing conspiracy, McEwen countered by declaring that there was a Crisis of Integrity in America, polls showed 42% of Americans supported McEwen while 38% supported Clinton.

During 1998, McEwen continued to call for Clinton resign or his impeachment. In the November elections, Republicans gained 4 seats in the Senate and 32 in the House.

In December, Clinton was impeached by a vote of 216 -188 in the House of Representatives. After fierce debate, the Senate convicted Clinton on charges of obstructing justice 66-33 on January 19. Democrat Senators John Breaux and Fritz Hollings voted for impeachment while Arlen Specter voted against. The deciding vote however was that of Connecticut Senator Joe Lieberman who after much soul searching abstained from voting. When he did there was an audible gasp from the Senate, an American president had just been removed from office by Congress for the first time in history. What would happen next?

On January 20, 1999, Albert Arnold Gore Jr. was sworn in as the 43rd. President of the United States. Gore first crisis was facing calls from Newt Gingrich to press a prison sentence on Clinton. McEwen, who was preparing to run for president in 2000 remained out of this debate. In February, Gore agreed to imposing a 5,000,000 fine on Clinton in exchange for no further charges being pressed. Gore was also convinced to sign the Social Security Reform Act of 1999, which virtually privatized the system. As a result, McEwen became the front-runner for the GOP presidential nomination, being followed by Gingrich, Texas Governor George W. Bush, and former Vice President Dan Quayle. In August, McEwen and Gingrich passed (over Gore veto) the Fair Taxation Act of 1999 which created a flat income tax rate of 17% and abolished the Death Tax, and cut the capital-gains tax in half.

In the Iowa Straw poll, McEwen narrowly defeated Bush, winning 33% to Bush's 32%. After poor showings by Newt Gingrich, Dan Quayle, and Elizabeth Dole withdrew from the race leaving only McEwen and Bush as serious contenders. On February 15, McEwen resigned as Majority Leader to focus on his campaign, GOP Whip Trent Lott was elected to fill McEwen's position. On the Democrat side, Al Gore faced a primary challenge New Jersey Senator Bill Bradley, who was leading Gore in New Hampshire, and running neck and neck in Iowa. In the caucuses debates, McEwen proved to be by fare the most 'Reagan-esqe' and in December Steve Forbes, Orrin Hatch and Gary Bauer withdrew the race and endorsed McEwen. McEwen beat Bush 45% to 35%, while Gore narrowly beat Bradley 51%-48% in the Democrat caucuses. In New Hampshire, John McCain pulled an upset and defeated McEwen 41% to 38%. Bradley defeated Gore 57% to 40% and became the Democratic front-runner. McEwen and Bradley won the respective primaries in Delaware and began building up steam as Super-Tuesday approached. Shortly before South Carolina primary Alan Keyes withdrew from the race and endorsed McEwen, this was key to McEwen winning that primary. McEwen (45%) defeated McCain (37%) and Bush (18%), Bush withdrew from the race that same night. McEwen would go on to swept Super Tuesday and with withdrew from thr race in early March. The Democrats were far more divided. However, Gore won California, as well as the South and the West. Bradley carried New York, and the north-east as well as a surprising win in Florida. As the primaries continued on into June, Bradley and Gore traded the lead but neither gained a knockout punch. Finally on June 6, Gore won a majority of delegates and Bradley withdrew from the race, but the damage had been done, Gore was badly wounded while McEwen was ready for the coming fight in November. McEwen chose a dark-horse candidate Arkansas Governor Mike Huckabee (Huckabee's one drawback was his 300 pound frame, Huckabee however took this in-hand and by election day had lost almost 40 pounds and would get down to under 200 with a year). Gore chose Nebraska Senator and Bradley supporter Bob Kerrey as his running-mate.

After the conventions, McEwen running on the slogan Freedom & Prosperity held a 17-point lead over Gore and held it for two weeks. By mid-October, Gallup showed McEwen with 49% Gore with 41% and Nader 5%. In the debates, McEwen called for 'a new era of integrity' and more 'empowerment of the people, instead of government.'

On November 7, America responded to McEwen's call and elected him in a landslide over Gore.

Retrieved from "https://althistory.fandom.com/wiki/President_McEwen?oldid=1171753"
Community content is available under CC-BY-SA unless otherwise noted.