Project Noah is an ongoing live timeline, describing a parasitic worldwide infection, that causes a zombie-like plague. This timeline will try to develop a complete story with geopolitics, cultural and societal aspects of this outbreak.... 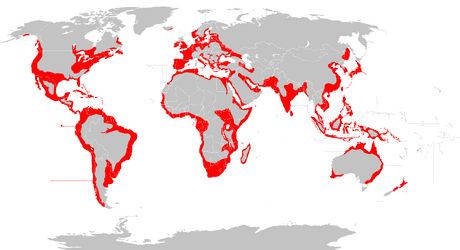 In late 2016, scientists discovered a new species of Diphyllobotrium, commonly known as the fish tapeworm. It was discovered in the deep waters of the Atlantic and the Pacific Ocean. It is a relative of the Diphyllobotrium latum, the freshwater fish tapeworm. Unlike the freshwater fish tapeworm, this tapeworm can survive in saltwater environment. This new species of fish tapeworm was observed to scientists as highly infectious, and was responsible for the host brain modification. The parasite controls the electric signals to the brain, thus giving the host in a "zombie-like" state as the parasite takes over the brains motor functions.

By April 2017, there were reports of a strange disease affecting people in Baltimore, MD. Soon, the cases were reported in the state of Maine. Those affected by the disease would develop animalistic tendencies, often attacking anyone near them by methods of biting. Bites actually spread the infection faster, as the tapeworm's eggs are present in the infected person's saliva. The eggs would then hatch into adults once inside the new host, in which the immature host would travel to the brain via the bloodstream. By then, it was determined that the fish tapeworm affects salmon, tuna, and mackerel. The FDA, the USDA, EPA, and the CDC then began countermeasures to properly handle fish. However, it was already too late as some infected manage to slip past the net. Soon, the entire East Coast was reporting cases. The parasite, now going by the name as "Zombie Fish Worm" or "Death Worm from the deep" was also reported in Portugal and the Philippines.

Soon, the parasite reached pandemic levels. Major cities became overrun with the infected. Militaries were routed, governments retreated to safe zones, many countries collapsed into anarchy. In their wake, some states seceded while survivor states emerged from the devastation caused by the plague. Mankind then entered a new dark age as the infected started to outnumber the living.

During the first few weeks after the outbreak, many theories were suggested as to the origin of this parasite. The CDC and WHO have established that the parasite is most likely the evolution of a common tapeworm under the pressure of climate change and increased oceanic acidity, catalysed by human activity and other factors. Other "fringe" theories include those proposed by alternative news sites and states like Iran and North Korea, suggesting that the parasite is just a US biological weapon that got out of control. The US denies any accusations against it in this case.

This timeline is the original idea of Ukron and Gillan1220 from Facebook. To those who wish to contribute, kindly sign your username below.

Retrieved from "https://althistory.fandom.com/wiki/Project_Noah?oldid=1692001"
Community content is available under CC-BY-SA unless otherwise noted.