The Quisqueyanos Federation, Quisqueyanos, is a federation of the seven states (two kingdoms, five republics) comprising the island of Quisqueyanos. It is the second largest island in the Taino Islands by area and the largest by population with nearly 12.5 million people. Its capital is Ayraguay.

The current head of state is Council Chief Niba Orocobix.

The official language is the Quisqueyanos dialect of Taino, while Álengsk and Portuguese are widely spoken in the cities.

Taino tribes had settled the island of Quisqueyanos (OTL Hispaniola) from around 300 AD. Disease (especially smallpox) spread by the Norse, Leifian nations and eventually Portuguese caused great damage to the population. However, growing resistance to the imported diseases helped populations stabilise (although probably not as large as had been previously) by the mid 1500s. Around this time the Tainos had divided the island into 7 largely stable and peaceful kingdoms. They were enthusiastic adopters of Norse derived animals and technology, especially goats, horses and watermills. In return they traded the unique foodstuffs of the area.

The occupation of neighbouring Coabana by the Emirate of Granada sparked a scramble for the Taino islands, with several states eager to control the lucrative trade routes between the Mexica and Europe. Castille took Boriken (OTL Puerto Rico) while Portugal and Álengiamark tussled for control of Quisqueyanos. Within a few years this tussle was threatening to boil over into general war in Iberia as Portugal and Granada allied against Leon and Castille (and Álengiamark). By the papal mediated Treaty of Quisqueyanos (1558) both nations were given control of part of the island.

Álengiamark took the Western two kingdoms: Maguana in the North-West, and Hanguaga in the South-West. Due to previous trade links with the Norse states these two kingdoms were happy with their new protectors. Álengiamark invested effort and resources into helping its two sub-kingdoms flourish. The Kings were offered the same standings as Álengsk earls and in general it did not interfere with the actual running of the kingdoms other than building churches. On a military and commercial front however it poured in resources, turning the chief villages into major trading cities. Within 30 years both Maguana and Hanguaga had their own trading fleets, the Hanguaga managing to secure exclusive rights to trade tobacco to the Byzantine Empire.

Portugal took the Eastern five kingdoms: Yancayeque in the North, Haiti in the North-East, Samana in the East, Higuey in the South-East and Jaragua in the South. Portugal was initially too busy with its Iberian affairs to invest much energy in the colony but when it did involve itself its rule was more heavy handed than the Álengsk. They robbed the local kings of all power, forcibly converted the population to Catholicism, demanded excessive tribute and confiscated land to farm tobacco to fuel the growing appetite for it in Europe. This caused widespread famine as food crops were ignored or sidelined. Practices changed as attitudes towards the Leifian tribes and states became more balanced. Continued petitions to successive Popes and Emperors ensured equal rights, enshrined in the Imperial Bull of 1584, and Papal Bull of 1601.

The whole island of Quisqueyanos was occupied by Mexica during the Kalmar-Mexica War of 1743-1752. While the nobility fled the island to Vinlandic Lucayan, thousands of islanders were conscripted into the Mexica army. A Kalmar naval force finally broke the blockade in the Taino Islands and liberated the island in 1750. It was returned to Álengsk and Portuguese control, although a much greater co-operation was setup between the two occupiers.

After the deep crash in shares of the Chesapeake Company in 1816, which ruined the finances of Álengiamark, the Álengsk portion of Quisqueyanos was given full autonomy.

During the Iberian Revolution the royal government of the Portuguese Empire, exiled from Portugal itself, raised armies from its half of Quisqueyanos to capture Castillian and Leonese possessions in the Atlantic. Quisqueyanos troops distinguished themselves at the siege of Madiera in 1832. It was fully supported by Álengiamark who supplied further support from its army and navy. At the end of the war the Portuguese Quisqueyanos states were handed autonomy in thanks for all their effort.

Forming a loose union with the autonomous Álengsk Quisqueyanos kingdoms, it began to try to apply the reforms and progress that had enriched the Álengsk side of the island to the rest. Though often resented a series of strong-minded and popular leaders ensured a lasting legacy of wealth redistribution. The Portuguese states are still noticeably poorer and more dependent on agriculture than the Álengsk ones but living standards are on the rise.

The flag of Quisqueyanos was adopted on full independence in 1892. It is a blend of the national colours of Álengiamark and Portugal and is designed to show the island's history as well as continued friendship between the three countries, as well as the seven federated states.

The neutrality of the nation is guaranteed in the articles of the Treaty of the 4th Kalmar Union. Portugal also guarantees their neutrality. 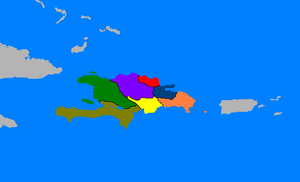 Quisqueyanos is governed by a council of seven elected 'chiefs', representing the seven states. The states take turns in occupying the council's chair and terms last two years. It is currently Samana's turn and as such the Head of State is Niba Orocobix. There is no unified parliament, instead elections for regional councils are run every four years.

The two kings of Maguana and Hanguaga, although wealthy landowners, have no governmental power. Their roles are now completely ceremonial.

Retrieved from "https://althistory.fandom.com/wiki/Quisqueyanos_(The_Kalmar_Union)?oldid=1230644"
Community content is available under CC-BY-SA unless otherwise noted.