Religion in Germany is dominated by the Christian faith, and to a much lesser extent, other religions. 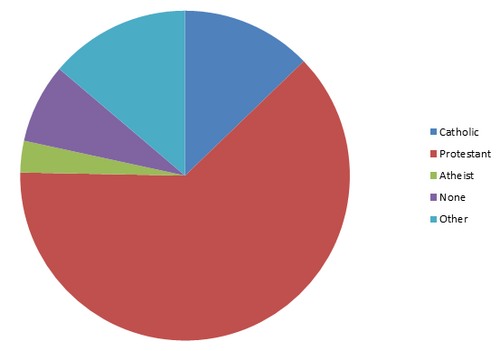 Catholicism is a minority religion, with scattered adherents in Bavaria, Salzburg, Tirol, Carinthia, and Rhineland, in no state forming any kind of majority. This is an after-effect of the Protestant Reformation, where the Counter-Reformation failed to gain any traction in Bavaria, the Rhenish provinces, Hungary, Czechia, Poland, or even Austria, leaving Catholicism as mainly a Romance-language religion.

By far, the largest church in Germany is the Lutheran Church, followed by Baptists, Methodists, Pentecostals, and the Apostolic Evangelical church. The Anglican church has some adherents due to English immigration into Germany.

There is a large 'Old Catholic' segment of around 2,313,914 spread across Salzburg, Tirol, and southern Bavaria, which adheres to the pre-Vatican II rites, as well as a segment of Assyrian Catholics, who came over as refugees in the late 70s. Syriac Maronite Catholics are concentrated in Baden, Württemberg, and Rhineland. Coptic Catholics number around 284,000, and reside mostly across Tirol, Bavaria, Salzburg, and Carinthia.

After the second World War, and the horrors of the Holocaust, where between 2 and 3 million Jews were systematically killed by the French and Polish, around 314,800 Jews were accepted as refugees in Germany, and settled in empty houses vacated by the French and Polish-speakers expelled after the war. Due to the collaborators in Germany, it is now a crime to deny the Holocaust or that the 3 million Jews were murdered in the Holocaust; this is punishable by up to 5 years in prison, as is the display of the Croix-de-Feu broken cross of fire flag or symbol. In 2006, the Interior Minister of Germany, Hildegard Steenbeck, pointed out the official policy of Germany, "We will not tolerate any form of extremism, xenophobia, or anti-Semitism." Leftist ideologies were thoroughly discredited and associated with disloyalty and anti-patriotic and anti-semitic sentiments, such that most Germans won't admit to being socialist or communist to this day.

Judaism is strongest in Posen and Alsace-Lorraine, with scattered pockets across Middle Germany, coinciding with the Yiddish language in Germany. Both major dialects, east and west, and minor dialects (southwest, middle-west, northwest; middle-east, southeast, and north east) are represented across Germany. Hebrew is used in synagogues, but Jewish Germans more often than not use Yiddish amongst each other, and German when speaking with government or in commerce.

Revivals in the 20th Century

Immediately post-World-War-2, Christianity experienced a massive revival due to the influence of American and British pastors, and the victorious feeling of having been freed from the occupation. Protestant pastors across Germany took in thousands of Germans and helped feed and clothe the Germans; thousands of Germans 'soft-converted' to Protestantism, not ever renouncing their catholicism, but in practice, stopping their practices and attendance. This was also affected by the lack of resistance by the Catholic church to France's takeover of Germany, and that a number of the collaborators in the puppet German state were publicly Catholic. A statement by Pope Pius XII was taken out of context and used against the Catholics for over thirty years in Germany, saying, "If there is anything good to come out of this trying time, it would be the revival of the true church in German lands, such that Germany can return to full communion with the one true church."

A huge surge of Christian revival happened in the mid to late 1960s, with the peace movement and a development of the Commonwealth of German-speaking Nations (Gemeinschaft deutschsprachiger Nationen) and German Decolonization of the settler colonies Germany held onto through both world wars.

Again in the mid 1980s, a number of German Christians saw the decline of youth in their churches and began Youth Groups across the Rhineland, which combined a youth Bible study with dinner, some physical activity, and youth choirs, and took them on trips across Germany, and after a few years, across free Europe, and later across all of Europe, engaging in rebuilding, charity, feeding the homeless, and other charitable works. The Youth Groups became a Methodist and Lutheran thing, and helped draw in families to churches around Germany. The successful maintenance of the Protestant majority is often credited with this movement.

Retrieved from "https://althistory.fandom.com/wiki/Religion_in_Germany_(Freedom_Ascendant)?oldid=1687949"
Community content is available under CC-BY-SA unless otherwise noted.