The Republic of Italy is a nation located in Europe.

In January 1991, with the Treaty of Syracuse, the King was kicked from Italy and the monarchy was disbanded.

In 1986, the nation created the Kingdom Computer Company, a computer manufacturer. In 1991 it has been rebranded as Italian Electronics. 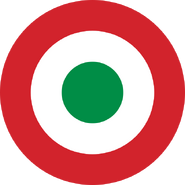 Roundel of the Aeronautica Militare Repubblicana 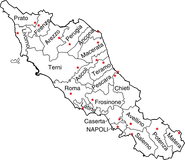 Flag used during the Syracuse Treaty