The Republic of Somalia claims to be the legitimate government of the whole of Somalia but in actuality only controls the southwestern regions of Gedo, Lower Juba and Middle Juba.

In February of 1990, toward the end of the second phase of the Somali Civil War the forces of the Organisation of Free Somali States or OFSS attacked Mogadishu and ousted President Mohammed Siad Barre. Barre and such parts of the Somali National Army as were still loyal to him fled to the southern port city of Kismayo where Barre declared himself to still be the President of Somalia.

Before being overthrown Barre had tried to do away with the loyalty to one's clan that pervaded Somali society but in his internal exile he found it increasingly necessary to rely on the support of members of the various branches of the the Darod clan which included his own Marehan sub-clan.

To begin with Barre and his Republic of Somalia completely controlled the regions of Middle and Lower Juba. The neighbouring region of Gedo was divided amongst several different Islamic groups and clan militias.

During what became known as the "Tribal Wars" period of the Somali Civil War the Somali National Army which is what the armed forces of the Republic of Somalia were still called fought on several fronts. In Gedo they fought against a movement called the Gedo Islamlic Union led by Mohamed Haji Yusuf, a former high court judge. To the north they frequently attempted to retake Mogadishu but after a while they were always beaten back by the forces of whichever warlord currently controlled the city. The closest the SNA came to regaining control of was in 1992 when they took advantage of infighting between branches of the Hawiye clan. Forces loyal to Mohammed Farrah Aidid attempted to overthrow Ali Mahdi Muhammad, who since Siad Barre had fled Mogadishu had been claiming to be President of Somalia. During this fighting SNA forces, under the command of Siad Barre's son-in-law General Mohammed Said Hersi Morgan managed to enter Mogadishu and were able to take control of some of the city's southern districts for a week or so before Aidid's forces ran them out of the city.

When he returned to Kismayo General Morgan berated Barre for what he perceived as a lack of support during his assault on Mogadishu although some observers suggested that he was merely doing so to cover up his own failings. In any event, as a result of this argument Morgan began to move away from Barre, politically speaking

In subsequent years as Siad Barre got weaker and weaker he started to hand over more and more of his power to his son Maslah Mohammed Siad. However some of SNA high command were unhappy at this as they felt that Maslah Siad would not be the right man to lead them back to controlling the whole of Somalia. The spokesman for this group was Colonel Barre Adan Shire Hirraale. President Barre's illness and the whisperings of his son led him to believe that these men were traitors to the Republic of Somalia and this in turn led to his announcement on February 15th 1994 that he had appointed his as his successor as President. Siad Barre died a few months later and his son quickly took over the reins of power.

As soon as Maslah Siad succeeded his father as "President of Somalia" he tried to strengthen his power base within the SNA. More so than his late father he attempted to promote men by virtue of their clan membership rather than their ability. This meant that General Morgan became even more distant from the inner circle of power in the RoS as he was a member of the Marjeerteen sub-clan of the Darod as opposed to Siad who was from the Marehan sub-clan. About six months after he came to power forces loyal to Maslah Siad attacked units under the command of General Morgan. Siad had come to think that Morgan had deliberately failed in his attempts to take control of Mogadishu and that he was working with Aideed to destroy the RoS. Morgan and his forces fled from Kismayo to the province of Middle Juba where he founded an organisation called the Somali Patriotic Movement whose avowed purpose was to "return the Republic of Somalia to the control of its people".

After Morgan fled Maslah Siad came to rely completely on members of the Marehan clan among them his former rival, Barre Adan Shire who he made commander of the SNA.

The unrest in Kismayo allowed the Gedo Islamic Front to consolidate its control over that region and it was further strengthened by several defections from the SNA, most prominent among them Colonel Hassan Dahir Aweys. 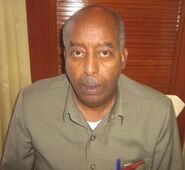 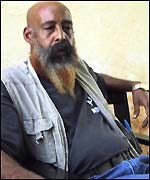 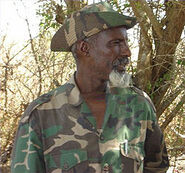 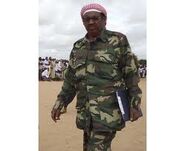 Colonel Hassan Dahir Aweys
Add a photo to this gallery

Retrieved from "https://althistory.fandom.com/wiki/Republic_of_Somalia_(1983:_Doomsday)?oldid=1297133"
Community content is available under CC-BY-SA unless otherwise noted.