At the end of The World War, Stalin found an ally in the American President Roosevelt and Kaiser Wilhelm III. All supported the growth of their nations, all believed their government's way was the best.

Stalin's paranoia was turned toward countries that threatened his borders more than his ideology. While he still purged those that would or could stand in his way, it was a simple matter for him to purge them, sending them to Siberian gulags.

Military knowledge was semi-freely traded between the USA and Russia from the end of The World War until The Spasm.

Russia's government fragmented following the Spasm and remains so to this day. While regions are constantly changing hands because of the ongoing skirmishes, the following have remained relatively stable during the last 15 years: 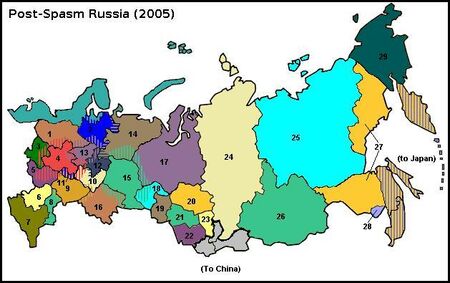