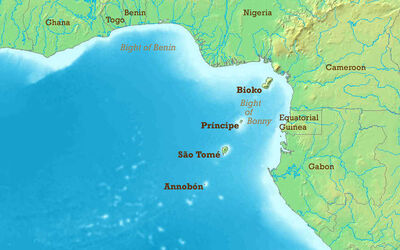 The islands of São Tomé and Príncipe lie in the Gulf of Guinea between Bioko and Ambô and off the coast of Gabon and Equatorial Guinea. The people of the islands, 95% of whom live on the larger island São Tomé, speak Portuguese and are mostly of mixed African and Portuguese descent. The country's economy has always been mostly agricultural.

The first human inhabitants of São Tomé arrived from Portugal in 1485. The island flourished as a sugar-growing slave colony, a prototype for the many rich and dismal colonies that later proliferated in the Caribbean. In the 19th century its economy shifted to cacao, which continued to sustain the islands for the bulk of the 20th century. Santomean independence came late; like the rest of Portuguese Africa it had to wait for the downfall of the Estado Novo regime. This meant that when the world system collapsed in 1983, the country had governed itself for only eight years.

Manuel Pinto da Costa was the leader of Sáo Tomé's independence movement and became the country's absolute ruler. He was a thoroughgoing Marxist in the Soviet mold, having earned a doctorate in economics at Humboldt University in East Berlin. He led the country to independence mostly without bloodshed and mostly from exile in Gabon and Equatorial Guinea. In the years after independence, he built an autocratic one-party state with a command economy. He eliminated all challenges to his rule by 1979. The cacao plantations that were still the mainstay of the economy were nationalized, their workers collectivized. Though Portugal remained São Tomé's main trading partner, da Costa sought closer links to the Eastern Bloc, especially Angola under dos Santos, a personal friend, but also the USSR and Cuba.

The sudden collapse of global trade in 1983 was absolutely devastating to São Tomé and Príncipe. President da Costa had nationalized everything but had not even begun to carry out plans to diversify the economy. The island grew little besides cacao and had to import almost all of its food. Da Costa's allies in Angola and Guinea-Bissau sent food aid at first, but both of those governments soon faced existential crises of their own and had no help to send. The president ordered mass mobilizations of the workers to organize food plantings and commercial fishing, a movement that became known as the Transition. It was a brutally difficult time and many thousands died of malnutrition. Many who could left for the mainland.

But slowly, society on São Tomé found some bearings. After the initial Transition to food production (as centrally planned as any of da Costa's policies), the president perceived the benefit of a modest liberalization. He allowed farmers to sell their own produce locally to encourage productivity. The big state-owned farms - really, nationalized ex-Portuguese plantations - began to be subdivided. Pinto da Costa did not embrace private land ownership, but he saw the benefit in giving the farmers more control over the land they worked. Small-scale trade with the mainland slowly began to grow, largely fish for grain.

This liberalization did not have any effect on São Tomé's political system, which remained firmly in the hands of the president. He continued to play the role of the staunch anti-imperialist. In the late 80s, Guinea-Bissau and Cape Verde reached new accommodations with the former colonizer - Bissau allowed thousands of Portuguese refugees to come and establish a state within its offshore islands, while Cape Verde actually reunited with the Portuguese remnant government, now mostly confined to Madeira and the Azores. Pinto da Costa vowed to resist this backsliding. But nevertheless, whispers of dissent were beginning to spread.

In 1997, as a show of strength, the president outfitted an expedition to occupy the tiny island of Ambô. He claimed that he was liberating it from the brutal dictatorship of Equatorial Guinea's President Mbá. In reality, Mbá had abandoned the island a year earlier, and this was the only reason that Santomean forces were able to take it over.

Brazilian ships began visiting the African coast in large numbers in the late 90s, the beginning of a new trans-Atlantic commerce. The Brazilian navy conducted intensive explorations of the region. Naturally they showed great interest in the Portuguese-speaking peoples along the coast. The South American giant had emerged from the World War strong and confident and saw in Africa a chance to extend its national reach. In 1999, President Fernando Henrique Cardoso invited Pinto da Costa to Brasilia, where he made generous offers. Brazil would improve São Tomé's port and airport facilities. It would support the partial reintroduction of cacao planting and buy the produce.

President da Costa was naturally wary of these overtures, since they would effectively make São Tomé a client state. But a promise of new prosperity was impossible to resist. The deal was signed, and soon Brazilian cargo started flowing in.

Before too long, Brazil also began to apply political pressure. Cardoso's successor, Lula da Silva, condemned São Tomé's continuing occupation of the tiny Portuguese-speaking island of Ambô. Da Costa's government relented, withdrawing from Ambô in 2004; the little island immediately signed a treaty of Free Association with Brazil, formally putting itself - and its recently-discovered offshore oil and gas - into Brazil's expanding sphere of influence. Lula next began to urge democratic reforms in São Tomé itself. Manuel Pinto da Costa pragmatically decreed a change to the constitution in 2005 that would allow competitive elections. The following year he stepped down as president after an iron-fisted rule of 31 years.

An enthusiastic reformist, Norberto José d'Alva Costa Alegre, won the presidency in 2006. In the early part of his term, he pursued closer ties to the nations of the emerging West African Union and publicly floated the idea of joining. But the WAU required free-market reforms beyond what Alegre and his cabinet were willing to make. Despite the big recent changes, state ownership and central planning still defined a large sector of the Santomean economy. Instead, Alegre made official what had long been brewing, signing a treaty of Free Association with Brazil in 2010. São Tomé and Príncipe was now firmly and unequivocally part of the Brazilian, and by extension the new South American, geopolitical bloc. In 2012, São Tomé became a League of Nations member, largely at the urging of South American leaders who wanted a reliably friendly vote.

In 2016, the Socialist Party, still honorarily chaired by former President da Costa, returned to power under Maria das Neves. She tried to roll back some of the creeping capitalistic changes of recent years, in particular tightening national control over Brazilian firms operating in the country. She also sought to forge links to leftist parties and nations elsewhere in Africa such as Luanda and the CSWAN in Benin and Upper Volta.

Throughout the 2000s, the perennial dream was that rich exploitable deposits of oil and gas would be discovered around São Tomé or Príncipe, as they had been around Ambô, Bioko, and the mainland. Nothing conclusive came to light, but most people were convinced that they were down there somewhere. In 2019 President das Neves signed legislation affirming Santomean control of its reserves, and intending to maximize the potential profits that would stay in the country, rather than be sent to the Brazilian companies that certainly would do much of the actual drilling.

Today, the economy of São Tomé is more diverse than at any point in its history. Some cacao plantations have returned thanks to Brazilian investment and trade, but the island also produces a variety of food for local consumption. Almost all the arable land in the country remains state property, but individual farmers and some Brazilian firms have the right to profit from the produce.

Commercial fishing has also become an important sector of the economy. Health care and education are expanding, thanks again to South American assistance.

Manufacturing and tourism remain nonexistent. Modern goods have to be purchased from abroad. And while the islands have great natural beauty, global tourism has never returned since the World War. And for now, the possibility of exploitable petroleum offshore remains, in the most literal possible sense, a pipe dream.

São Tomé is the second African nation to formally enter into Free Association with Brazil. But Brazilian influence - and South American influence more generally - is expanding up and down the west coast of Africa. South American-led commerce and diplomacy have put the island nation into contact with many more nations.

Relations with Gabon and the West African Union states have cooled as São Tomé has become an ever more loyal member of the South American bloc. The mainland states are mistrustful of what looks like imperialism from a different source and no longer trust Santomean leaders to act independently. Nevertheless, São Tomé remains on basically friendly terms with these nations. The only really bad relationship is with Equatorial Guinea, a rump state and a pariah in the region.

Productive relations between Portugal and Brazil culminated in the creation of the World Lusophone Community in the 2010s, and São Tomé is of course a member. The Community is devoted to humanitarian support (largely from Brazil, but also among the smaller members) and cultural exchange. Its activities have led to friendly interaction between Saõ Tomé and East Timor, an Australian client state, and with Macau, perhaps East Asia's most surprising regional power. The Community has also facilitated Santomean participation in expeditions to fragmented and lawless parts of Angola and Mozambique.