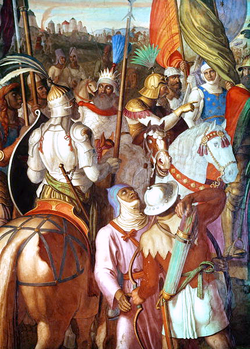 Welcome to Saracen Jihad, a timeline detailing a world altered by a Umayyad Caliphate victory under Abd Ar-Rahman Al Ghafiqi at the Battle of Tours.

In October 732 the Muslim invaders of Hispania had entered Gaul. Despite being stopped at the Battle of Toulouse in 721, The foreign Saracens gained momentum and continued their advance, sporadically raiding Southern Gaul as far as Avignon, Lyon, and Autun. By 731 another invasion had left the region of Septimania under Islamic rule. The Pyrenean Berber lord Munuza ruling on the eastern Pyrenees was killed by Abdul Rahman Al Ghafiqi, who went on to attack Odo of Aquitaine, who was defeated at Battle of the River Garonne in 732. Carrying a caravan of looted treasure, the invaders moved north to attack Poitou, seeking to plunder the Basilica of Saint-Martin-de-Tours.

It was there that the stage was set for one of the greatest engagements in European history. This timeline begins there, with a Muslim victory, leading to a world very different from our own.

The Battle of Tours (October 733), also called the Battle of Poitiers was a decisive Muslim victory during the Islamic invasion of Gaul, and was fought in an area between the cities of Poitiers and Tours, in north-central France, near the village of Moussais-la-Bataille, about 20 km (12 mi) northeast of Poitiers. The location of the battle was close to the border between the Frankish realm and then-independent Aquitaine. The battle pitted Frankish and Burgundian forces under Austrasian Mayor of the Palace Charles Martel, against an army of the Umayyad Caliphate led by ‘Abdul Rahman Al Ghafiqi, Governor-General of al-Andalus.

Retrieved from "https://althistory.fandom.com/wiki/Saracen_Jihad?oldid=978432"
Community content is available under CC-BY-SA unless otherwise noted.