Saudi Arabia, Arabic: السعودية‎ officially known as the Kingdom of Saudi Arabia (Arabic: المملكة العربية السعودية‎ al-Mamlakah al-‘Arabiyyah as-Su‘ūdiyyah, is the largest Arab state in Western Asia by land area (approximately 2,250,000 sq km (870,000 sq mi), constituting the bulk of the Arabian Peninsula) and the second-largest in the Arab world (after Algeria). It is bordered by Jordan and Iraq to the north, Kuwait to the northeast, Qatar, Bahrain and the United Arab Emirates to the east, Oman to the southeast, Yemen in the south, the Red Sea to the west and Persian Gulf to the east.

The Kingdom of Saudi Arabia was founded by Abdul-Aziz bin Saud (known for most of his career as Ibn Saud) in 1932, although the conquests which eventually led to the creation of the Kingdom began in 1902 when he captured Riyadh, the ancestral home of his family, the House of Saud, referred to in Arabic as Al Saud. The Saudi Arabian government has been an absolute monarchy since its inception, and it describes itself as being Islamic. Saudi Arabia is the birthplace of Islam and the kingdom is sometimes called "the Land of the Two Holy Mosques" in reference to Al-Masjid al-Haram (in Mecca), and Al-Masjid al-Nabawi (in Medina), the two holiest places in Islam.

Saudi Arabia has the world's second largest oil reserves which are concentrated largely in the Eastern Province. Oil accounts for more than 95% of exports and 70% of government revenue, although the share of the non-oil economy has been growing recently. This has facilitated the transformation of an underdeveloped desert kingdom into one of the world's wealthiest nations. Vast oil revenues have permitted rapid modernisation, such as the creation of a welfare state. It has also the world's sixth largest natural gas reserves.

Before the apocalypse, Saudi Arabia was flourishing with several thousands of tourists per day to perform Hajj, a Muslim pilgrimage to the Holy Land. We were and still are, the number one oil producers in the world. Are economy was at good standing, but as for our military it lacked. Then along came along Turkey, we allied with them and made offered them to join the Arab League, which was soon named, EHU. EHU stood for Eastern Hemisphere Unification. They were our main trade partners. Years pass and Turkey gave us several schematics to improve our Military, Navy and Air Force. They gave us schematics for ships and combat uniforms. Another several years pass, King Saud was assassinated in the Summer of 1972, by a radical royal guardsmen. The King's death upset the entire country until his son Prince Saud took charge. The idea that the Prince taking charge after a national tragedy brought hope for the Saudi citizens. Then the zombies breached the country's wall.

In early 1979, Turkey was exiled from the EHU, the Eastern Hemisphere Union. along with the exile we removed them as our ally, and stopped all trade to them.

In 1979, we conducted a plan to remove Turkey from the EHU, because of their unjust ways. This was also the year we started the Middle Eastern War. We were successful with our first invasion on Turkey, but more is to come as the year progress. We are looking to see Turkey, stripped of their military power and economy, along with them having no part in any alliance in the Middle Eastern nations. With all this happening Turkey also destroyed the majority of our Aircraft, our major (Capital) city, Riyadh. With there harsh attacks we are very fortunate to have no citizens hurts, because several months ago we made a mandatory evacuation to the south of the Nation. We are looking to strike back with brute force, and stop the tyranny in our once friendly nation. They struck the Holy Land of the Muslims, we and our Muslim brothers will fight back, we will save the name of Islam, we will fight for the death our Prophet's home, we will also make a profound statement that Turkey is not to be trusted.

In 1980, Propaganda poster have been posted all over the country, along with the countries in the EHU. More and more Muslims are becoming outraged by Turkey's act. Causing 1,000,000 million people to join militias to fight Turkey. Along with 300,000 in recruits to contribute to the war. 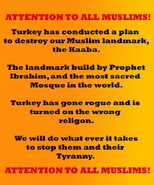 In 1981, the war still continues against Turkey. In Southeast Turkey we manage to push Lake Van. Hundreds of Saudi Troops also managed to take Iskenderun. Along with that we also seized Adana. The war as made it tough for the homeland, Turkish people are being prejudice against the Arabs, vice-versa goes for the Saudis as well. All Turkish refugees, citizens, and tourists are all under surveillance. We started to re-build our Airfield, and our major cities. The Turkish will not see the day of peace from now on. They have betrayed, back stabbed and tortured us. Brothers never turn on brothers, I guess Turkey is no longer our brother.

Wants An Alliance With-