Snapshot of the Spanish Main: 1525 (Papatlaca)

The Spanish population in the New World centered on the islands of Hispaniola and Cuba, and in the mainland cities of Veracruz and Panama. Male Europeans outnumbered females by a 5-to-1 ratio. These men were mostly in the 20's or early 30's and boasted about the number of lovers or mistresses (or wives) they had. This helped the rapid assimilation of cultures in the following generation.

(1)About 150 of the settlers in Hispaniola and 50 in Veracruz were Jewish immigrants.

(2)From 1525 to 1530 the population of "adventures" in Cuba declined to less than 100 as these individuals moved to the mainland, died, returned to Europe, or changed their outlook and became "settlers".

In the table above, the Europeans are divided into two categories: settlers and adventures. Settlers where people who had decided to make the New World their home and made long term plans for development and occupation. Adventures were people who hoped to get rich in the New World and then return to Europe to enjoy their wealth.

The slave trade with Africa was still relatively small when papatlaca struck the Spanish Main, and shrunk to zero shortly thereafter. Most of the slaves in the New World were natives to the New World . This made it possible for run-away slaves on the mainland to melt into the countryside because they knew the local language and environment.

Hispaniola was overwhelmingly populated by settlers as opposed to adventures. The adventures (or frontiersmen, or conquistadors) had generally left the island by around 1510 because it had become too "civilized" and restrictive for them.

Before the epidemic, Hispaniola had fifteen towns or villages. Eight of those had been abandoned completely by 1525 (mostly on the west side of the island) and Bonao was really just a hacienda and plantation owned by a single family.

A Jewish community had settled in Santo Domingo in 1523. They were not allowed to own slaves but they could administer the estates which belonged to Spaniards. They were generally urban craftsmen or merchants before they left Europe and attempted similar activity in the Spanish Main.

The island still had about 2000 of its original Tiano native inhabitants (down from half a million in 1492).

Diego Columbus ruled the Spanish Main from Santo Domingo. When Columbus died in 1525, Bernal Diaz administered the region until Don Luis was old enough to rule (he was 4 years old at this time). 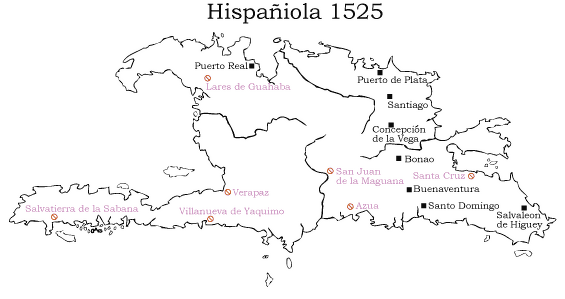 Cuba still had much of the flavor of a frontier region. Many people there still believed that regular contact with Europe would soon be renewed. Adventures sometimes still used the island as a staging ground for their various get-rich-quick schemes. These schemes ranged from mining, ranching, running plantations, to plundering, trading, or mercenary acts. Many plantations still produced goods for a no-longer-existent European market (sugar and tobacco).

Settlers also ranched or ran plantations, but their goods were for local consumption. The most successful cattle rancher was Catalina Cortes - the widow of the failed explorer Hernando Cortes.

This was already a large village belonging to the *Totonac tribe when the Cortes arrived. The tribe was friendly towards Cortes and remained friendly to the Spanish.

In 1525 this was the largest Spanish town on the mainland and it was an area of great Spanish-Aztoltec intermingling. It was inhabited by adventurous Castilians and free *Totonacs. Veracruz was wild, energetic, and full of optimism and opportunity. From here expeditions were launched to trade or plunder. Slaves were bought and sold. Mercenary contracts were drawn up. Natives, Spaniards, and Jews shared news about the Aztoltec Empire or the fate of current expeditions. The town was well defended by stout wood-and-earth walls and, more importantly, by a large number of cannons. Veracruz could boast of two churches, a timber mill, a small shipyard, and a foundry. The Aztoltec emperor tlatani *Motecuhozuma kept a close watch on Spanish activity and representative from Tenochtitlan could always be found within the town walls.

Panama was much smaller than Veracruz and was well removed from the Aztoltecs. The Spanish here had heard of the Inca, but no explorers had yet attempted to make contact. After the Battle of Panama and the capture of Pizzaro , Panama had become a relatively quiet town.

The Aztoltec now differed from OTL's Aztecs in several key ways. They did not consider the Spanish to be divine or to be instruments of the gods (they had seen lots of Europeans die from a common disease which usually killed only children or rustics). They realized that the Spanish were not coming in an unending flood from the East. They had a chance to become slightly familiar with Spanish cannons, arquebuses, horses, swords, and armor and grew to understand that these instruments gave the Spanish great advantages; but did not make them invulnerable.