For God is deaf nowdays and will not hear us. And for our guilt he grinds good men to dust. - William Langland

Papatlaca first hit the trade cities of Spain in November 1520. Because it had a three week incubation period, it had spread to many Spanish towns before the first mainlander exhibited any symptoms. The strategy that the rich often used, of fleeing infected towns to live in the country for a time, was not very effective because papatlaca was often already present in their entourage. People turned to their faith to offer pleas to God to be spared - and ended up exposing themselves to the disease in the large church gatherings. The epidemic was soon labeled the Spanish Scourge.

One hundred and fifty years earlier the Black Death was actually several diseases, and not just the Bubonic Plague. The Spanish Scourge was also a stew of illnesses with papatlaca as the main ingredient. As the corpses began to stack up and basic services began to fall apart; the Bubonic Plague, smallpox and (at least in Germany) anthrax was added to the mix.

Martin Luther and the Reformers could not help but think that the wrath of God was being visited upon the corrupt. In 1521 the Scourge quickly spread throughout Catholic Spain and the Mediterranean towns in France and Italy. 50% of the wealthy and 60% of the peasantry in these areas ultimately fell to the Scourge. Charles V, the Holy Roman Emperor (officially Charles I of Spain) died, Ferdinand I became next Holy Roman Emperor.

In 1523 the Scourge had spread throughout France and into Germany. Greece and Egypt also fell victim on this year. The mortality rate was somewhat less severe in these second tier areas and averaged about 30% for the wealthy and 40% for the less well off. Martin Luther caught papatlaca but survived. Pope Clement VII died in 1523 after serving only 2 months. 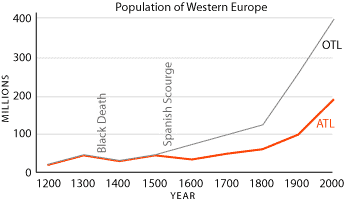 England had tried to isolate itself from infected lands, but it fell victim in the winter of 1524 (along with most of northern Europe). King Henry VIII survived but his wife Catherine of Aragon died. Catherine's death allowed England to avoid the crisis of Henry's divorce and the Church of England did not separate itself from Papal authority.

As stunning as the raw numbers of dead are, the actually damage to European civilization was much worse. Trade ground to a halt, fields were left untended and many towns were completely abandoned. Everywhere large centralized authorities and infrastructures faltered. It took almost two hundred years for the population to recover to their pre-Scourge levels.