A superpower is a sovereign state which exerts the greatest influence within its local geopolitical region. The first state to have an influence on this scale was Achaemenid Persia starting in the 6th century BCE. At its peak, the Persian Empire covered land on all three Eurasian continents, strategically positioned at the crossroads for Sino-European commerce. Centuries later, Rome emerged as the dominant Old World superpower in the west while Han China exerted its influence in the east. A millennium after them, the Mongols became the superpower of Asia. In Our history, no superpower stayed in power for more than a few centuries, each one eventually collapsing under its own weight. This Alternative history explores a possible timeline where two isolated divergences prevent the fall of some of the most prosperous civilizations, creating a world dominated by Superpowers. 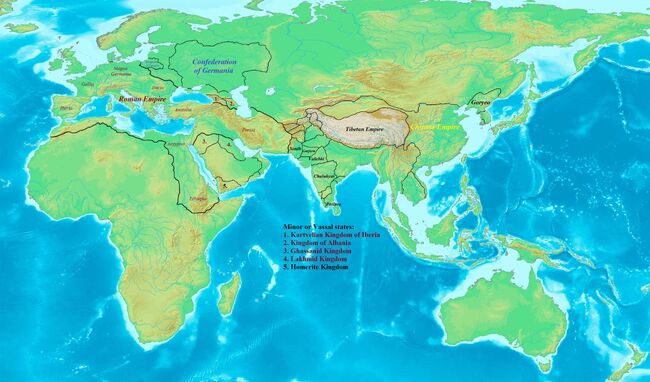 This timeline diverges from our reality at two isolated points in history; each event occurs at its own time and place without any influence from the other event. These Points of Divergence (PODs) are the births of the following individuals:

The speculative purpose of this timeline is to consider what changes can be made by a single person. The divergences in this scenario put a genius at the helms of nations during periods of great potential. If there is a plausible thesis underlying the events of this timeline, it is that good leadership can completely alter the course of history. The right person at the right time can make the difference between plunging a civilization into ruin and leading it into prosperity.

Widespread edits are being done to this timeline at the moment. For this reason, reading the detailed timeline starting from the year 180 CE is recommended to avoid reading obsolete parts of this alternate history. From that page, the index bar at the bottom and top continues to direct readers until the most recently rewritten part of the timeline.