Who's controlling China? We really need to establish zones first before making up random wars. Or else the vacuum spots just get picked on. Detectivekenny (Info; Talk) 01:02, March 31, 2011 (UTC)

There are two Chinese nations: Ming China (which is the most likely one this is about since this is eastern China); controlled by Pita (i think); and T'ang China (controlled by me). Fed (talk) 01:04, March 31, 2011 (UTC)

This is Ming China vs Joseon and Japan.

What's with the new format? I liked the old one better.

I have an An Shi Rebellion POD in which the Tang Dynasty was forced to remain in Central China and around Chang'an. Later the other dynasties revolved in the richer west, leaving the centralized Tang Dynasty to prosper in a very modest way. Fed (talk) 01:31, March 31, 2011 (UTC)

That's right, my plan is to divide China into 2 or 3 nations. 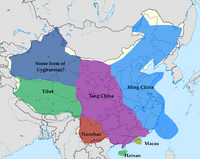 Yeah, that's sort of what I'm looking for. Anyways, have you noticed the new editing format?

By the way, some of Manchuria is Japanese, according to the Japan page I made a while back... plus I think a Cantonese kingdom and a Hindu Chinese Kingdom would be good. Batmanary

Yeah. I just wanted to establish rough borders. I've been kinda busy lately, but I'll try to make a map over the weekend. Cantonese kingdom? Lol, rather not, it would cause too much heartbreak, and besides, it would cut off Tang China. The Hindu Kingdom can be Sikkim. Detectivekenny (Info; Talk) 03:53, March 31, 2011 (UTC)

Sikkim is a part of the Mughal Empire. The Cantonese State could serve as the Hindu Kingdom, plus jus move the borders of Tang northwards, I guess.

Ok that really doesn't make sense. You want to f up China but you won't cut a small kingdom off your own country. China's already in 7 countries, we don't need any more. Sorry to sound rude, but can we not have a Cantonese state? I don't wanna have to deal with it because I'm Cantonese. I don't mind having Tang or Ming be ruled by Cantonese. Detectivekenny (Info; Talk) 16:37, March 31, 2011 (UTC)

Sikkim is a very small territory, which is why it doesn't serve as a Chinese Kingdom. If we had a Hindu Chinese kingdom it would be on China proper. I understand if you don't want a Cantonese China, but why not have Ming be moved to the south, establish a Manchu state in the north, and keep Tang's borders where they are. Ming could serve as the "Cantonese State", after years of being situated in that area of China.

Well, keep in mind the China proper is not a definitive term. It can be changed in alternate history. Look at the term Manchuria, it used to be a lot larger. A PoD might be China conquering Sikkim at a point in time. Then its unique location caused it to become Hindu, but keeping Chinese traditions. We could do a Manchu state if you want, but preferably it would include Greater Manchuria. Also, the Ming dynasty wasn't Cantonese. Guangdong and Guangxi are the areas that could be considered Cantonese. Maybe we could have Zhu Yuanzhang born in Guangdong as a divergence. Detectivekenny (Info; Talk) 22:04, March 31, 2011 (UTC)

I know the Ming aren't Cantonese, but suppose the Ming are forceibly displaced to the Guangxi and Guangdong, and a cultural shift occurs? My whole problem with Sikkim being the Hindu state, is that it is much too small. Tibet or Tang or Ming are big and are more influential. Plus, Japan owns most of actual Manchuria. I will hopefully create an article on that, later, but yeah. Plus with more Hindu states located in SE Asia, it makes more sense to have Southern China be more Hindu. Bats

Well, I wouldn't mind Tang to be a Cantonese/Yue-governed state instead of a Mandarin-governed one. It would create another difference between Ming and Tang, which will be good. Also, I'd like Taiwan to be some sort of a Polynesian nation and Manchuria to be independent, although I don't know if that's viable or not.

I suppose we can have a Hindu majority in the south, like in Hanoi and stuff. Maybe we can say Sikkim used to span a large area but was reduced to only a tiny speck. We could have the Mings displaced to Guangdong and then displaced to Beijing. That might work. I dunno. Do what you want with coastal Ming China. Detectivekenny (Info; Talk) 23:11, March 31, 2011 (UTC)

These are Japan's borders. I made this about a week or two ago.

Therefore this is my proposal for China...

Also, we decided that the Tang would be less prosperous right? The south of China is extremely prosperous. Detectivekenny (Info; Talk) 17:49, April 1, 2011 (UTC)

Here's another map of a 4 state China.

Why don't we have a second Tang dynasty that's Cantonese, and the character is different (maybe 湯). That way it's not the same Tangs. Also, the Wu people live north of Shanghai so that doesn't make sense. We could have a Hakka dynasty possibly. Detectivekenny (Info; Talk) 22:59, April 1, 2011 (UTC)

Sorry, I didn't meant Wu. I meant Yue. Anyway, so what's your plan? That the Tang broke off in some moment of history and a pretender goes to the south and the righteous king stays in Chang'an? Fed (talk) 23:28, April 1, 2011 (UTC)

(delayed response lol) I meant that some Canto named Tāng usurped the throne from the Táng, starting the Second Tang Dynasty. Guangxi (West Guang) Republic doesn't make sense, because it is the logical juxtaposition to Guangdong (West Guang). The Guang Republic would probably turn up as "Cantonese Republic" in English. Detectivekenny (Info; Talk) 02:30, April 4, 2011 (UTC)

I think we should definitely improve this article. May I add some backstory or maybe something in first contact? Bats 22:49, June 1, 2011 (UTC)