Where were the nuclear strikes around the Netherlands, and how would that affect Friesland? Also -- what would the Climate changes do to Friesland? If my proposal on Climate is accepted, then the sea level should stay the same or drop -- but still -- just want to be sure we're all on the same page. --Louisiannan 20:35, 9 June 2009 (UTC)

According to the Netherlands Antilles page, Rotterdam was blown up as well as nearby Belgian Antwerp and the German Ruhrgebiet. The page said that the only noticeable population was left on the north sea coastline (which assume means this page). It also says that because all the levies and dikes were busted half the country flooded so I dont think climate will be a problem.--ShutUpNavi 16:16, 10 June 2009 (UTC) 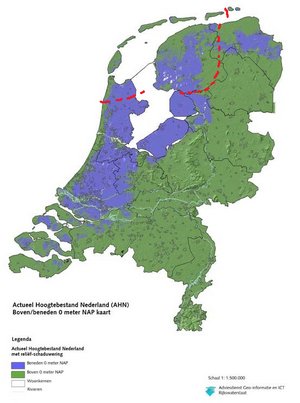 Does remind me of the fact that I forgot to write the paragraph on how the Frisians were going to deal with the fact that most of their lands are below sea level. I just made a very rough sketch of how the Frisian Free State would look like (since I'm not much of a cartographer I fear this was done in Paint...). Most of the areas depicted in blue on the map were turned back to the wetlands that already gave Roman cartographers headaches as to whether these should be depicted as land or sea. Problem isn't so much busted dikes and levies but the fact that if nature were to have its course, groundwater levels were to rise above actual ground level, thus filling the land up from the inside. The higher lying western coast would remain dry, extending the chain of the Frisian islands up to what would have been Belgium (the "islands" of Den Helder and Wieringen mentioned in the text are examples of this). The blue areas in the two northernmost provinces, the ones that are still sort of like populated, are exceptions to this rule. With order being restored in these areas people shifted back to the old-fashioned, indeed most stereotypical but also much effective, method of using windmills to lower groundwater levels. --Karsten vK (talk) 17:42, 10 June 2009 (UTC)

Why is this a League of Nations member?

According to the page no actual official foreign relations exist and it has devoted practically all of its attention to domestic issues. Yet it can still join such a large global organization as the League of Nations? I think we need to change the foreign relations section or remove Friesland from the LON.--ShutUpNavi 21:42, November 4, 2009 (UTC)

Retrieved from "https://althistory.fandom.com/wiki/Talk:Friesland_(1983:_Doomsday)?oldid=124526"
Community content is available under CC-BY-SA unless otherwise noted.