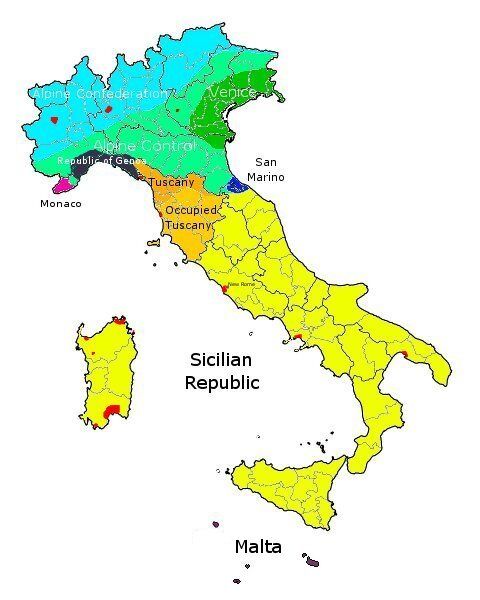 The sicily article also mentions the Genoese. I'm not sure how likely Genoa being hit is, but there should be some sort of Genoese state around there.Oerwinde 08:07, August 10, 2010 (UTC)

Why is Malta on the Italy page? I mean San Marino I guess I can understand (even if its a separate country), but Malta, and Monaco too aren't even in Italy's borders. Red VS Blue 13:54, August 24, 2010 (UTC)

They both control small portions of Italian territory, as does the Alpine Confederation and San Marino.

do you think it have been possible that a major nuclear detonation in Naples may have caused Mt Vesuvius to erupt?--Smoggy80 19:58, December 11, 2010 (UTC)

According to the organization monitoring Vesuvius, there's no danger of it erupting anytime soon, and that has been the case since WWII. I can see the Naples blast making it slightly worse, but not setting it off at all.

Did you think Italy will be united again ? And maybe under a democracy (For example San Marino or a new Italian Republic) Anyway need helps on Italy ? Col. James Hsu (talk), 21:55, 7 Junary, 2016 (UTC)