That was the Spanish goal for moving into Mauritania, true, but not the goal for actions against the SADR. Moreover, the territory in brown has been Spanish for longer than that.

does this map look ok? 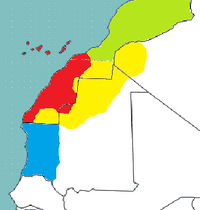 Smog, they don't control remotely even the extent you have them on this map right now. The extent on the Western Sahara map is correct.

Don't forget what I said about the Spanish above this, either.

The area in northern Mauritania is uncontrolled by any nation currently, it would make sense for the SADR to control that area, for no other reason than from stopping the Spanish having it. But it also gives access to the few oasis towns in northern Mauritania which would make sense if the Spanish were driving them back from the coastline, seeing as the Spanish are far more populus and militarily advanced than the SADR--Smoggy80 16:48, March 29, 2012 (UTC)

I don't consider that as making sense. Moreover, the Spanish have no reason or desire for the area. Nor would they let these guys do it. That's ignoring that in this area, virtually all the towns are already, on the Western Sahara map, under one or the other.

In all regards, this map is wrong. Heck, the areas that are part of Spain are even far smaller than they actually are.

In that case do you have any objections to making this a former nation and have the Spanish conquer all SADR lands, whilst Algeria clears the SADR from its borders. Either I could backdate the conquering or I could talk to the Spain editor and write something to happen over this summer --Smoggy80 13:24, March 30, 2012 (UTC)

Alright then how about this map, adapted and simplified from the existing map

I think I might adopt this article as long as no has any objectios. Can someone fill in any problems with it before I begin? Monster Pumpkin 14:15, April 1, 2012 (UTC)

I have no problems with it, keep it plausible, don't contridict canon articles (like Western Sahara/Republic of Spain/Algeria), any problems ask LG, he'll be able to help you with any problem details--Smoggy80 17:39, April 2, 2012 (UTC)

Retrieved from "https://althistory.fandom.com/wiki/Talk:Sahrawi_Arab_Democratic_Republic_(1983:_Doomsday)?oldid=492511"
Community content is available under CC-BY-SA unless otherwise noted.