Smog, those dates cannot be true.

Have a look at both the Algeria and Kabylie articles.

Kabylie refers to them starting relations with these guys in 1985, meaning that they were likely independent sometime in 1984. Lordganon 14:33, February 5, 2012 (UTC)

I've set the southern border of both Tamanrasset and Tamahaq with Maradikasa at 18 degrees north latitude, just need to decide on the border between Tamahaq and Tamanrasset now.--Smoggy80 15:23, March 22, 2012 (UTC)

I was thinking a line running from the Maradikasan border at 18 degrees North, 10 degrees east to a point on the old Algerian/Niger border at 21.8 degrees North and 9 degrees East. 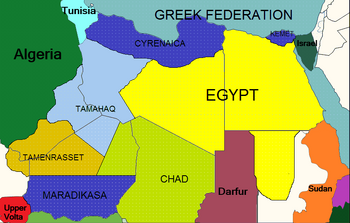 With the berber uprising in Mali in OTL being successful, its possible that one shortly after DD may have succeded also, the north of Mali is apparently abandonded (according to the maps and the Mali article) so Tamenrasset could've expanded into those areas between 1990 and present.--Smoggy80 16:52, April 6, 2012 (UTC)

As per a discussion (or rather the lack of one) and the absence of the caretaker of this article for over 3 months, this article is now under my care. Please, ask me if you have any questions. Thank you, Reximus | Talk to Me! 07:54, September 11, 2014 (UTC)

No. That is NOT how this works. You needed to ask here as well. You did not. Same applies for all of these pages you "adopted." And, fyi, I noted that this would not "fly" on your talk page. Not happening, Rex. Finish the articles you are already working on, and we'll talk. Lordganon (talk) 13:43, September 25, 2014 (UTC)

I would like to adopt this page. —Bfoxius (talk)

Exactly what I did. —Bfoxius (talk)

Retrieved from "https://althistory.fandom.com/wiki/Talk:Tamanrasset_(1983:_Doomsday)?oldid=1111221"
Community content is available under CC-BY-SA unless otherwise noted.