Back to page
View source

Question: why is Syria the one to set up a puppet Palestinian government? Jordan already had a head start in this area with the West Bank and Syria was always the junior partner in its relationship with Egypt. Was Egypt hit relatively hard? Does that mean that Syria is now leader of the Arab nationalist movement? Why didn't Syria succeed in getting Egypt to join a United Arab Republic like Egypt did with it?

A slight POD for Syria

Akram Hourani and the Baath take over after Soviet involvement in the Suez Crises. King Hussein, still only 21, and challenged on both sides by Syria and Iraq is in too weak a position to take over Palestine.

And yes, Egypt is hit particularly hard, by all sides. British, French, and Soviet bombings hit the major ports and military installations and Soviet bombers nuke Cairo and Alexandria (after occupation by the British and French), and the Suez Canal itself (to "gum up" NATO navy operations).

You have Eisenhower dying in Feb. 1958, so Nixon would only be eligible for 1 term in his own right. You may have intended that when you talked about new electoral college protocols, an amendment allowing the president to run again in such crises, but it wasn't clear. Otherwise, good timeline; not sure about Soviet abilities to strike Los Angeles or Washington in 1956, but I don't know much military history.

Read the alternate history short story called the Cuban Missile Crisis: Second Holocaust to get an idea of the Soviet Union's nuclear capability during this era - (not much to speak of).

From the 22nd Ammendment of the US Constitution:

Nixon would have taken office in January of 1961. This would mean that he would indeed have been president for almost three years. Since Nixon seems to be the one that shapes the events in the late 50's, we can assume that Eisenhower will indeed have to die, but not as early. Perhaps a year later. The timeline has quite some promise, though its brevity leaves much open to question.SouthWriter 15:32, January 25, 2010 (UTC) 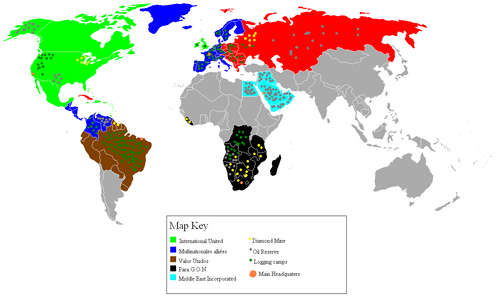 Influence of events in Poland and Hungary

There should be some mention of the constitutional crisis/leadership change with populist input in Poland in October 1956 and the Hungarian Uprising of October-November 1956, and the impact on the course of events in this timeline, paralleling interpretations in OTL. Jackiespeel 18:09, September 23, 2010 (UTC)