Founded in 1985 as a trade and protection organisation in chaotic southern Algeria, by 1995 Tamahaq had begun to expand out of Algeria.

The peoples of Tamahaq were joined by the few remaining Tebou People when parts of southern former Libya came under the control of Tamahaq in the mid 1990's.

Tamahaq is bordered by Egypt, The Republic of Chad, Tamanrasset and Algeria

After the severe droughts of the late 1980's, the climate of Tamahaq has got much better in the past few years, Tamahaq is based mainly on the high ground of the Tasili n Ajjer, (meaning "Plateau of the Rivers" in the Berber language).

Tamahaq receives rainfall between April and September, in the north African wet season, on average three inches of rain falls per year.

With Tamahaq being high mountains, runoff forms seasonal rivers that flow for approximately three to five months per year, usually from the end of May to the beginning of October.

List does not include villages of less than 250 people

On the 3rd March 2012, a trade deal was set up with Chad, and a major trade deal with Egypt trading food and oil products was signed in 2010.

With the new trade deal with Egypt, the Egyptian Pound has become as commonly used as the Tamahaq Franc.

The future of Tamahaq is looking bright, with the slightly increased rainfall over the Sahara region since the climate chaos after DD many oasis have reemerged from the desert, particularly in former northern Niger and former southern Libya.

This has lead to an increasing population in those areas, mainly due to immigration from other areas of Tamahaq (mainly from Tamahaqi controlled former Algeria) but also an increased birth rate in those areas as food become more easily available.

After discussions with the Egyptian government about the precise location of the Tamahaq/Egyptian border. With the area being very sparcely inhabited desert and semi-desert it has been decided that the borders should be straight lines, the Tamahaq eastern border will start at 23N, 14E on the old Libyan/Chadian border, the line will then run roughly north west until 29N, 11E and then run west along the 29N latitude line to meet the old Libyan/Algerian border again.

There are also currently border discussions with Tamanrassat in the west. It will hopefully run from a point on the old Niger/Algeria border at 22N, 9E and will run south east to the Chadian border at 20N, 12E.

Maradikasa has announced that its northern border will run on 18N. 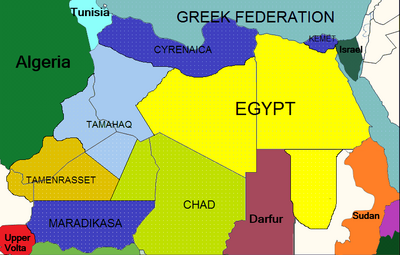 The government of Tamahaq is based on the Tuareg Caste system.

Traditionally, Tuareg society is hierarchical, with nobility and vassals. Each Tuareg clan (tawshet) is made up of several family groups, led by their collective chiefs, the Amghar.

After Doomsday a series of tribes in southern Algeria (and later southern Libya) were bonded together under an Amenokal, or Head Chief.

In the years after Doomsday the Tuareg Caste system developed until the title Amenokal became the same as President.

The Amghar's have become a parliament with the Amenokal as the head of the government.

There are forty five Amghar, they are voted in by members of their clan every five years, once voted in they choose an Amenokal from their number by secret ballot.

Amghars must be over the age of 25, there are no restrictions based on gender as Tuareg society is largely matrilineal.

The first vote of the nation of Tamahaq took place in 1990.

Elected in the first election in 1990, he was re elected in 1995, he died in office in 1999. His cause of death was unknown, but was thought to be natural causes as he had been suffering chest pains in the previous three days.

Zilalsen won two successive elections, he stood down after his second term as his health was starting to fail, he died in his sleep in January 2012.

Third and current Amenokal (2009 to Present)

Sikander Yawar Warmaksan (born Kingdom of Libya, 1962) Amenokal Warmaksan is the first leader of Tamahaq not born in Algeria, born in Ghat in the Kingdom of Libya, he and his family fled to Tamahaq capital of Djanet in 1985 after severe drought and famine had struck southern Libya after Doomsday.

Retrieved from "https://althistory.fandom.com/wiki/Tamahaq_(1983:_Doomsday)?oldid=1256745"
Community content is available under CC-BY-SA unless otherwise noted.