For most of history the area of modern Tamanrasset was just desert and mountains, a place which numerous nomadic peoples such as the Tuareg and the Songhai called home. During the colonial age the town of Tamanrasset was used as a military fort for the French military. Since then, however, the Tamanrasset area has become a town

The Southeast portion of Algeria was completely unaffected by the immediate effects of Doomsday and the fallout that occurred afterwards. Within months, however, the Algerian government lost central control of the country, leaving the people of Ahaggar Mountains area to fend for themselves. Though, the inhabitants of the region, mostly Tuareg people, both nomadic and settled, were glad to be free from control of the Arabized Algerian Government, disunity amongst the various local tribes made the establishment of a nation state difficult.

Prior to 1977 the Kel Ahaggar, named after the mountain region in the Tamanrasset Province, was the area's Tuareg population Confederation; but in 1977 it was dissolved by the Algerian government. With Algerian army being more coastal rebellious areas, the Kel Ahaggar Confederation was re-established and became the leading power in the region. However, the Dag Rali tribe opposed letting the Kel Rota, the traditional leader of the Confederation, from regaining power. The Dag Rali gained support from several other tribes and created a separate state headed in the town of Abalessa. This led to a number of clashes between the two groups that threatened to completely split the new-founded country apart. However, during the summer of 1984 the nuclear summer lead to serious droughts and both sides came to gather and arrange an agreement. The Kel Rota would share power with the rest of the tribes and in return the capital would move back to Tamanrasset, which would also be the name of the new country.

Within a year after Doomsday the Tuareg people of southern Algeria had united to form their own nation. This was a historic event considering the fact that the Tuareg people had been traditionally nomadic and had ferociously resisted the effects of nationalization in the countries of their residence. However, there were so serious issues the people of Tamanrasset had to face. During the mid and late 1980's the effects of Doomsday caused one of the worst droughts in history even causing hardships for the people of Kel Ahaggar. The Famine during these years is thought to have killed almost a quarter of the population. In order to stave off starvation the Tamanrasset government began to finance raids into their neighbor nation Tamahaq, creating bad blood between the two that still exists. These issues several hampered the curiosity of Tamanrasset about the rest of the world and survival became the only goal.

In the winter of 1987 a group of soldiers on camels were seen approaching the somewhat ill-defined borders of Tamanrasset from the north. A military response was sent out to meet them, as they were considered most likely to be Algerian forces with the intention on re-establishing their authority in the area. However, in the end it turned out to be representatives from Kabylie, a Berber nation situated along the coastline. The Tuareg were pleased to encounter another group - especially a Berber one - and to hear of the state of the world, and the collapse of Algeria. Agreements were made, and arrangements were made for caravans to run between the two in the future. Trade, however, would remain limited due to the distance between the two and crossing through the Sahara remains difficult even today.

A Nation of the Tuareg

By the end of the 1980's the worst of the droughts had passed and the people of Kel Ahaggar resumed life more or less as it had been before. Many people simply returned to nomadic lifestyle, while others chose to remain in settled areas. As time went on the nomadic portion of the population brought more information about the rest of the world, mostly in the Sahara desert area. Many in Tamanrasset advocated an expansion of their borders into other Tuareg areas to, in the words of one influential tribal leader, "create a nation of Tuareg in hope of the security and protection of our people." Negotiations of between Tamanrasset and tribal Tuareg groups of nearby areas began shortly after. The process was done with surprisingly little violence. However, there were some clashes between Tamanrasset forces and Tuareg of Niger and Mali. Most Tuareg tribes in these areas, however, were in favor of joining forces with Tamanrasset since their lifestyle would remain uninterrupted. By 1997 agreement was reached with most Tuareg tribes in Northern Niger and it was officially incorporated into their territory, though this expansion was opposed by a few groups who were forced to immigrate as a result. In 2002 a similar process was completed in Mali, bringing Tamanrasset to the current size it is today.

Although the desert town formerly had received on average 70 mm, or 2.5 inches, of rain per year, this has increased by nearly two fold since 2000 to nearly 140 mm or five inches of rain per year, mostly between January and May or the wet season. This, however, has not changed the ecology of the area vastly. 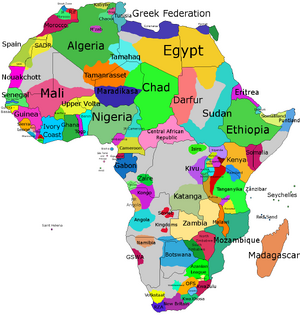 Retrieved from "https://althistory.fandom.com/wiki/Tamanrasset_(1983:_Doomsday)?oldid=1144139"
Community content is available under CC-BY-SA unless otherwise noted.