Step in a Different Direction

On August 29, 2008, Minnesota Governor Tim Pawlenty was revealed as McCain's choice for running man. McCain described him as a "one of the great governors of this United States of America, a great friend and a great leader", and cited his fiscal conservative policies as governor of Minnesota and his abilities of working across the aisle with the Democrats in Minnesota as some of the reasons of his pick.

On September 3, 2008, McCain and Pawlenty became the Republican Party's Presidential and Vice Presidential nominees, respectively, at the 2008 Republican National Convention in Saint Paul, Minnesota. Although the Pawlenty pick did not energize core Republican voters as fast following the convention as expected, the pick had secured some of the conservative voters who had previously been wary of him and a growing number of independent voters.

While certain Republicans begged McCain to go on the offensive against Obama, McCain would renounce this, saying that "The American people deserves that we debate the issues, and not turn to personal attacks". By October 20, McCain rose on the polls while Obama's support had declined throughout the last weeks. As a result, the Obama campaign made a negative turn and launched a series of advertisements blasting McCain and Pawlenty. By November 1, the polls showed that McCain and Obama were dead even in the polls in battleground states of Indiana, Ohio, Pennsylvania, Virginia, North Carolina, Florida and New Hampshire. 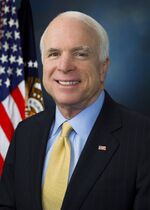 On November 4, 2008, The McCain/Pawlenty ticket received 281 electoral votes to Obama/Biden's 257. McCain won most of the battleground states and held most traditionally Republican ones although Obama made inroads into the west and south. McCain gained 50.2% of the nationwide popular vote, compared to Obama's 49.1%.

The inauguration of John McCain as the 44th President, and Tim Pawlenty as the 47th Vice President, took place on January 20, 2009. He officially assumed the presidency at 12:00 noon, EST, and completed the oath of office at 12:05 P.M., EST. He delivered his inaugural address immediately following his oath, whose theme was "In the Right Direction", or one different version of it "In a Different Direction", commemorating the 200th anniversary of the birth of Abraham Lincoln.