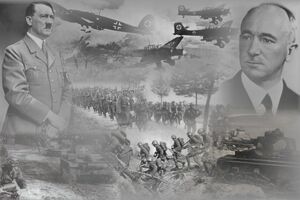 War in a Far Away Country
An alternate history of how the Sudeten Crisis escalated and triggered World War II in 1938.

In this timeline, the last minute negotiations in Munich on 28 September never occurred, thus resulting in a German invasion of Czechoslovakia on 30 September 1938. The timeline explores the global history after an agreement between the Czechoslovak Government and representatives of the Slovak and German minorities, forcing the French and the British to support Czechoslovakia.

On 30 September 1938, Germany invaded Czechoslovakia. On 2 October France, Britain and the Soviet Union, followed by the fully independent Dominions of the British Commonwealth declared war on Germany, but provided little support. Britain and France began a naval blockade of Germany on October 6, which aimed to damage the country's economy and war effort. Germany responded by ordering U-Boat warfare against Allied merchant and war ships.

This alternate history will contain historical background stories, historical political, economical and military facts and historical Orders of Battle for Czechoslovakia, Nazi Germany and Hungary. The events and battles of this scenario have been written as realistically as possible.